Obsessed with Wordle? Here are 10 similar games to play

A few weeks ago, several of my friends started posting strange tweets that featured a grid of randomly colored blocks. Across the top of the tweet, it always said “Wordle” followed by several numbers. Eventually, curiosity got the best of me, and that’s how I discovered Wordle—the daily word puzzle that’s skyrocketed into popularity over the last few months.

If you’re not familiar with it, the concept is simple: You get six chances to guess the day’s five-letter word. After every guess, each letter you input is highlighted in a certain color. Gray means the letter isn’t in the puzzle word, yellow means the color is in the word but not in that spot and green means you put the right letter in the right spot. There’s a new puzzle available every day, and while the idea is basic, the game is strangely addicting.

The only real downside of Wordle is that you can only play once per day, so if you’re craving more brain-busting word puzzles, here are 10 similar word games that will hold you over until tomorrow, including IRL games like Boggle and Bananagrams.

If you thought to yourself, “Hm, Byrdle sounds just like Wordle,” that’s because it’s the exact same game. Yup, this self-proclaimed parody works exactly the same way as the original, giving you six attempts to guess the five-letter word of the day.

There are several other Wordle knock-offs, as well. For instance, there’s also Hello Wordl, which has the same concept but lets you choose how many letters the word has, ranging from four to 11. Additionally, you can play Hello Wordl as much as you want—there’s no daily limit.

I like only being able to play once a day since I would probably get burn out if I played one after another.
Good to know there are alternatives though, might me a good time killer. I have a crossword puzzle app I like for killing time.

byrdle words are choral music related... makes it a bit harder if one is not familiar with polyphony
Last edited: Jan 27, 2022

Really enjoying this game, early in the morning, before my brain gets too muddled.

Have played HelloWordli and it is the same as Wordli. My wife and I like to compete and the hello version gives us different words, so no competition. I also agree that one a day is fun and too many could burn you out. With hello, you can go up to 11 letters and I do not know any words that long.

Curious as to how many people do this in their head? Or do you use something like pen and paper? I use a tablet and S pen, drawing on top of an image of a blank Wordle puzzle. Is that cheating?

The name of the free app is Squid (Android). I've attached an image of a blank Wordle puzzle. 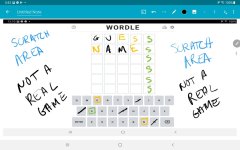 Gives me something to do in the morning with my coffee. Wakes up my brain for work.

Bruno said:
Gives me something to do in the morning with my coffee. Wakes up my brain for work.
Click to expand...

My approach is somewhat scientific...vowels and most commonly used consonants. My wife uses brute force. She's beaten me! This is more in my wheelhouse but she beat me!

Like I told her, even a broken clock is right twice a day.

I'm a newbie. I figure if I can sort out the vowels, I work out the rest.

Last two I got lucky because the only word I could think of was THE word.

I had a DQ yesterday when she was having trouble while I was doing mine and I said, without thinking, "Here, let me see..."

I start with the same word every day - 4 vowels, 1 consonant. It usually gives a good start.
C

Should have had it in 3 today, had the wrong variation. I use one of several words to start, then using a little deduction, I go from there to figure where various letters or combinations should go.

Todd NC said:
I start with the same word every day - 4 vowels, 1 consonant. It usually gives a good start.
Click to expand...

I try to use a different word first every day and get lucky, got a key letter this am.

I LOVE THIS GAME! I think a big key for me is one a day keeps it fun, I’ve also been telling my wife this for years. 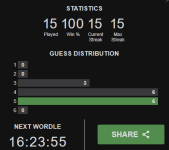