Timothy F. Lewis said:
Look you guys, I woke up DREAMING about roasting chickens this morning and I mean a LOT of chickens, like restaurant quantities of 20 birds roasting and making some sort of gnocchi with baby spinach and sweet potato cakes! I am laying blame here, where there has been so much coverage of spinning, roasting, smoking chickens!
Click to expand...

Ever since I saw THyde’s post and pic of that amazing looking crispy chicken, I’ve been ruminating about making a roti chicken on my new MasterTouch and Weber charcoal roti I bought a couple of months ago. Maybe not this weekend, but it’s definitely coming, and soon!

Greg, glad to help you out. Drop a review on this forum when you get a chance.
G

Bruce said:
Greg, glad to help you out. Drop a review on this forum when you get a chance.
Click to expand...

Will-do right after cooking a chicken. I’d also like to do a duck with drip pan veggies I’m so hungry….!
G

Thanks Bruce. I just ordered one also, even though I do have a Meater+

Excellent. It looks like we should get a good indication of how well they work with three already pulling the trigger.

I want to see pictures of rotisserie chickens!

THyde said:
I want to see pictures of rotisserie chickens!
Click to expand...

THyde said:
I want to see pictures of rotisserie chickens!
Click to expand...

You do realize that sounds a little weird…

Got the new TempSpike today and like any kid, I couldn't not play with it.
I thought about starting a new thread but hey, why not keep this one all together and I'm sure a number of others are following.
So this may seem like a corny review but I had to improvise with what I had on hand so, here we go:

I found the probe and base nearly full charged so in less than 30 min I was ready to go.

Connectivity....... Was super easy. I scanned the QR code and it took me directly to Google Play (Android) and I installed the app. Chose 'Add Devise' and it connected, east as that. Now that both internal and ambient temps were updating on my phone, I wanted to play with the range a little bit. My home has a walk out basement where the patio is and the garage in front at ground level. I went up the stairs, though the house and out into the garage and never lost the blue tooth signal. WooHoo! Now that's not saying I can walk across the street and have a beer with the neighbor and stay connected but I was sure smiling. Maybe more on range later.

Accuracy......... To start with I put the probe on the grill grate of my gasser along side the #1 and #2 probes of my TP-20 at ambient conditions for about thirty minutes. 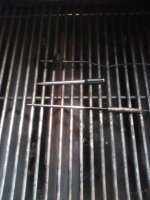 And here's what I got. 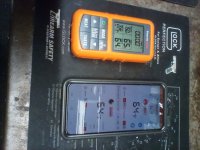 That is good enough for the girls I go with, and knowing that the TP20 ambient probe is a little crusty.
Next , I had some Johnsonville Original Brats left over from Thursday nights Chiefs game. Hey, I didn't have that chicken yet so I had to improvise. And man, I had to check this thing out. So, two probes in a Brat and let's see what happens. 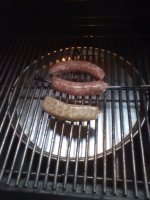 Set the grill up for in-direct in the middle, side burners on low. 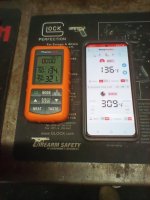 The ambient temp sensor in the TempSpike lagged behind the TP-20 considerably, very slow coming up to grill temp, TP-20 was almost instant. 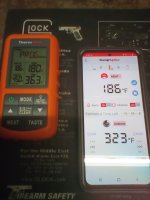 Now to get a little color on these and eat before TNF. 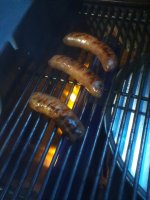 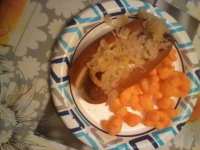 I am impressed with the internal results, but that ambient discrepency is a bit concerning? When doing something like ribs or a brisket, ambient temps are critical. Is there a provision for calibrating the probes?

The ambient on my meater plus is way off. 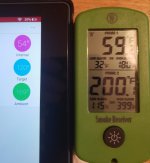 Close enough for hand grenades, horseshoes and BBQ IMO. Like the Glock pad BTW I just bought the same multi probe thermo with 4 probes. They had a quickie deal going on Amazon and well....................

Bruce said:
I am impressed with the internal results, but that ambient discrepency is a bit concerning? When doing something like ribs or a brisket, ambient temps are critical. Is there a provision for calibrating the probes?
Click to expand...

Bruce,
I'm not aware of any way to calibrate the sensors in the probe but I have not read the complete instructions either. I'm not thinking the TempSpike is a game changer for me but it is going to be fun using it along side of my proven thermometers.
A couple of things I noticed but didn't mention is how easy the probe was to clean. Just wash it and not worry about it, it's water proof. Another thing I thought was cool is the clear plastic cover for the base/booster. It looks like with it on the unit might survive a rain shower. Nice! It would be nice if the base was magnetic but it does have rubber feet so it doesn't move around on slick surfaces. It seems to be pretty high quality for the price. Not withstanding the ambient temp reading low.

Edit: Nope, no way to calibrate. I am really curious how it will perform on a long cook, say a butt. Next one I do it will be in there.
Last edited: Sep 23, 2022

As long as you are aware of the discrepency of the ambient temp, that can be dealt with. The big thing is the internal temp really and the fact that it is wireless.
Let us know when you put it through a long cook how well it performs.
G

I received the ThermoPro TempSpike from Amazon 2 days ago and just got around to opening the box this morning and hope to use it on a rotisserie chicken this afternoon and will report back regarding function.

I did read through numerous Amazon Temp Spike reviews and saw several buyers complained about signal loss. On the ThermoPro website, ThermoPro does state that the range of the TempSpike signal can be significantly decreased to as little as 10’ (3 meters) not only by distance, but also if it’s under a closed grill lid. Here are instructions for the TempSpike on ThermoPro’s website. TempSpike Instruction Manual

Well, I wouldn't be happy about the range being reduced down to anything near ten feet. But at least you can still monitor the temps without lifting the lid. But, I would want to be able to sit in the house on a cold January day and monitor the temps, not in a lawn chair on my snow covered driveway.
Let us know how the range does when you do your chicken roto cook.

Nor sure if this will work on that brand, but the range on my meater plus is limited. I work around it by having a tablet close to the cooker. Tablet stays on and connected to the wireless probe, and then the app on my phone works anywhere.

Tom Horsman has a YouTube video out now and also experienced significant range reduction when he went indoors. I will have to play with mine more. My initial success may have been a fluke. I'll get back to y'all.
G

I wound up making a 6lb. Oven Roaster on the Genesis late this afternoon. I used a minimum of seasoning (salt & pepper, lemon pepper and a smidge of butter rubbed under the skin. I was not able to fit the Turbo Trusser onto my standard 3/8” Weber 7519 forks (fit on the rod just fine). I sure tried, though (really friggin’ bummed about that). I forgot to get butcher’s twine lucky I had a couple of elastic ties stashed in my Ronco Showtime Rotisserie (of “set it and forget it” fame - killer machine).

It was almost fully charged right out of the box. I plugged it in and 5 minutes later, it was fully charged. I dowloaded the app for iOS and pairing was a cinch. Read out is clear and transparent (in reference to setting time and target temperature).

I found there was a difference of about 20 - 25 degrees F. between the hood thermometer and the ambient reading of the TempSpike, with the TempSpike being the higher of the two.

Checking internal temperature, the TemSpike was about 10 degrees F. lower than my ThermoPro TP-19H during the first 20 - 30 minutes of the cook, with 2 spot checks. by the 45 minute to 1 hour mark, and thereafter, temps were within 1 degree F. or spot-on of each other.

I had absolutely no problem with the WiFi and Bluetooth connections and range. I had the “Booster” (base) sitting on the Royal Gourmet cart, 3‘ from the grill and the connection remained uninterrupted when I wandered 40 - 50’ away downstairs into the family room for about 15 minutes.

Overall, IMHO, I think the ThermoPro TempSpike is worth the money, certainly more so than Weber’s not-so-good iGrill and somewhat-better Connect. Unfortunately, the ThermoPro 30% off sale has ended but still offers 20% off of the TempSpike via Amazon. I might just try to pick up another one of these as it’s less expensive than the Meater.

BTW, there is no information I’ve found about calibrating the thermometer (if it’s even possible).

I am eager, however, to find different forks for my 7519 rotisserie that’ll fit the Turbo Trusser. Anyone have any ideas?

Just tried my TempSpike again, same way I did Thursday night. With the spike in the gas grill w/ lid closed and the booster on the side shelf, I went in the house and up the stairs to our living room and sat in my easy chair for approximately 30 min. and never lost the Bluetooth connection with my phone. I then walked down the hall way and out into the garage, still connected. Then to the end of the driveway. So, total distance was appropriately 130' with our house in between me and the booster, never lost the Bluetooth connection. I can't explain it. I personally have never seen any Bluetooth device of any kind with that range. I don't know, this is weird!
Last edited: Sep 24, 2022
You must log in or register to reply here.
Share:
Facebook Twitter Reddit Pinterest Tumblr WhatsApp Email Share Link
Top