We've all been on Snapshots so long we completely forgot we could do releases too. It has been over 3 years since the last stable release but that hasn't meant that nothing has been going on, there have been 104 files changed, 8348 insertions, 4477 deletions since the last release. In that time we've doubled the number of HeaterMeter users, and in June of 2020 one out of every five HeaterMeters ever made was used (21% of all devices seen online).

For new installs it is easiest to download a preconfigured image from HeaterMeter Downloads. For upgrades, download the appropriate image for your Raspberry Pi and flash using the webui System -> Backup / Flash Firmware -> Image File or paste the link in Image URL
You can tell you're running the release version when the menubar in the webui says "LEDE Reboot v15 Release". If you're running Snapshot 20201229 then this is no different, only the version number has changed.

Fixes
Empty graph after a reboot when changing some settings
Empty / unchangable items on config page
Setting Lid Threshold to 0% now disables it instead of triggering it constantly
SMS messages not being accepted by some carriers
/lm/stream and /lm/hist support CORS if enabled
Update CA certificates
Improper probe colors in Archive view
Silence net.nf_conntrack_max is an unknown key error
LCD backlight visually resetting when being changed through the menu
Add linkmeterd to syslog messages
Prevent thermocouple from getting stuck at max high resolution temp (~450F)
Replace eeprom_read/write_byte with AVR103 suggested implementation

Congrats on getting v15 out the door! It's great to see the project is still alive and well with a growing community around it!
J

<scurries off> and UPDATED!

Not sure when it's gonna get hooked up again, this weekend is going to be a little busy.
R

That's a pretty impressive change log. Thanks for sharing your work, appreciate all that you do!
R

I have some odd behavior with my HM today, I did update to the latest release version but am not sure if it is related to this issue.
In Chrome the temperature display (above the graph) does not show Probe1, I only see two sections which display probe 2 and 3 (in addition to the Pit Probe above). The graph, however, is showing temps for all four probes. I connected with Firefox and it displays all four probes properly. Odd...
I cleared the cache in chrome and rebooted, same deal. I checked the probe setup in config and everything is fine, it is displaying all four temperatures on the config page.
I am lost on this one, maybe there is some special keystroke I am unaware of that I hit by accident? Puzzled that it is just happening in Chrome? Any suggestions???

I've not seen anything like this. You mean in there's no temperature displayed here on the box? (this is Chrome) 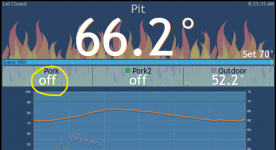 There's no ability to turn this off through the UI at all so all I can think is that you've either got some User CSS that's making it disappear or maybe the probe name is somehow messing with the HTML so it doesn't display the next element after the name? I can't think of any other reason the temperature would not be there because that is pretty straight-forward. Maybe disable your User CSS temporarily, clear cache, and refresh the page. If that doesn't do anything try renaming the probe just to make sure it doesn't have any hidden cruft in it.
R

No, I mean the whole segment where the probe1 temp should be is missing (in Chrome),,,, 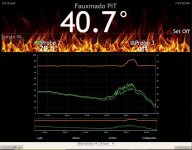 Well that's certainly not what I expected to see. It's gotta be something in your User CSS. Want to post that and I can see if there's something I've broken in the page structure that causes that? I did move some things around inside each box last year some time so there's a chance of that, but I just looked and it validates properly.
R

I did delete the user css section and reboot, probe1 was still missing so I figured that wasn't the problem. It's just odd that it is only chrome, firefox and MS Edge show all three probes.

I've cleared the cache in chrome and tried every refresh keystroke I am aware to no avail.... Chrome is reporting that it is up to date, Version 87.0.4280.14... not sure when it last updated... thought maybe it was a chrome update that brought on the issue but others would be reporting it by now.

BTW, I have two HM's doing this, unfortunately I updated them both right around the same time so IDK if this is related to the new release or not. Would it cause an issue to flash the previous snapshot release? Maybe a downgrade could help us troubleshoot and see if it is a HM release issue or a chrome issue?
Last edited: Jan 25, 2021
R 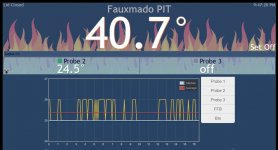 I really have no idea how that's possible, especially how the Pit probe is missing in the noise list but Probe 1 is missing in the temperature display. I don't even understand how the table cell could be just gone like that considering there's no code anywhere that hides a probe. Do you have any extensions in your Chrome that might be hiding it somehow? I can't think of how to help you because I don't think it is related to the webpage itself.

Can you poke a hole in your firewall so I can view your HeaterMeter from my Chrome browser (send me a private message with the URL)? That way if it is a Chrome + HeaterMeter thing I can see it myself and inspect the DOM to figure out how to fix it.
R

I dont recall installing any browser plugins recently, however, when I load chrome in incognito mode it does show all 3 probes... so I guess that indicates it is a browser plugin issue. I will look into that when I have time and report back when I find the culprit. Thank you for your help...
R

Is there documentation on how/where to set up the client to talk to my MQTT server? Sorry if this is obvious but I'm still trying to find my way around.

No, better integration with webui to be able to set it up is coming down the line. For right now you have to set it up yourself manually with a command like:

Code:
There's a little more detail in the ticket but do not post to the ticket for help figuring it out, use these forums. That line outputs the current status every few seconds, and commands back are not supported yet.

I've just discovered that the v15 release is missing the "Reset config?" item in the device's LCD menu. The "Network Information" is in there twice (it was originally at the end but I moved it up and forgot to update the transition definition). I've published a new snapshot and AVR firmware to fix this if it is needed. Only the AVR Firmware 20210201B is needed to access the menu item, but if you perform the reset it will also overwrite the newer AVR firmware when it resets.
R

Question, every time I apply new HM firmware, why does it revert my design back to OpenWRT? Not a big deal, I can switch it back to Bootstrap and all my other settings appear to stick.

I did not realize it did that but I just dug in to find out. That's because every theme forces itself to be the one used on the first bootup. Because they execute in alphabetical order, openwrt just so happens to be the one that wins every time. Looking at current OpenWrt master, they've changed it to only force itself to be the default the theme isn't installed already (if I am reading this right) so it might stick once in upcoming versions.
You must log in or register to reply here.
Share:
Facebook Twitter Reddit Pinterest Tumblr WhatsApp Email Share Link
Top