I've been working on a new upgraded feature for the past week and I thought I'd put out a little preview as what's in store because I'm tired of looking at the code for today. This is not available in the snapshot yet (pending UI changes) but look for it to be available after Thanksgiving. Don't want to make such a big change right before one of the biggest smoking days of the year and also not be around to emergency hotfix it if needed!

What is (the current) Lid Mode?

HeaterMeter has Lid Mode detection for the purpose of automatically shutting off the output when the smoker lid is opened and the temperature drops. This can be activated manually by pressing the LEFT button on the device, or clicking the "Lid Closed" text on the top left of the webui home page. The current way the automatic lid detection works currently is by setting a simple threshold temperature that if the Pit probe goes under it, just disable the output for a specific number of seconds or until the temperature returns to the setpoint. My normal procedure when opening the lid though is to activate it manually with the button before opening the lid (it won't auto-disable for the first 30 seconds of lid mode so it is safe it the temperature is already above setpoint) then open the lid and do my business.

It is almost always advisable to let the lid mode tick down to completion on its own after closing the lid. Turning off lid mode manually just after closing the lid returns to automatic control immediately while the temperature is still very low, which leads to the controller going 100% full speed ahead and creating a lot of overshoot on the recovery. Letting the timer expire on its own allows the majority of the recovery to happen on its own at 0% output before picking control up from a position much closer to the setpoint.

LidTrack is here to solve all those problems. Either that, or create something so complicated it fails to work properly ever! This new feature runs on the Raspberry Pi, in linkmeterd's Peak Detection plugin. It uses temperature peaks, trends, and recent history to make smarter choices about when the lid is opened and when control should be returned in a way that the AVR just can't fit (believe me, I wrote most of it there first before restarting from scratch).

To detect a lid open event, LidTrack watches the trend over the last 5-20 seconds and detects sharp drops in temperature. If the average temperature drop per update drops off by a mean more than 0.5F per second over at least 5 seconds following a period of lower variance, and is following a downward trend after a detected high peak. BOOM. Welcome to Lid Town.

"I dunno it sounds like pretty much the same thing, what's the advantage?"
Wow how are you still reading this wall of text? Let's see some example images.

Here's a graph with some triggers. Note that the width of the orange Lid Mode areas are different durations! Control resumes before the temperature even starts going down after the lid is closed. Now that's some well-coded logic. It even still works if you manually trigger Lid Mode like you're doing all the work, jumping in mid-lid to return control at the optimal time.

Works great at other temperatures too. 350F, 500F, 108C, or 260C (not shown). Notice the lack of a lid event during the 500F run where I closed off all the vents. The slow temperature drop meant that even passing the old 6% threshold didn't trigger anything and the controller was able to bring the temperature back up to setpoint. Well, until I screwed it by opening the lid, where it activated in just 5 seconds. Is that a Thermoworks Pro-Series probe at 560F? Eeee. Maybe?

I implemented this four times in different ways after some ideas I had proved to be too slow to activate, too slow to return control, generated too many false positives, or just didn't work right at all. It works with my regular thermocouple, it works with a slower-reacting thermistor. I think I've got it now though and all it cost was a bag of lump and everything smelling delicious for a week.

Look for this soon along with a couple other fixes and features in the next snapshot. Now is the time where you ask questions or make observations and show me how I wasted my time or overlooked something vital that's going to make this a nightmare for everyone else but me? I feel like this is the most advanced Automatic Lid Mode Detection scheme available today and you'll get it free because for some reason this stuff is fun for me.

EDIT: My friend who usually comes up with the best names for things has really let me down as she doesn't have a cooler better name for this than I came up with, so your suggestions for a better awesome name will also be considered. Wait. Lid Awesome? Lidlord? Marbel's The Incredible Lidulk? Hrm...

Holy s**t Brian. Nice piece of writing. You have come up with a great solution for the current lid detection algorithm. Any chance Turkey day usage will be available. My turkey is a calling.

Very cool, Bryan! My day job is working with data scientists, most who have PhDs in all sorts of fields.

Don't forget to properly brand this new feature with AI and ML buzzwords!

Just reading that made my head hurt. Had I tried to really understand it, my head would have exploded. Please keep that in mind.

Sounds pretty cool. Thanks for your continued innovation. Looking forward to trying it!

Gary V said:
Holy s**t Brian. Nice piece of writing. You have come up with a great solution for the current lid detection algorithm. Any chance Turkey day usage will be available. My turkey is a calling.
Click to expand...

I just pushed out a new snapshot with LidTrack built in. It is disabled by default and is still waiting on UI in the config page to enable it. I'm not going to finish the other changes I am making to the config page today, so I figure I will release it now for anyone wanting to try it. Since there's no way to turn it on in the webui, you'll need to go to System -> Startup -> Local Startup and add a line to turn it on. If you haven't added your own stuff to the startup script then just make it look like this:
EDIT: DO NOT USE THIS ANY MORE, CONFIGURATION IS DONE THROUGH THE CONFIG WEBUI PAGE

Code:
If you've added your own stuff to the startup script, I bet you'll be able to figure out what the important line here is IMPORTANT: You'll probably want to disable the existing lid tracking by setting "Activate at X% below setpoint." on the config page to 0, and extend the duration beyond the default, because LidTrack should now end Lid Mode early as it sees fit. I set mine to 600 seconds. Be sure to test it once before relying on it!

You'll see LidTrack messages in Status -> System Log, although it won't actually enable / disable Lid Mode unless you turn it on with the line above.
Last edited: Dec 18, 2020

Tom O. said:
Just reading that made my head hurt. Had I tried to really understand it, my head would have exploded. Please keep that in mind.
Click to expand...

You're right about that! The short version is the new automatic lid tracking code should:
The only important caveat is that the user has to let the Lid Mode end automatically, not override it by manually turning it off (by pressing the button on the device) when closing the lid.
I

So, what that says to me is:
Second derivative of the temperature curve over a certain negative threshold followed by a negative first derivative shuts it off.

Positive first derivative followed by a negative second derivative threshold turns it on.

Second derivative is concavity and first is slope for our non-calculus speaking friends.

Looks pretty solid to me man. Thanks for the hard work!

Actually it is closer to "Large positive deviation followed by a low positive first derivative threshold turns it on." The slope of the return is not considered, only that the value is much higher than the low peak. I don't track concavity due to the complexity of trying to curve fit a small number of points to what might not be a smooth curve with variable width (for lack of a better term) of the humps.

Ideally I'd be curve fitting it all and be able to detect inflection points and use them to make predictions about upcoming peaks but I didn't have much success with that.
A

This is an amazing enhancement Bryan. Really looking forward to trying it out!

Note that the latest snapshot includes being able to enabled/disable LidTrack so the option to force it on in System -> Startup should be removed for anyone using that.
M

Sounds great
I experience many of the limitations Brian discussed with current lid open program as well, so just do it manually 95% of time.
G

Brian, Here is yesterdays cook of some pork tenderloins. From the graph, the first lid open event occurred when I reached 225 , setpoint, and it looks like lid tracker kicked in and made corrections. I then waited for about 5 minutes for temp to stabilize and then opened lid and added the tenderloins. At this point I closed lid and walked away to let lid tracker do its thing. Came back and checked online to see how thing were progressing and when it looked like I reached my temp, I opened lid, rearranged the meat and closed lid. Last thing done was a increase to 250 for 5 minutes and then open grill up and pulled loins off grill. Is this how the lid tracker should work? 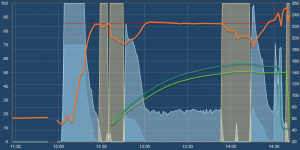