In your experience, whats the best charcoal to use that doesn't have any unappetizing ingredients and keeps a good burn going the longest?

Staff member
Now you've opened a can of worms...

To me, for the purposes of barbecuing, the only unappetizing ingredient is lighter fluid. You find this in charcoal like Kingsford MatchLight. It's fine for grilling if you allow all of the lighter fluid to burn-off and the charcoal to ash over, but even Kingsford does not recommend MatchLight for low & slow barbecuing like we do in the WSM.

Regular Kingsford Original has historically been very affordable when purchased during holiday sales (no so much in 2020) and has burned long and hot, but as the formula has changed over the years to include more wood char, both ash production and burn time have gone down.

I use Kingsford Original for almost all my barbecuing, but if I was to switch to another charcoal, it might be Weber Charcoal Briquettes. They are big and burn a long time, but are expensive and hard to find these days.

The current "charcoal du jour" is probably Jealous Devil Maxxx briquets or one of their lump products.

I wrote an article about charcoal for newbies. It explains why I use Kingsford and why I recommend K for newbies trying to follow the recipes I publish on The Virtual Weber Bullet website. Long story short: Start with a known product like Kingsford and once you have some experience under your belt, experiment with other briquettes and lump charcoals. 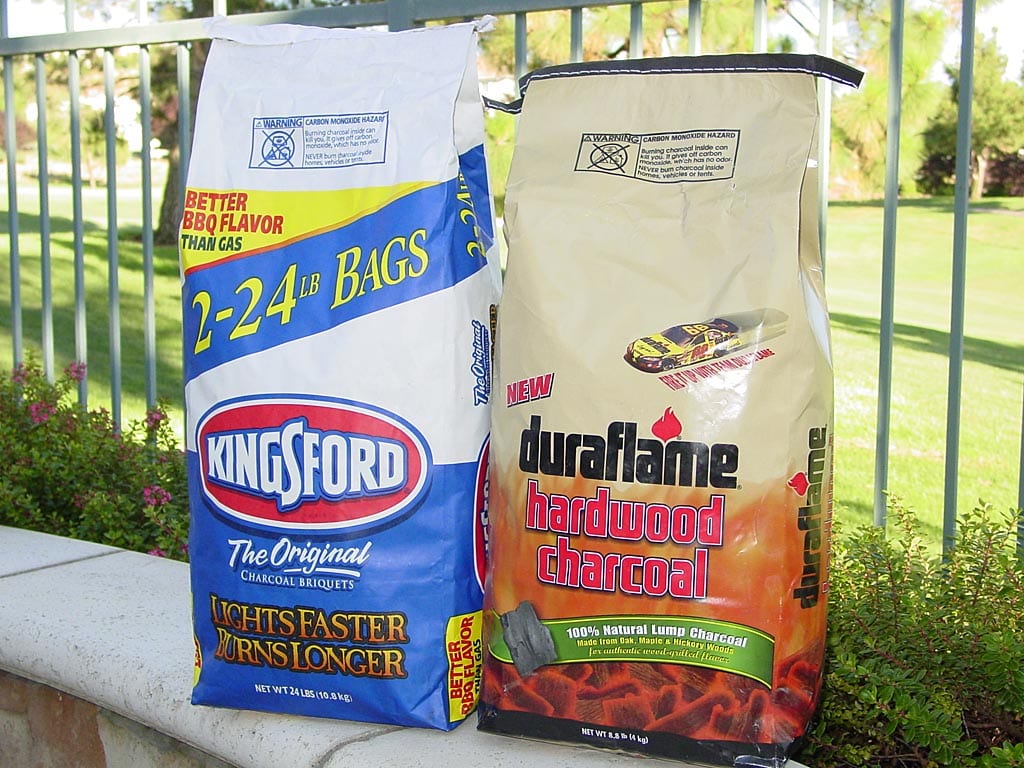 All About Charcoal - The Virtual Weber Bullet

Learn all about charcoal: what it is, types of charcoal, how it's made, and how to choose the right one for your Weber Smokey Mountain Cooker.

Chris Allingham said:
but if I was to switch to another charcoal, it might be Weber Charcoal Briquettes. They are big and burn a long time, but are expensive and hard to find these days.
Click to expand...

I use Weber. I was fortunate to be able to get 40 bags from Home Depot a couple of years ago for $4 each when they had a clearance. Yesterday, I was able to get my 18" WSM going for 12 hours on a full load of Weber charcoal (top of charcoal ring). I still had about 1/6 of the ring of charcoal left. Outside temp was in the low 70s. WSM was running around 250 for most of the day except for the last 4 hours when I had it at 325. Great product!
J

I switched to B&B briquettes from Kingsford. But I do use a little Kingsford to help light it.
L

If you're new to WSMs pick something generic and readily available. You will want to learn the smoker and how to use it with as few dynamic variables as you can. Use that for several cooks and once you have the method down pat, you can start branching out and experimenting. If you start changing your charcoal every cook on the first times out you'll end up chasing your tail on temperature maintenance. KBB (Kingsford Blue Bag) is a great starting point, you can find it just about anywhere it's fairly cheap and it's consistent. Is it the best? Eh... But it is consistently eh!

I use Kingsford Professional. It's available at costco at a decent price ~$20 for 36lbs. It lights easily, burns consistently and produces some ash. Is it the best or cheapest? No. But it's convenient for me to buy some when I'm making runs to costco.

I picked up some Cowboy Hickory Briquettes, because I ran out of Kingsford and that's all my grocery store seemed to have that day. Literally shelves of the stuff and no Kingsford Blue Bag or otherwise in sight. I have not been impressed with them so far. Incredibly difficult to light. I used 2 of the pressed wood fiber and wax fire starters which is usually plenty to light a whole chimney of kingsford pro briquettes. Walked back out to it 20min later expecting ashy white briquettes and found they weren't even smoking! Used another 4 fire starters on them and brought them closer to the flame and 20min later only half of the briquettes were lit.

Once lit, they did well in the smoker and burned pretty consistently. I couldn't really tell a difference in flavor. I suppose if you have a torch it would be ok, but I'm not going to use 10 fire starters to get charcoal to light...
R

Chris Allingham said:
Now you've opened a can of worms...

To me, for the purposes of barbecuing, the only unappetizing ingredient is lighter fluid. You find this in charcoal like Kingsford MatchLight. It's fine for grilling if you allow all of the lighter fluid to burn-off and the charcoal to ash over, but even Kingsford does not recommend MatchLight for low & slow barbecuing like we do in the WSM.
Click to expand...

i use Kingsford professional. Have for a long time.
J

KBB at 50 cents per pound every day at Lowes or HD (less if on sale).

Or Kingsford Pro when on sale at Costco.

For me, I use Kingsford for quick cooks (burgers, steaks, etc...) and Weber briquettes for low n slow.

I'm on board with Kingsford, Weber, and Royal Oak (red bag) briquettes. There are some luxury brands like Fogo that are pretty expensive that I wouldn't pay the extra money for.

For lump, I like Rockford and Royal Oak, and Big Green Egg. Lump burns quite a bit hotter, and lights a little faster, but the sizes are really inconsistent. I always break up the pieces that are over 4" across (the width of my hand), so that there aren't any big empty places in the chimney or the coal bed.

I use Kingsford or KBB as its called or Kingsford Pro from Costco. I've tried a lot of others, but availability and consistent quality is what I get with Kingsford so I stick with that.
D

For briquettes I use KBB original for grillling and KBB pro from costco when I'm smoking. I also really like B&B briquettes but they are not easy to as KBB.

BillSmith said:
I use Weber. I was fortunate to be able to get 40 bags from Home Depot a couple of years ago for $4 each when they had a clearance.
Click to expand...

just curios... where/how do you store 40 bags of briquettes?

In my shed. It probably occupies a4x4 area that is 4-5 ft high. I’m probably down to 34 at this point

Just came across this article today....

The best charcoal for grilling

If you have a charcoal grill, you need some great charcoal to get going. Here are the best charcoal briquettes and lump charcoal for grilling.

It was written this past July so it's up to date. What do you folks think?

My experience with Royal Oak briquettes has been quite the opposite of the article's findings. Last summer, I bought five bags from Lowe's when they were on sale for about $5.00/bag. I had seen a number of positive reviews of their product on several forums, so I thought, "Why not?" Instant regret. From the first lighting of it in my Weber chimney, I noticed that the smoke looked dirtier, and had a harsh chemical smell. When I dumped it into the charcoal baskets, the wind shifted and some smoke got in my eyes. It was a quicker and harsher burning sensation than with the KBB I had been previously using. The taste of the food cooked with it was also odd, and had an unpleasant taste. It also seemed to create quite a bit more ash that interfered with air flow in the charcoal baskets, so I had to stir the coals and shake the baskets more than normal to avoid temperature drops.

I'm kinda cheap, and I don't like wasting things. (Except for time; I'm really good at wasting time.) So, I kept cooking with the remaining bags, in the hopes that things might improve. Nope. Still burned my eyes more. Still taunted my bad decision every time I stepped into the backyard during a cook with the weird chemical smell. Still imparted an "off" taste to the food. Still ended up with a lot of ash. On the plus side, I probably did grill a little more often in my attempt to burn through all of it.

Would I use it again? Not even if it were free.

However, in watching Malcom Reeeeeddd on YouTube, I noticed that he frequently uses Royal Oak lump charcoal. I saw a bag in a store at a relatively low price, so I bought one. One; just one bag. Turns out, I liked the experience with it. I did have a lot of small pieces that readily fell through the charcoal basket slots and grates. -Maybe it's like a bag of chips with a bunch of broken bits. I'm willing to try it again, along with other lump products. I've also heard about other lines within the Royal Oak briquette family. I haven't seen them so I can't comment.

Ro briquettes and lump vary state to state ( and I don't know why) so I guess some have bad experiences.
Me, Ro has always been a reliable fuel, even the Embers brand that HD carries...
J

For briquettes, I agree with this guy's test.

RO and Embers distant 3 and 4.

Since it is easily available, I go KBB or KPro if on sale.
M

For briquettes, I agree with this guy's test.

RO and Embers distant 3 and 4.

Since it is easily available, I go KBB or KPro if on sale.
Click to expand...