I cook tri-tip every other week it seems, and I've been experimenting, and trying to get more smoke flavor into the TT.

I like it med rare, so it is a fairly short cook, and I rarely get enough smoke flavor.

I've tried smoking on the pellet, on the BGE, the Pellet with smoke tubes and tonight on the BGE with two smoke tubes filled with mesquite pellets.

To be candid, it is the first time I've had too much smoke on the meat, so I must be on to something.

My older son thought it was a nice change. My younger son said it was good, but maybe too smoky. I personally thought it was over smoked, but not that bad as I had seconds.


Details:
started cowboy lump ( oak and hickory blend) in a chimney, got things going, and let the temp stabilize around around 200F grate / 220 dome temp.
started two smoker tubes with mesquite pellets, and let them get burning for about 5 mins.

I put both tubes directly on the coals, and let the temp stabilize at 220F at the grate according to my TW-smoke.

I let it go for about 10 mins and watched the smoke. It thinned, but was more smoke than normal for just the BGE at 220F.

Added the meat, put in the meater probe, and a TW meat probe. ( more on the meater later )

Went out front and threw a football for a bit with one of my kids.

After football, and temps were down to about 200 grate, 225 dome, and a nice amount of smoke was visible. Maybe not as thin as before, but not thick smoke. I was not using my billows or any ATC and it was within temp alarm range of 190F to 250F

Let the tri tip cook until 125 internal, then pulled off, wrapped and it sat for about an hour. ( dinner was later for other reason)

Before dinner, I dumped the mesquite pellets on the coals, opened up vents and let it get hot for a reverse sear.

It was tasty, med rare and smoky. I think next time I'll only do one pellet tube, and I might try hickory instead of mesquite.

I didn't take many pics. I'll add a few in a minute. 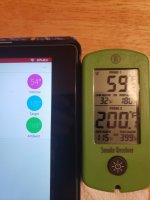 This was just before it went on for the reverse sear. 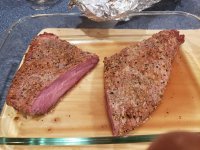 It could be the mesquite, it can be a bit strong. I did a TT yesterday, smoked it on the kettle using cherry wood, then seared.

EricV. said:
It could be the mesquite, it can be a bit strong. I did a TT yesterday, smoked it on the kettle using cherry wood, then seared.
Click to expand...

I've not used cherry with beef before except in a blend.

I highly recommend cherry with beef products, its about the only type I use with beef.

It's cooked perfectly from center to edge.

Mequite can be really strong. You could try mixing it with something else like oak.

ChuckO said:
It's cooked perfectly from center to edge.
Click to expand...

What Chuck said.
I concur with everyone else on the Mesquite. I had the same experience and do not use it anymore.

I've cooked with mesquite lump in the BGE and mesquite pellets in the pit boss and did not get enough smoke flavor.

I think the combination of two smoke tubes in the BGE combined with mesquite pushed it over the line.

I'll have to pickup some cherry pellets next time I see them. I have Hickory ( a blend ) and Maple pellets.

Anyway, I think the "extra smoky" might go well in tacos or fajitas or maybe some nachos, and its almost lunch time...
Last edited: Monday at 11:29 AM

Last night i didn't take any pics plated, but here are the leftovers. And my quick and easy nachos for lunch 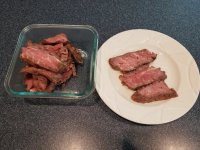 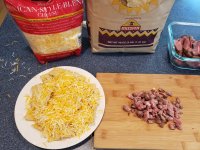 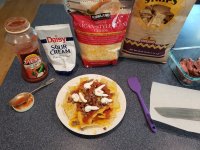 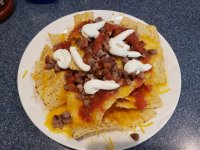 As many have stated, the issue is likely the Mesquite, which can give food that "I just survived a house fire" taste. Your method might be strong just the wrong species. Since you're making tri-tip twice a month, you have plenty of opportunities to experiment with different pellets. My favorite on medium-rare beef (and everything else) is pecan.

DanHoo,
Funny I ran across this thread now. Saturday, I shot clays with a friend. He said his neighbor had just asked him about the tri-tip I brought to my friend's 60th birthday backyard party. That was 4 years ago. LOL. His neighbor said he couldn't stop thinking about it. LOL, he must have thought about it a lot in 4 years.

I do mine similar to you, on my Bubba Keg. I build a little lump coal fire and use chunk mesquite instead of pellets. But I front sear with a charcoal basket setting on the diffuser rack, right up next to the food grate. I build a super hot fire in it, then sear the meat in a few minutes, then put it in the freezer while I rearrange the keg into a low/slow configuration with a little handful of lump and a big chunk of mesquite. I can usually get a couple hours of smoke at the low 200s before the internal reaches 130ish. I slice it and put it one layer deep in a tray and make an au jus from broth, rub and some other things, then pour it over the meat. It post cook marinades it and moves the smoke deep into the meat.

I have catered many parties with this method for going on a dozen years. I haven't heard any comments about it being too smokey. But I do make sure the smoke is light and not sooty. As you can see, it does get a smoke ring, but never has a bitter ashtray taste. Personally, I love the taste of mesquite on steaks and tri-tip. But it has to be used moderately. For me and my friends, I think I've struck a balance. It's always all gone when I cater and I get positive compliments. 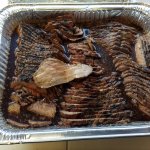 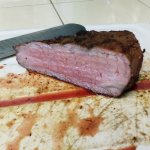 I have a small slicer, so when I have leftovers of TT I like to thinly slice it. I put it on a baguette with cheese, wrap it in aluminum foil & bake in the oven.

DanHoo said:
I've not used cherry with beef before except in a blend.

I use pecan with apple or cherry mixed in for most beef. Gives it a more mellow smoke flavor than mesquite or post oak.