Thanks for finding those, Ed👍.

Those markings are so faint that a cup brush or even sandblasting can obscure them. It really doesn't matter if they are missing or unreadable, of course, but if they are there it doesn't hurt to take a picture of them before doing anything else.

I did some more searching, and member Joel Young in AZ is the guy with the great talent at replicating labels. Checkout his work here:

I think if you reached out to him he might be able to help you make perfect ones for your gauge and maybe share with the rest of us who are hoping to restore a very original Genesis.

Joel Young hasn't been logged in to this forum since Jan 30, 2021. I think that he went dormant.

Well, I had the same idea of doing the 303 stainless frame sitting out back eating brisket, somehow I missed this whole thread! Where has my head been? I thought it was a new idea! (Hanging head in shame).

I didn’t think we heard from him in a while. It was very generous of him to offer his graphics files for free to members here. I used his to make the vinyl type peel and stick decals I offer in addition to some new ones that I made.
G

I’m surprised to see my restoration thread resurrected.
Well, after four years use I can report that the stainless frames are in perfect shape. I think I may sand and refinish the wood for aesthetic reasons (maybe) but other than that, everything is in good shape.
Since the restoration, I have converted them to nat gas. That helps with things like the 22 hour pork shoulder that I just smoked.
Cheers!
Gerry

Edit to add: Those grills were never covered except for the roof over the deck. 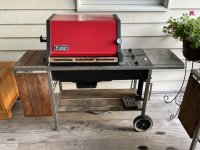 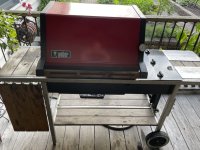 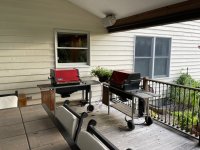 22hr cook for a pork shoulder? Wow. I did not know they could take that long.

That’s REALLY low and slow! It can do wonders, I understand. 14 hours was my longest cook using charcoal on a Big Green Egg.
G

Bruce said:
22hr cook for a pork shoulder? Wow. I did not know they could take that long.
Click to expand...

I put it on at 4:00pm yesterday afternoon and set the temp at 225. Front burner on med, rest of the corners off. A 19x12x3 aluminum disposable pan filled to the top (1.5 gal?) with water as hot as I could get out of the faucet was on the lower level of flavorizer bars. Makes a great heat stabilizer. The upper bars were removed. Overnight the grill temp dropped to 217 as I slept and it got colder outside. At 5:00 am I dialed up the temp and it hovered around 235 until about 2:00 pm. At that time the internal temp was 183 and it was at that temp for a couple of hours. My friend who smokes a lot of meat was over and after probing and slipping the bone out, declared it done. After resting an hour wrapped in foil and towels in a cooler, it was pulled and taste tested. It was deemed a success!

Now, why did it take so long?
When I inserting the probe into the pork before cooking, it registered 34 degrees. Obviously I should have let it thaw in the fridge a bit longer.

When I was done cooking, the water pan was still half full of water. On previous cooks, the pan would be almost empty.
The meat was placed at the rear of the grill and the grill temp probe was just in front of the meat. I think next time I will move the meat a bit forward and put the grill temp probe behind the meat. I’m thinking that with the cooler ambient temp, maybe the meat was only getting the 225 degrees on the front face and the rest was much lower.

Gerry, did you consider a rotisserie for that bad boy?
G

Bruce said:
Gerry, did you consider a rotisserie for that bad boy?
Click to expand...

Asked and answered
Post 32 and 33. (Sucks getting middle aged…)🤓
I have rotisseries for both.
G

Timothy F. Lewis said:
Well, I had the same idea of doing the 303 stainless frame sitting out back eating brisket, somehow I missed this whole thread! Where has my head been? I thought it was a new idea! (Hanging head in shame).
Click to expand...

It would be nice if someone could make money building stainless frames for the older Weber grills.
Unfortunately; well, not going to happen.

G Schafer said:
Asked and answered
Post 32 and 33. (Sucks getting middle aged…)🤓
I have rotisseries for both.
Click to expand...

I was alluding to using the roto on that pork roast. It would solve the varied temp zones problem.
G

Bruce said:
I was alluding to using the roto on that pork roast. It would solve the varied temp zones problem.
Click to expand...

Oh, I see.
I never considered using the rotisserie for a pork shoulder. I always thought that the pork would fall off the rotisserie as it got tender.