Oh no, not another holiday roast thread!

We hosted a small dinner party between Christmas and New Years. I was our third event in four nights. I think I finally recovered, so here is the roast beast dinner. Things got very hectic as the day went on, so I did not take as many pics as I had planned. We had two rib roasts in the freezer, one bone in and the other boneless. Neither seemed to be large enough for six people and leftovers so I cooked them both on the WSM. I have used the Cooks Illustrated/Am.Test Kitchen method of low and slow in the oven with great success, so I adapted that technique to the WSM along with Purviance's herb paste.

The Roasts, having sat in the fridge for 48 hours after rubbing with kosher salt. Purviance's herb paste (with no salt) is in the bowl. 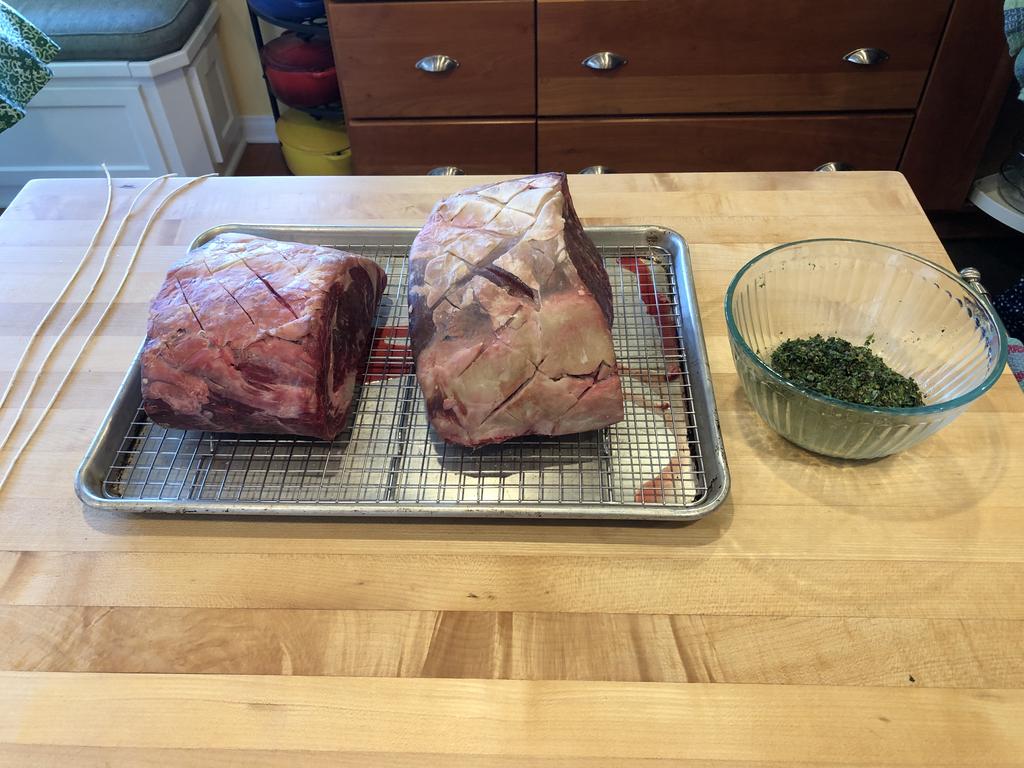 Rubbed and on the WSM at 175. I had planned on the whole cook at 175, but I had to increase the temp to 225 to get it done in a somewhat timely manner. 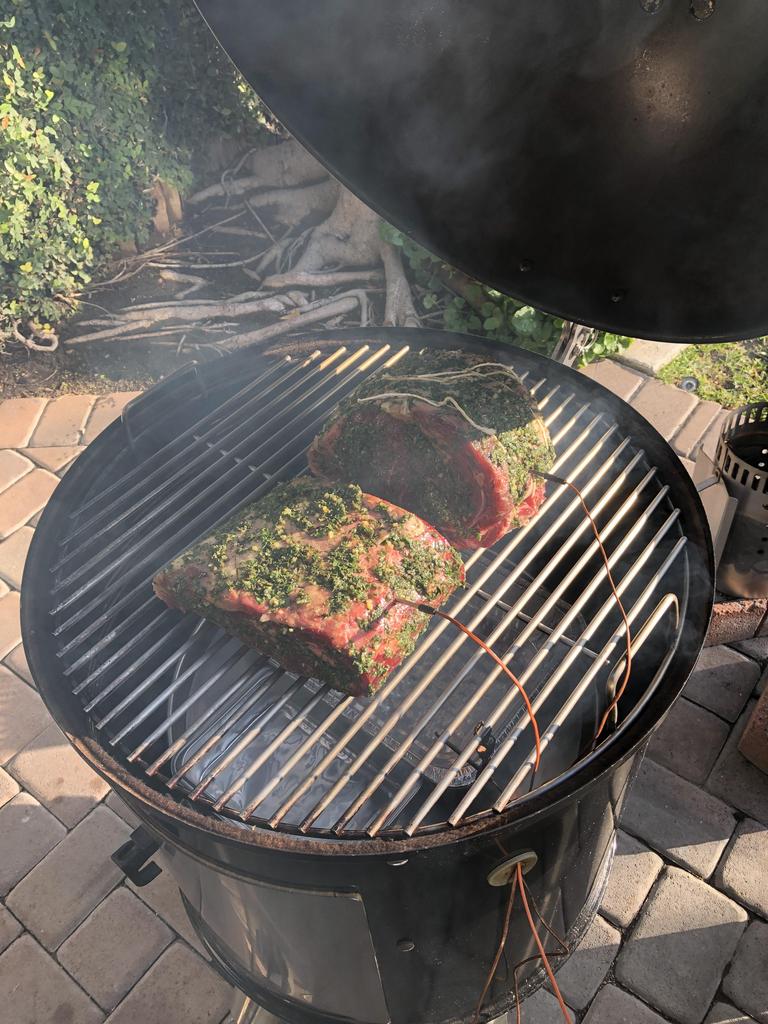 We made some dinner rolls in the CI from a recipe from Southern Cast Iron Cooking. There's a bunch of finely chopped fresh herbs in the dough. There was a ninth roll in the middle, but we thought we better sample it to make sure it was good enough for company! 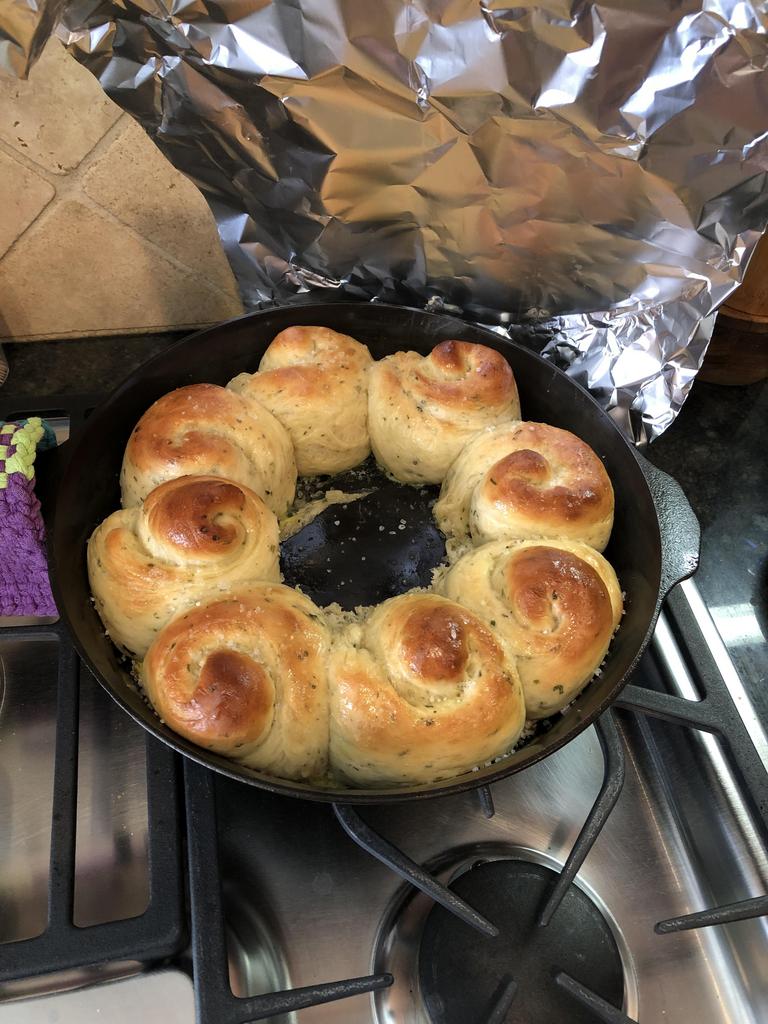 The table is ready for company. 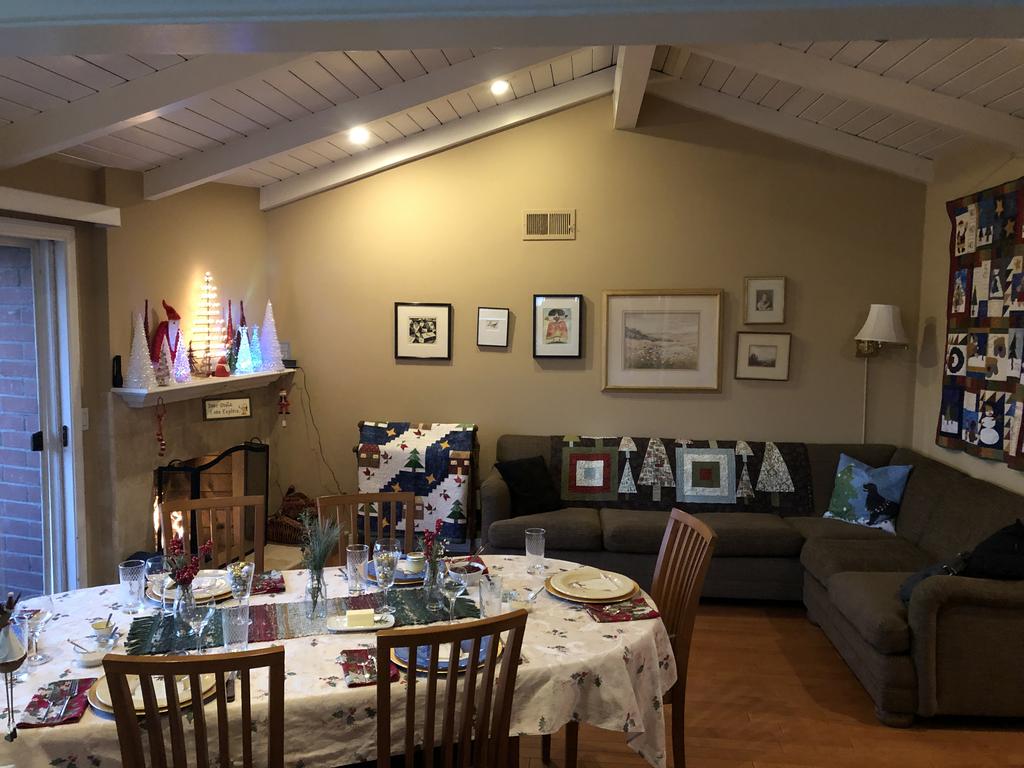 Here is where I fell down on the job. No pictures of the roasts coming off the WSM or resting. I remembered just as I put the platter on the table! 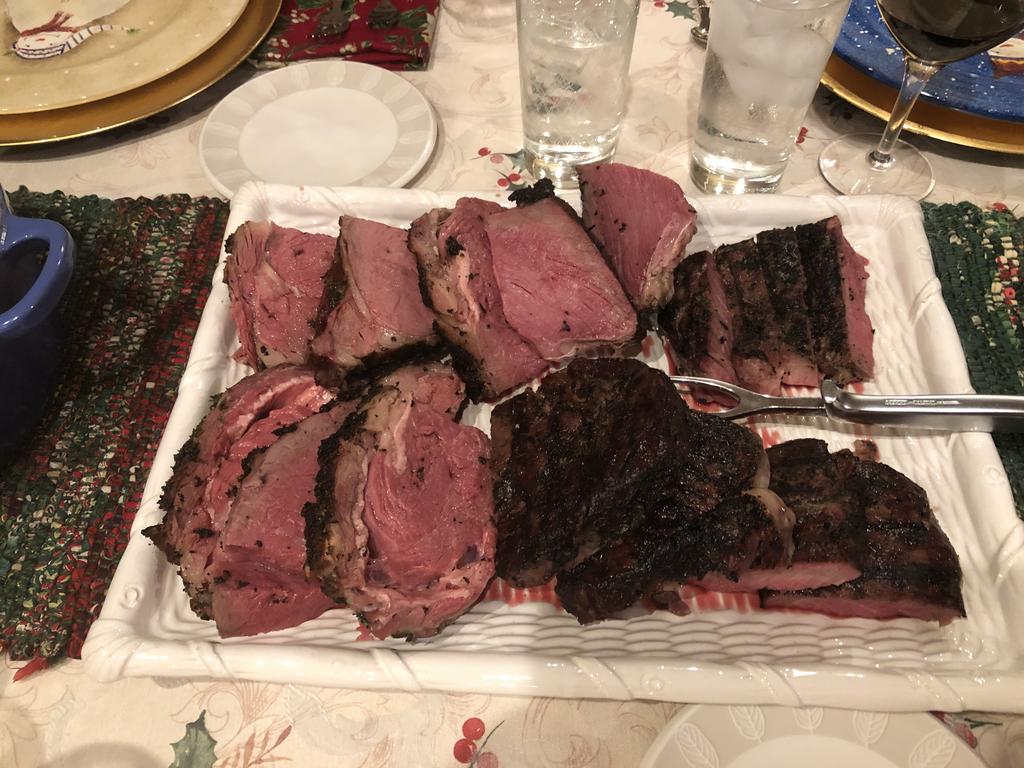 Here is the whole spread including Instant Pot mushroom risotto (transfered to a dutch oven for serving) and grilled asparagus. 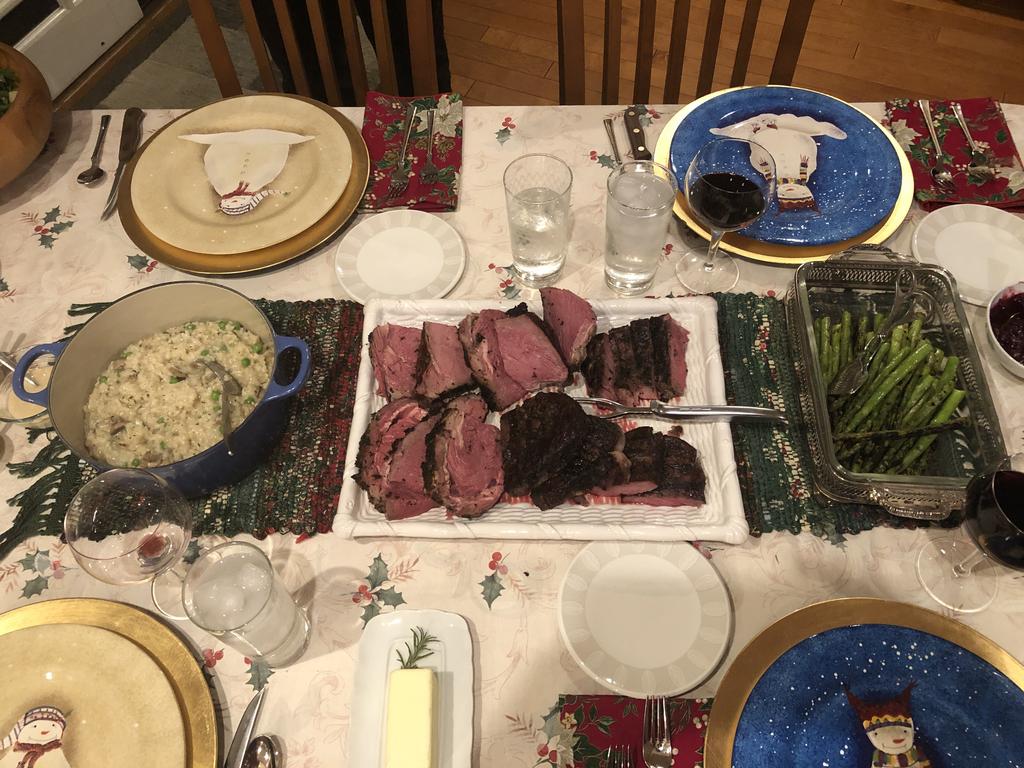 Fortunately, everyone attending the party enjoyed their meat on the rare side of medium rare, though my DW would have preferred it to be cooked more. I should have put it on an hour earlier than I did. I used lump charcoal and 2 pieces of post oak. It had a wonderfully smokey flavor to it. One of the guests, who is a fabulous cook, asked how she could get that smokiness from her Traeger. I didn't think she could, but suggested extended cooking at a low temp to maximize the amount of smoke produced.

So what to do with left overs? Sliced thin for roast beef sandwiches! 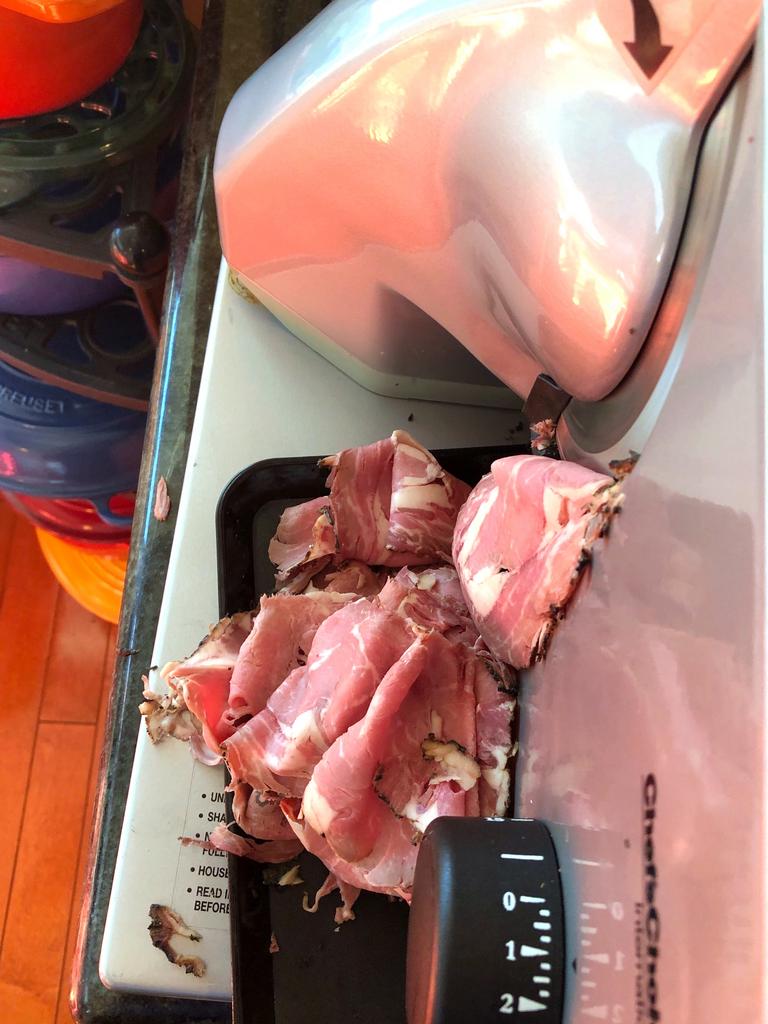 Looks fabulous J. I never tire of Rib Roast cooks, especially around the holidays. Like the cast iron dinner rolls too. Is your wife a quilter by chance?

Thank you for the kind comments everyone! Cliff, my wife quilted for many years. One day, she decided that we had too many quilts and all of our family had too many of her quilts as well. So she quit quilting and took up weaving. She wove the table runner under the platter of food out of strips of fabric. Her oft repeated motto is "Makers gotta make!" I'm lucky, I get to live in a veritable fibre arts museum!

J Grotz said:
Cliff, my wife quilted for many years.
Click to expand...

That's what I thought after seeing the lovely collection in your photo. My wife is a quilter also and is experiencing the dilemma of displaying, gifting and storing the growing herd. She has branched out into machine embroidery. I bought her an Ellisimo II a few years back and she bounces back and forth between quilting and embroidery now.

Now i have to figure out what I want for lunch, a nice roast beef sandwich would be great!

Great-looking roasts! Did you notice if your guests had a definite preference one way or the other for bone-in vs. boneless?
K

Those are really good looking roasts, I am curious how you got such a good looking crust at such low temps? How long were they on there?

I cook mine at 225, but always crisp them for 8 minutes or so in a 550F oven after they have rested.