I will just leave this here

That was a GREAT deal on that ivory.
S

Bruce said:
I thought maybe it would be nice to have a thread of mishmash stuff related in some way to Weber gas grills, but not worthy of a dedicated thread. Feel free to post things that you think are interesting and might be of interest to others on the forum.
Click to expand...

Here's one, has to do with the 'big weber' at the kids' mom's house, which we got for her b/day 8/19 and resulted in me getting the q1200. The other day, she had grilled some chicken, we were having a glass of wine on the front porch watching the dogs and she said "i've got to scrape the grill, I've had it on high for ten..." I said "stay with the dogs, I'll scrape it."
Went out on the back patio, the grill was smoking like crazy. I thought she probably left a chicken breast on it, opened it, and there was just flames from the basement of hell. Dropped lid, turned of gas, waited a respectable interval.
Turns out it was the drip pan (which came with the aluminum Weber OEM insert) that was flaming up!
As other posts have noted, the aluminum inserts leak or fatigue or whatever, and this one had. It was half full of gunk, and underneath the insert the drip pan still had a lot of really low-viscosity oil. So it was kind of a stereo can! I showed her how to pull the pan and put in a new insert, and she said: "well, I kind of count on you to do that kind of thing." I said I'd bear that in mind for the future.
A good divorce is better than a bad marriage and the kids' mom and I have a good divorce!

LOL. I don't think your experience is completely unique.

Those were really well built grills. All 304SS and built like tanks. That poor grill looks like it's been run hard and put away wet. The very fact the ad states it could be used as a charcoal grill would indicate the disdain the owner has for it

I see these for sale with prices from $50 to $500. Don't think they have any flip potential, but if you like the design and put the necessary $ into it for parts I am sure it would be a very decent grill. The ones I have looked at have very nice stainless rod grates.

Ducane was once a very good name, but Weber used it up to experiment with outsourcing to China while not risking the Weber reputation. Too bad the project led them to conclude outsourcing was the way to go .

I sold the red Spirit II tonight.
Nothing note worthy there, other than
the fact that they drove away with it loaded
in a 4dr Honda Accord. Still kicking myself
for not taking pics.

Hey guys. I found out about a cool way to do a reverse sear. I had a 2lb London Broil and cooked it indirect on my Genesis 1000 with just the rear burner on. It only took about 15 minutes. I planed on taking it off at about 120 degrees internal temp, but with trying to coordinate my grilled Asparagus, I got it off about 3 or 4 minutes later than I would have liked. I then threw it on my Q200 because that is where I had just finished the Asparagus and where I had the spare propane tank. Then, I lit my Harbor Freight Propane Blow Torch and went after it. It came out with a nice uniform blackend crust. The meat wound up being a perfect Medium, but it was still a great eat. That seared crust gives it a whole new flavor.

Last edited by a moderator: Sunday at 2:49 AM

Dave in KC said:
Still kicking myself for not taking pics.
Click to expand...

He is another crazy one, and this time I did snap a pic. 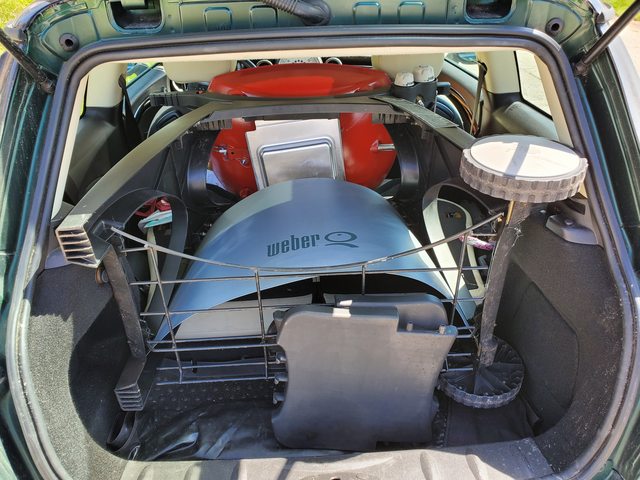 That would be a Q300 in the back of a Mini Cooper that a gal bought yesterday.