Got my Vieluxe, now what??

Loc said:
Bill, if you need to shoot amovie with a Vieluxe, I can play this guy:
View attachment 44219

Although, unlike this guy, I can’t have my back to the grill; or ignore it so I can listen to whatever jibber jabber his teenage daughter is saying.

Lol, in one scene they had me grilling sweetbreads, it was like trying to grill jello.
R

I'm calling BS on that ad. Doesn't he seem a bit overdressed for a casual evening on the back deck? And that Vieluxe looks right out of the box (did these things come in cardboard or gossamer silk?). They're portraying a guy with a valet and a full staff of house slaves.

My uncle tells a story of getting upgraded at no cost to the top suite in first class on the QE2. He and his wife had a maid and a butler. I asked, "What does one do with a butler?" His response was, "I don't know. Didn't need him to bring juice in the morning, help us dress or brush off our clothing. We drank with the guy while he told stories about the aristocrats he usually worked with."

Looks to me like the Vieluxe has the stainless front and back that we all so wish the 1st generation Summit had. Very similar in shape and how it sits on those round tube frames. I wish I had more and better pictures, but you can see a little what I mean: 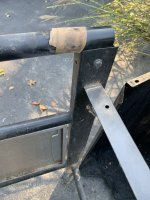 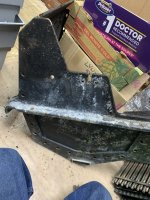 Jon Tofte said:
Looks to me like the Vieluxe has the stainless front and back that we all so wish the 1st generation Summit had. Very similar in shape and how it sits on those round tube frames. I wish I had more and better pictures, but you can see a little what I mean:

How does the shelf that holds grates/flavo bars attach to the gen 1 Summit cookbox?

I thought the frame was stainless steel as well.

Bill, I do think it is. I think the confusion comes with the talk about Summit grills. Some of those photos above are of a Summit grill.

Got it, lol. My second generation Summit Platinum has a stainless frame, perhaps Jon’s is a gold. It does have a much better cookbox though.

No, mine is a first generation Summit. No stainless version but built to a high standard and like a tank - except for the porcelain plated steel front and back of the firebox.

Jon Tofte said:
No, mine is a first generation Summit. No stainless version but built to a high standard and like a tank - except for the porcelain plated steel front and back of the firebox.
Click to expand...

Ok, so you suffer from the same ills as me as far as the cookbox is concerned. It’s really a shame or these things would outlast us. And then there’s the Flavorizer bars..

Yes, although the 1st generation Summit uses regular shaped flavorizer bars. The ones in yours were an improvement to protect the crossover tubes. I am sure that it helps do that. They just didn’t worry about the cost to replace.

I am discovering the Vieluxe has an Achilles Heel too. I am not sure how the Summit grate rails are mounted, in the Vieluxe, they are welded to the firebox. Two rails, 8 welds a piece for 16 total.

Fifty percent have failed, mostly the welds on the ends. The rails are bowed downwards and coming loose on both ends. 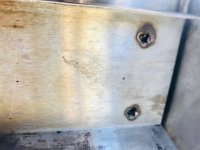 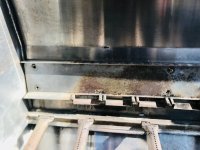 I will have to doublecheck the pile of parts all over my little shop, but I am pretty sure on the Summit they are held in with bolts. Maybe with some high-quality drill bits you can do that with this Vieluxe.

Loc,
This is all so interesting. You are giving us a great education on this grill which has been shrouded in mystery for most members here, self included.

Yah, I would still love to get my hands on one.....probably more so now than before.

I was just thinking that it would be great for Weber to take the Vieluxe, now that it has been put through it's paces in real world situations, and make the minor changes needed to solve those problems. Then restart production of basically the same grill. It just seems the grill is virtually bullet proof as is and maybe some minor changes could really make it a lifetime grill. Most of the R&D is done and I am sure Weber still has most of the machinery and setups used to make the originals. I would think that unless the steel availability is not a problem, they could make them for the same if not a lower price than the originals were sold as. They could maybe bolster the flavorizer bars and burners to make them longer lasting. Maybe have a really competitive re-entry into the very high end grill market.

Either that or make a fully SS version of the Summit with a stainless cook box....a poor man's vieluxe. I should charge Weber with such great ideas.

Nothing lasts forever, and even if it did, imagine a stainless steel horse-drawn carriage...what would you do with it?

Rehab it. Collect them.

They might have stopped producing them because they never sold a second one to the same person!

Plus, honestly, who here would actually shell out the mucho dinero they would go for new?

At best, in five years we might start grabbing some from Craigslist ha ha!

I'm talking mostly to myself of course. Maybe Bruce too lol

I think, from what I read, that it came down to the fact that there was only a small market for a hand-made all stainless $6-8,000 grill. And,d despite the high selling price, the high labor costs made it something less than a home run. Meanwhile, they could stamp out Summit Platinums for a fraction of the cost - on existing assembly lines - and sell them much more easily. There just wasn't enough sales and profit to justify such a lofty flagship. A shame, but that makes the small number of Vieluxes still out there an even greater treasure.

It would have been nice if they had just taken the Summit Platinum up one notch higher with stainless, not porcelain plated steel in that firebox. If they had, I think we would look at the 2nd generation Summit Platinum with a lot higher regard - even if it lacks some of the rugged design on the 1st generation Summit.
You must log in or register to reply here.
Share:
Facebook Twitter Reddit Pinterest Tumblr WhatsApp Email Share Link
Top