Got my Vieluxe, now what??

BPratt said:
Major mods to a Vieluxe would diminish the value. You may want to sell it someday
Click to expand...

This grill will likely be included in my will.
B

I would not open cart it either. I actually prefer N/S but I don't do Rotis, my Silver C is the first grill I can remember that was E/W don't think you will have any problem getting used to it, plenty of real estate also can't even imagine how much propane that beast is going to use.

That settles it. I will opencart it…. temporarily and store the doors and back panel like @Jon Tofte suggested while I work on the rest of the grill. Any weight reduction during the rehab is gladly welcomed.

The back and other panels are secured with with 4 bolts each that were easily accessible once I crawled up inside underneath.

I will have to replace all the panels’ bolts/lock washers. Weber spared no expense with the panels themselves and external bolts, but perhaps could have upgraded the internal bolts. 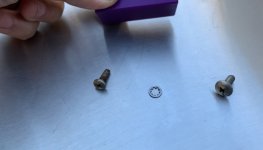 They may be stainless. Many type of stainless steel are magnetic. It just isn't the preferred 304 stainless. If they haven't rusted by now, they probably will not in the future.

Here’s what some of them look like, they feel mushy when unscrewing, not dense/solid like the external bolts (don’t know if I’m explaining it sensibly): 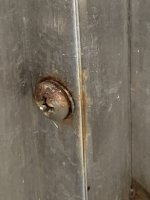 I had a Charbroil that was badged as a Frontgate before my conversion to the church of Weber. The Charbroil sat uncovered for 12 years in my neighbor’s yard before I bought it. Only rust was from the bolts, left rust streaks I couldn’t scrub clean from the panels.

I think the cost to replace the internal bolts is small, but gives me great peace of mind that I won’t be uncovering brown skidmarks in the future. We all know how mortifying that experience is, theoretically speaking heh heh

Loc, I completely agree. If there is any possibility they might not hold up, it is easy and inexpensive to change them out. On a grill like that, the last thing you want is a rust issue due to a simple screw or nut or bolt.
B

Loc I agree with Bruce change them all out if you go to Bolt Depot or have a Fastenal store near you these things are cheap for new Stainless you can special order only what you need at Fastenal so its not like you need to order a bag of 50 I have done this before. Take all the bolts washers and whatever bring them to the Fastenal store they will ensure your getting the right sizes. Ain't my grill but please do not open cart that thing you have a part of history.

in all seriousness, I would not opencart a machine like this. Rest assured goodfellas.

While I’m waiting for new caster wheels, I’m getting acquainted with the Vieluxe. It is different from my Genesis Platinum, strange new parts. The Summit owners out there might recognize these parts. Here’s a quick video:

Very cool Loc. I've never seen one close up before. It is a little different, but nothing you can't handle I think.

Yah, nice to see a guided tour of the Vieluxe. I can see how one would be a rehabbers nightmare. Cleaning it up is one thing, but repairs and replacements of parts would be very difficult.

Was that a 5lb LP tank on the tank hanger. ... That would last for maybe one cook if you were lucky.

Thanks for posting that video, Loc. Few of us ever have the opportunity to really look at how a Vieluxe was made. Do you have the grate and deflectors for the side burner and some of the other things that weren't in you video such as grease drainage tray? I very much hope so. It will be almost impossible to find original Vieluxe parts like those. You might be driven to some fabrication in you efforts to restore this awesome grill. Hopefully, some of the members here who are good with metal work can be of some help with that. We all want you to succeed in bringing this back to its original glory!

Hi Jon, the grill came with almost everything except rotis motor/skewer. A few bolts/nuts were missing here and there, but in general a 8 or 9 out of 10. I’ve dragged home some ugly 2’s and 3’s that should have been landfilled.

I’ve uncovered more unusual parts during the teardown over the weekend. I’ll make another video later, a part II of “Vieluxe parts unknown”.

In the meantime, structural integrity and rust abatement is the first priority. Luckily, this grill is so well crafted that not many components have failed (except for grate shelf welds which I’ll revisit later).

Here’s my bolt/screw list, hope to run out to Fastenal store over lunch: 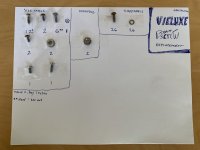 What would you use to lube the sideburner shelf sliders: 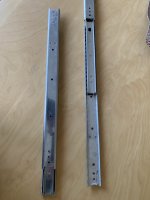 I would probably go with Lithium grease, but I would be interested in what @LMichaels @Bruce and others think. I personally wouldn't use WD-40 for this application.

Lithium grease is a great all around grease and should work very well on the drawer slides. It is great for displacing moisture and also is resistant to high heat which can be key on a grill. You could use a spray lube, but it won't last and you will need to continuously reapply it. Lube is a much better choice for your application and white lithium grease would be perfect.

Interesting find Loc! What will your first Vieluxe cook be?

Yep, a little dab of plain old white lithium is great all purpose product. For grate and flavorizer bar shelves (brackets) if you find an old first generation Summit for cheap many parts swap between the 2

Bob H. said:
Interesting find Loc! What will your first Vieluxe cook be?
Click to expand...

I hadn’t dared to think that far ahead. That decision is very distant from where I am, which is a pile of shrapnel belonging to something once magical. I hope my yard is not where unicorns come to die. 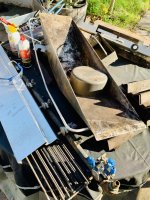