I've used my Weber Genesis grill for several years with no problem. Other than cleaning the grill's internals once a year, it has required no other maintenance until this year, when my flavorizer bars finally rusted through. After researching, I decided to replace them with stainless steel bars so that hopefully I would never have to replace them again. My research suggested that Weber's own stainless flavorizer bars (which are pretty expensive) are probably one of the cheaper grades of stainless steel since they don't boast about them being grade 304 or 316, which would make them less corrosion resistant than 304 or 316. So I opted for a much less expensive set from amazon that claims to be grade 304 (and since a magnet doesn't stick to them, perhaps they really are 304). They are pretty solid, thick, and don't seem cheaply made.

After giving them a while to burn in at maximum heat, I let the grill cool & cleaned the grates again. But when I cook with these stainless bars, my meat gets a strange hazy grey-black discoloration that it never had before! I've cooked on it several times now, and when cooking chicken, you can really see the lines. The grey-black lines on this chicken are NOT grill lines from the hot grates; the grey-black lines are from the spaces between the grates! What the heck could be causing that? And is it safe to eat?!? 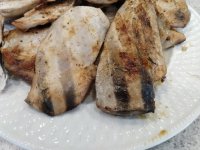 It really is not from the flavo bars unless they're really not actual stainless steel but some type of zinc or zinc coated metal.

LMichaels said:
It really is not from the flavo bars unless they're really not actual stainless steel but some type of zinc or zinc coated metal.
Click to expand...

The only thing normally coated with zinc would be carbon steel, and the magnet rules that out. A zinc alloy, such as Zamak, has a melting point right around 700 degF — they'd melt almost instantly when placed directly over the burner.

I'm thinking there's something on the flavorizers that didn't get burnt off. I'd suggest washing them (use a Brillo-type pad and scrub them inside and out), rinsing thoroughly, then doing another high-heat burn. If that doesn't solve the problem, there's something else going on.

Did you replace any other parts? DId you do any other cleaning to the grill at the same time as you changed out the flavorizer bars?

Probably not a health risk, but definitely not appetizing. I agree with above. Clean them up good with some kind of abrasive and put them back in. Can you post a link to the ones that you purchased.

Looks like soot was on your grate. Wiping them with vegetable oil should remove the soot
R

The fact that the gray/ black is not where the grates are leads me to think that maybe you're getting some soot from the burners? I had similar marks when I was playing around with the shutter adjustment on my grill after cleaning the burners.
T

I am hoping it is soot from burners. Makes sense. But I am concerned that it is a metal off gassing. Do not eat until this is fixed. Change bars. That will prove it unless the sizes were different and that caused the burners to not work properly.

Thank you all for your ideas, I am really hoping it is soot too. I've never cleaned the burners or the gas orifices or spider screens; I've never had a gas grill last long enough to have to clean those things. (Normally my cheap no-name grills fall apart in only 3 years, but my Weber Genesis has lasted much longer!) Unfortunately it's rainy now and will be for several days, so I won't be able to test this hypothesis for maybe a week or so.

Give them a good scrubbing with Barkeepers friend and then rinse several times. If that doesn't get rid of the problem, it isn't coming from the grates.

Skip the BKF. It will not clean those parts well if at all. (Heck I can't even get it to clean my Wolf). I would simply get after them with some good hot soapy water. Dawn or similar. Brush the burners clean and make sure all the holes are clean as well, check for lint and dust in the spider screens too. Use a good stiff wire brush on the burners. I keep a good stainless steel grate brush for that but I don't use it on grates. Only burners.

BKF will not only clean stainless steel if used properly, it will also repassivate it.
T

First check how the burners are burning
At night or in shade. See if they are burning correctly. That will answer several problems.
If they are okay.... if they are not answers why the cook issue, and what to fix about the burners

Bob Bailey said:
BKF will not only clean stainless steel if used properly, it will also repassivate it.
Click to expand...

Since it the flavorizer bars, wouldn’t a coat of veggie oil on the bars and then a high heat burn for 30 mins seal them too?

I’m guessing that sealing them would possibly stop the issue being experienced, but im not expert enough on this subject.

I did use veggie oil to seal my steel plate that I use for pizzas. That has worked well and no rust to date.

Brett-EDH said:
Since it the flavorizer bars, wouldn’t a coat of veggie oil on the bars and then a high heat burn for 30 mins seal them too?

I’m guessing that sealing them would possibly stop the issue being experienced, but im not expert enough on this subject.

I did use veggie oil to seal my steel plate that I use for pizzas. That has worked well and no rust to date.
Click to expand...

It should do a good job of seasoning, but it won't get rid of any surface impurities.