Tim, “in the white“ is a term luthiers use when an instrument is ready for finish. A mandolin is often strung up with no finish and tuned, played some to fine tune the tonal quality for the end product. That’s where that came from.
Yes, two pieces. One as a “girdle” to hold the wings in and the second to tie the legs in.

It’s really not a complicated method, you can do it with one but, it’s much more involved as far as manipulation of the string.
This is how I (occasionally) tie a pork loin, always if I stuff and roll one, sometimes if it’s a little oddly shaped it helps too. 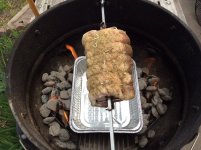 These I do with individual length, not as elegant as a single run which is looped and tightened at each “station”. That is a beautiful technique but, I don’t do it enough to be quick and I don’t see an advantage. 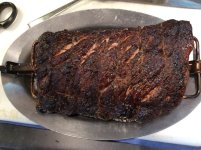 Look up ”Surgeons Knot” it’s really simple, a simple square knot with an extra twist on the first turn, they draw up pretty easily even if the twine gets a bit moist.

Tim, excellent! Yes, I use the surgeon's knot for each tie on a truss. It's a great knot to know, and yes very close to a square knot but you can keep it tight on the first part with just that extra loop. It is a perfect knot for trussing, thanks for mentioning it! I try to go from the drum sticks tied together with the string under the legs, down over the wings and cross at the hole, tie with a second surgeon's knot there, but sometimes I come back across if I don't think the wings are close enough to the body. I'm always confused when I start turning the chicken around, but I guess writing it it's not so hard. I do one piece because I feel like it ties the wings closer to the body, and if I need it I can come back over the wings a second time. I can see how somebody would go for a third or even a fourth pass though, I have just never been shown formally how to truss, I guess if somebody showed me in person, and watched while I did one correctly I'd be better at it.

Very cool luthier information by the way! My most successful band ever (not that successful but still) was a traditional Irish music group and we had a mandolin! Makes sense to play it a bit unfinished, kind of like when you first restring you have to play a while then retune.

I'm going to make a Peruvian chicken later, and I'm going to stuff the cavity with the used squeezed lime I'm going to use for the rub, a whole thing of garlic cut in half and half an onion. Figure that will make it taste even better! I won't be trussing, I will be using the Turbo Trusser for only the second time so far, but I will probably truss a chicken around christmastime, when I will do my first two at one time rotisserie jamboree!

I think using the lime with a head of garlic is a good idea!
I’ve seen dozens of trussing tutorials, they get “elaborate” sometimes. I like the KISS method as much as I can.

I’ve been in a bluegrass band since I was in high school, worked in the greatest music store I could have asked for. Met some very talented luthiers, I try to keep in touch with some of them no matter where they have moved.

I have had a ton of fun playing music, I took a kettle to a BG festival and did caveman turkey legs, some people thought we were too poor to have “Cornbread and beans” so, we were brought some! No one knew how well we were really eating so, we shared some turkey legs. The next year, there were no less than ten kettles out there! Folks were stopping by asking for tips anytime we weren’t playing music or on stage. People were falling down over each other to ask “What else is good on one of these things?”

As the late Charlie Waller used to say, “There’s Nobody like People!”
Great bandleader and amazing singer, look him up.

Busy over here too more later … 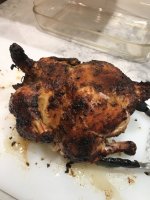 Chicken looks great but we need a little commentary on the results.

So this one I added lime, garlic and onion to the cavity before the cook. It cooked high for the first 15 minutes or so, then I lowered it and the temperature was about 470 or so for the majority of the 1 hour 15 minute cook time. I used the Peruvian wet rub, incredible chicken. Adding onion, garlic and citrus inside the cavity gave all of the white meat an incredible flavor, and this was the new "best rotisserie chicken I've ever made". I'm really having fun making chicken this way lately, now that I know rotisserie is not a slow cook technique. As we get older, I think it's important to try and find food to cook that you enjoy cooking, and that everybody enjoys eating. Those two don't always go together, so that's the goal lately. Wife made squash with onion and garlic in a kind of tomato based soup which we put on white rice, and we had cornbread too. It was a fantastic meal, and man the Peruvian and the Hey Grill Hey methods are pretty much equally incredible. This one was Peruvian, the Turbo Trusser again is very very easy to use and also very easy to clean. I'm setting myself in a way here, and I don't mind it one bit! The skin has a lot of flavor when you do the Peruvian technique, this skin was not exactly crispy but again the Peruvian wet rub gives it so much flavor that it almost doesn't matter.

I agree about the flavor making the chicken! I’ll pass on a little crispy for that amazing flavor!
The “herbal infusion” report makes perfect sense, glad to hear it worked out. Now, practice trussing a few times and keep on having FUN!
I completely agree about cooking for friends and family, there is no greater feeling (like last night) when the door opens as people arrive and you hear “Oh, my Lord! What smells so good?” My banana bread seems like a show stopper every time the house smells like it. I always make 2 loaves and send one home, granddaughter just gives the adoring look.
Thats the pay off when you have spent years learning what is not just delicious but, fun to make and when the faces light up with the first bite? Thrilling!

Good to see this thread still going, crispy skin is one of life's greatest pleasures

My Turbo Trusser arrived in Saturday's mail. Apparently these things are indestructible, the US Post Office took their best shot and couldn't destroy it 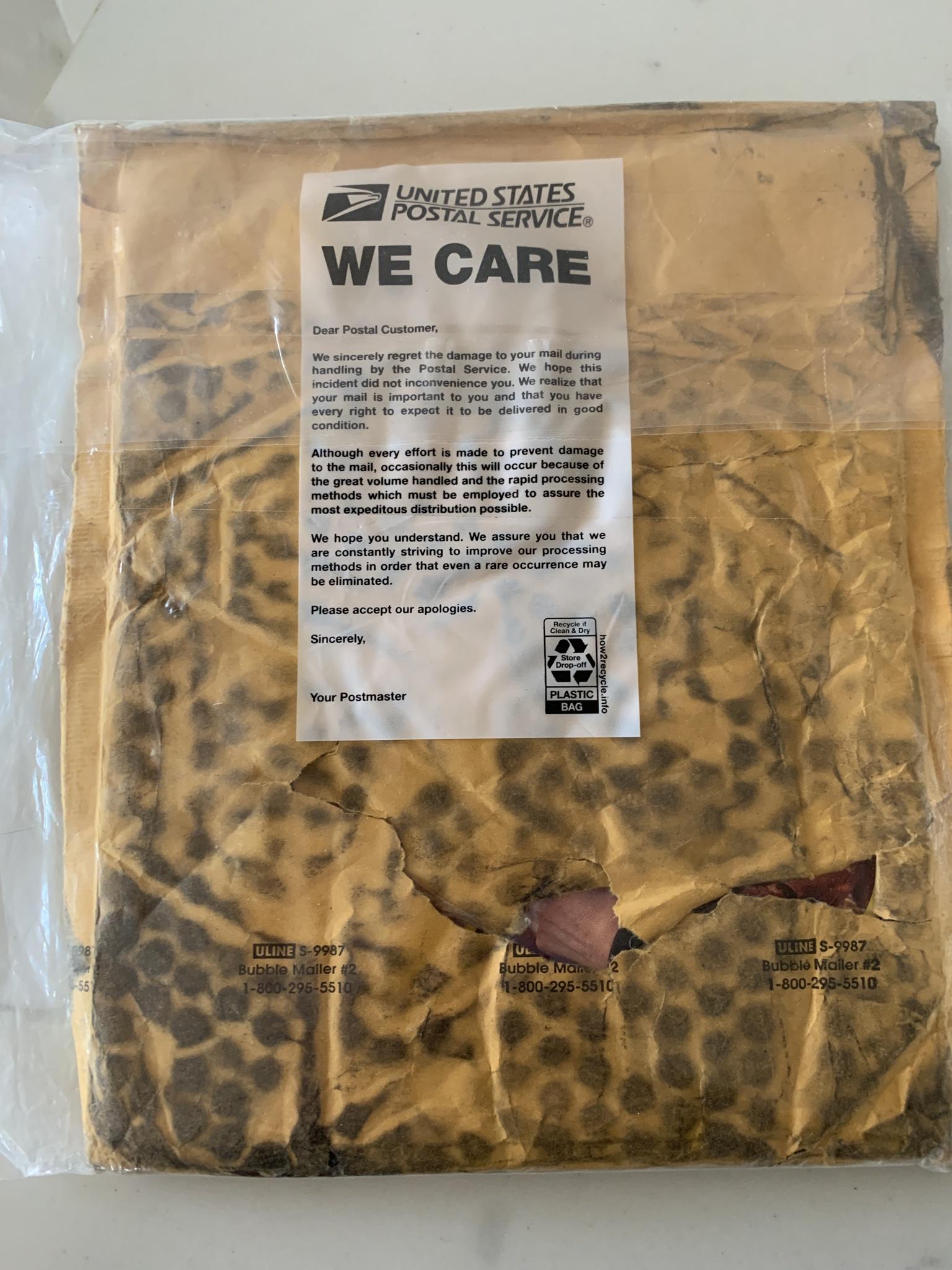 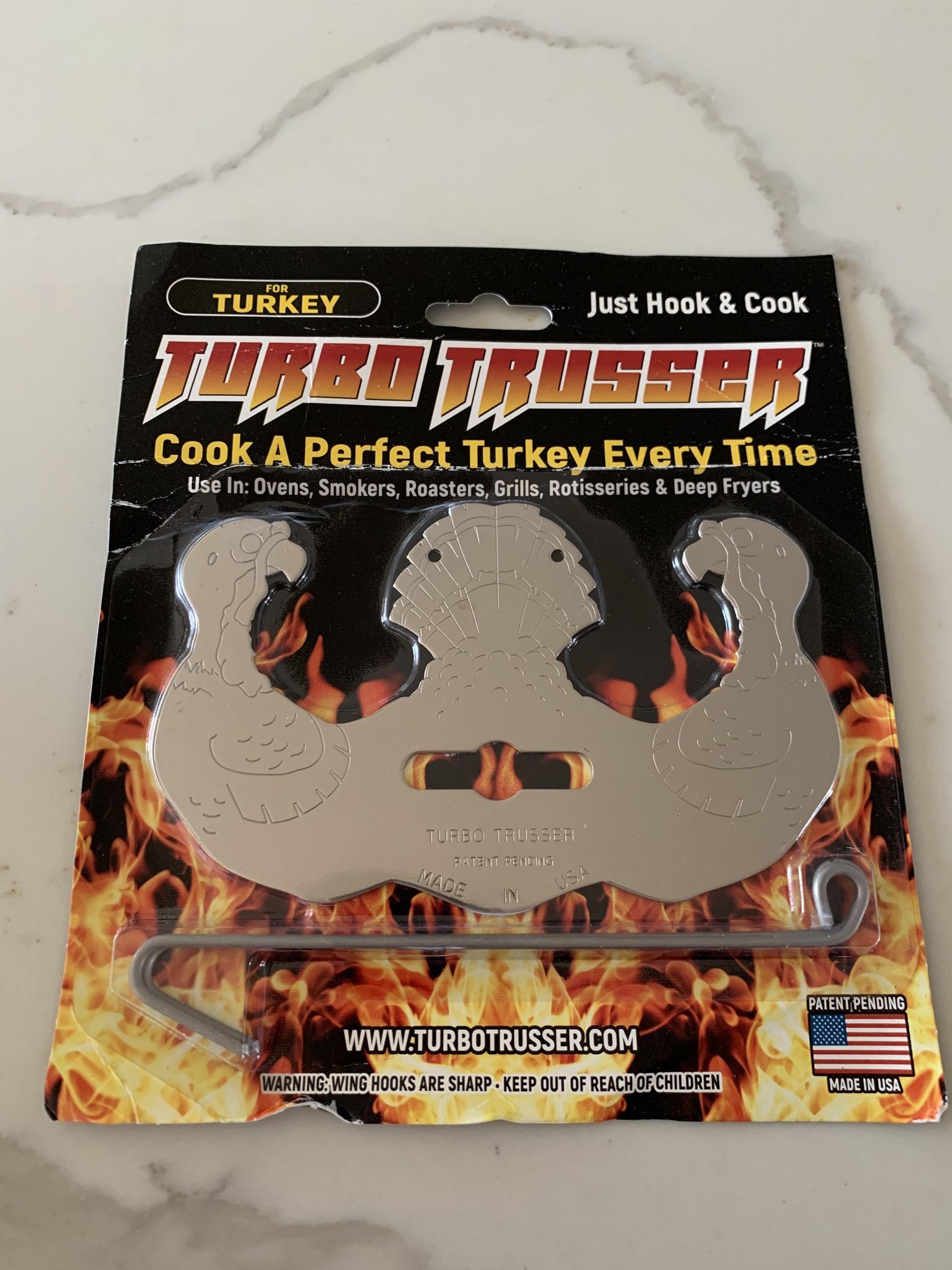 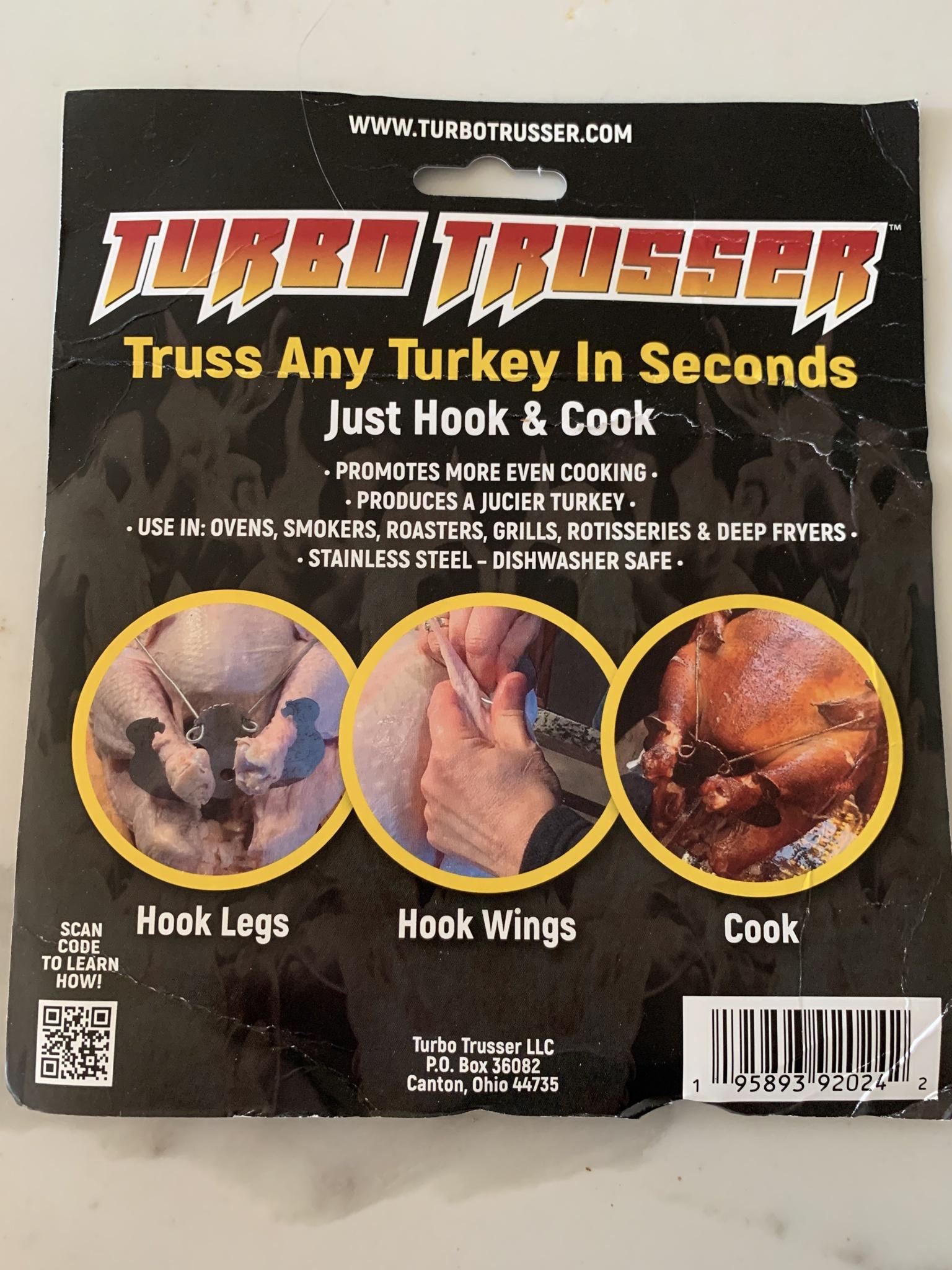 I will be putting it to work Thanksgiving

Chuck I think you'll like it, but let us know! It makes the whole roto experience faster with no trussing. I thought the chicken came out good, but it was gone before I had a chance to form an opinion!

THyde said:
Chuck I think you'll like it, but let us know! It makes the whole roto experience faster with no trussing. I thought the chicken came out good, but it was gone before I had a chance to form an opinion!
Click to expand...

To be honest, I never really did truss. The wings would flap in the beginning but they would ultimately solidify up next to the body as the cook progressed. What I'm looking forward to is not having my aromatics fall out. I've been in contact with Brian at Turbo Trusser and invited him to the forum.

ChuckO said:
What I'm looking forward to is not having my aromatics fall out.
Click to expand...

The Turbo Trusser is ideal for that. When you put the spit through it, the plate presses up against the cavity and holds even individual cloves of garlic inside. Mine was packed with stuff, two squeezed out lime halves, half a big onion and a whole knot of garlic cut in half and nothing fell out.
Good idea tellin them fellers about the forum, I would be shocked if they were not rotisserie fans judging by the device. Same with the Meater folks, I'd be shocked if they did not spin.

Happy Thanksgiving everybody! I hope to see some rotisserie turkeys on here!

Yeah, happy Thanksgiving!
Sorry, no roto poultry here, my menu was disclosed in the “who is NOT doing a turkey…” thread.

THyde said:
Happy Thanksgiving everybody! I hope to see some rotisserie turkeys on here!
Click to expand...

Sorry but we are going to a Thanksgiving Meetup and I will be trying to smoke a turkey next week. I did spin a turkey in the spring and it came out pretty good. 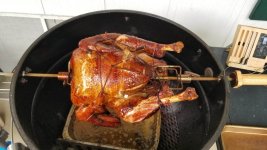 That is nice looking! I have never spun anything larger than a football!
J 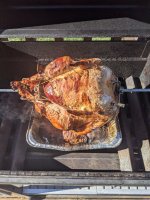 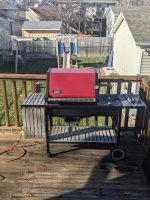 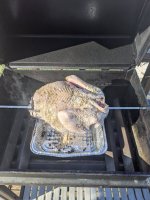