RNMixon said:
Exactly! Yes, the two on the left are the ones that went bad. The one on the right, labelled "TIANKONGRC", seems to be much better.

It would not fit the keyhole slot, so I had to use a small rat tail file and relieve it a bit.

But works fine. I'll be sure and post some negative feedback to the seller on Amazon for the first two - though since I've cut then leads I probably can't return them.

I'm an avid RC model guy with a box of servos of all kinds. There must be a hundred of them. Some are dirt cheap and some are on the expensive side. NONE of them are dead reliable. Quite a few are dead on arrival and it's not uncommon for them to fail in use. So think about servos like a bunch of grapes; most are OK but a few are not up to par. I would suggest that everyone building a servo damper buy at least one spare servo because you can never tell when yours will shoot craps.

The most ordinary servo is a 9g size. To add to the confusion, the nine gram designation is just a suggestion of the weight and doesn't refer to the torque of the servo. Furthermore, they all seem to be different in size and the splined drive shafts aren't standardized. The servo arms aren't the same size either.

Most of the damper designs for our use rely on sealing properly only when the vertical dimension from the mounting surface of the servo to the top of the case just below the drive shaft is exactly correct. Too tall and your damper leaks air. Too short and you have too much friction. In practice, it makes substituting a different servo tricky. You MIGHT sand or file your way to happiness or you might find that the servo you have on hand simply won't work.

I know all this because I figured with my box of 100 servos, I could just pick through them until I found one which would work with the damper components I made on my 3D printer. Those slightly differing dimensions have no consequence for RC model builders, but I learned, as you did, that BBQ dampers are a different story.

Since I have so many servos, I decided to redraw and re print the upper part of my Adapt-a-damper. For many people, simply buying the EXACT recommended servo (and a spare) is a good solution.

As for some servos being "counterfeit", that might be something of a stretch. These things are all made in China and it's hard to tell if a particular servo is a knock off or simply a new batch that Tower Pro (or any other company) contracted from a different source. Even within brands, things are complicated. Take a look at this link: https://servodatabase.com/servos/towerpro
It shows a bewildering variety of Tower Pro servos ranging in price from two bucks to thirty bucks, each slightly different in size and performance.
M

Bob Walters said:
As for some servos being "counterfeit", that might be something of a stretch. .
Click to expand...

Two on left are definitely counterfeit.
Other is a clone, which is often better than pure counterfeits.

I used to fly rc. These mini servos are total junk. Complete utter chinese trash. Just like 99% of what comes out of China today. I can't imagine anyone using one of these things for anything but a barbecue damper or the cheesiest science project imaginable.

My servos by airtronics and futaba are completely reliable, zero chatter. Held up to many high-speed impact crashes in large planes.
10x cost too, at least.

Much heavier too of course. 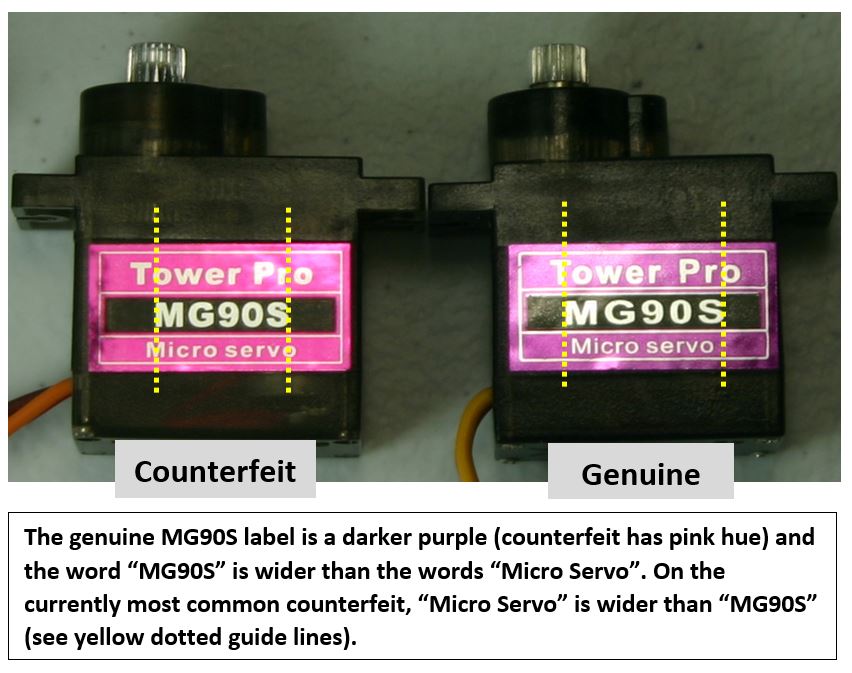 Hi Ralph!
I remain the happy owner of one of the early beta RD3s.
We talked briefly in 2015 about changing from the 50mm to the 70mm fan for more power. In the end I decided to keep to the 50mm for good low temperature control. For high temperatures I simply open the screen part-way to provide extra air and the RD3 is then able to regulate at the higher temp (up to 900 degrees).

The one thing that I had to change was the rectangular to round adapter to fit the home depot 1" pipe. Mine softened at high temperatures until the RD3 fell off. I asked a mechanical engineer and machinist friend for help. He graciously made me a round to rectangular adapter from a 2.5" round graphite rod. It has very low thermal conductivity and a very high sublimation point so it prevents any softening of the RD3.

I set up my RD3 connections to be probe1: Thermocouple, Probe2&3: TX-1001X-OP. Alhough I typically use probes 2 & 3 plugged into the heatermeter itself via gold-plated extender cables since that is inside a weatherproof chest.

5 years, WOW, time flies! Glad the RD3 is serving you well, mine too, years in service and still going strong....
J

Sorry if this has been answered before, but I have a heatermeter 4.2 without a TC, will doing the RD3 with the Heatermeter Aux. Thermocouple board add the ability to have a TC?
R

Jesse C said:
Sorry if this has been answered before, but I have a heatermeter 4.2 without a TC, will doing the RD3 with the Heatermeter Aux. Thermocouple board add the ability to have a TC?
Click to expand...

awesome thanks! My biggest regret was getting my HM without the TC. Didn't really think about it at the time, but right after I was done building it I was kicking myself for not spending the extra $$ on the TC board. Thanks!
W

Hi Ralph, My RD3 blower died. Fortunately I had the high flow RD to use temporarily. I found a 108-BFB0512VHD at mouser, but I forgot that the female PCB connector must have come with your parts. Do you recall that part number or identity? I don't have any part info in my notes and I noticed that there are a bunch of different standards for pin spacing. Thx Web.
W

No connector, just black and red wire punched into the RJ45 jack? Cut the connector off.
W

Mine has a white female 2 pin PCB connector. Interestingly, when I looked more carefully it appears that the fan blades actually melted due to heat exposure.

OH! you have the external probe setup. I have no idea then. You could get away with a simple female dupont connector. Not much on amazon. Red is 12V and black is GND. Thinking those connectors should be on the inside? Strange setup.

I think I have the tool to pull the pins on the existing female socket, so I will probably re-solder the new leads to them given that I only need the one. Hopefully I can look for low impedance between the black fan lead and the black servo lead since I unplugged the servo without paying attention to its orientation and I don't think they are keyed.
R

Web Dove said:
Mine has a white female 2 pin PCB connector. Interestingly, when I looked more carefully it appears that the fan blades actually melted due to heat exposure.
View attachment 6007 View attachment 6008
Click to expand...

You've got an oldie there! Looks like an early RDTC implementation, all wires are internal on the final RD3 design. I have a bunch of those connectors, shoot me an email to rotodamper AT hot mail dot com, I'd be glad to throw a couple in an envelope and mail them to you.
Sorry for the delayed response, been a bit distracted lately....
You must log in or register to reply here.
Share:
Facebook Twitter Reddit Pinterest Tumblr WhatsApp Email Share Link
Top