Your favorite soda/pop growing up

Back in the day we had a local company called “Pic-a-pop” where they would bottle pop (soda) in various flavours. My Dad would bring home a crate of mixed flavours, but I was always partial to Lime or Grape.

A cold A&W rootbeer was also hard to beat. Wish they still sold the A&W cream soda here in Canada.

This reminds me of watching M*A*S*H with my Dad…and Radar with his bottles of Nehi.

We went to the A&W Drive In and got root beer floats. They were a real treat!!!

Kelly C said:
We went to the A&W Drive In and got root beer floats. They were a real treat!!!
Click to expand...

We used to take the jug to A&W to get it refilled.
G 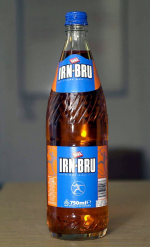 Some have mentioned old vending machines... Dad used to stop by an Army-Navy surplus store on Saturdays to shoot the breeze with the guys that owned and ran it. They would talk about hunting and fishing trips and ogle over the latest military surplus arrivals. They had a little old Coke machine at the back of the store which took dimes.

You put your dime in, opened the little vertical glass door, and pulled on any one of the bottles in the vertical row. They were all stacked sideways and when you pulled yours out a new one would (usually) fall into place behind it. You then opened the bottle using the built in bottle opener (caps fell into a bin inside the machine). When you finished your Coke, you put the empty in the wooden crate next to the machine. You were not supposed to take the bottle from the store.

These were the old school 10 ounce heavy green glass bottles, which got refilled at the Coke plant. Most of the bottles had two frosted bands around them from wear over the years (one at each of the widest points). The finish on the glass actually wore from where they touched eachother (I assume in the production line and the dispensing machines - because the wooden crates had wood separators between the bottles).