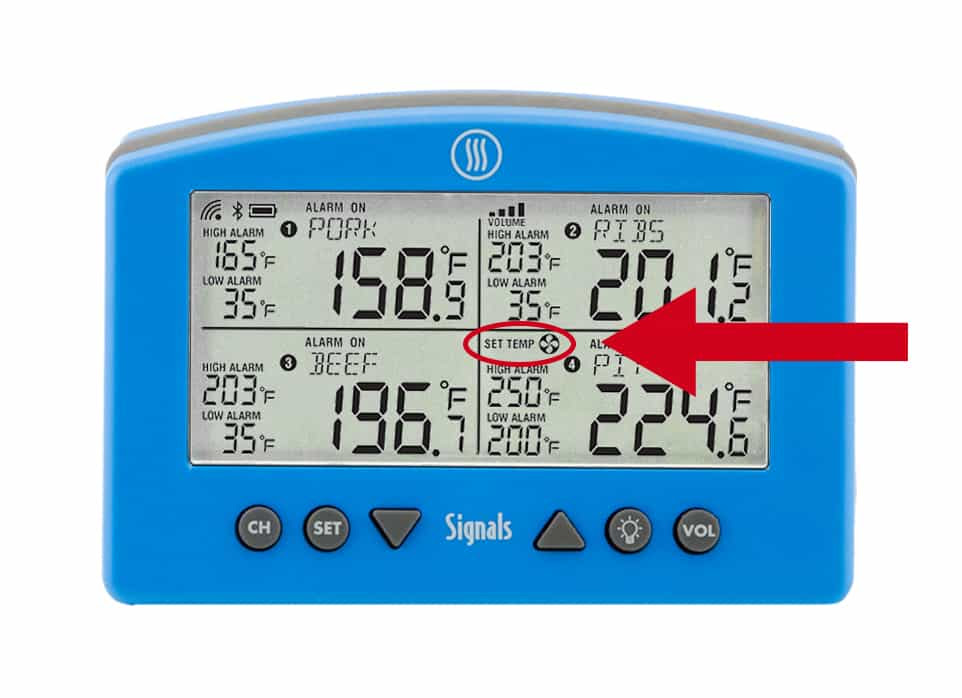 Have you found our secret display icon? When you first turn Signals on you can see a Fan Icon and the words “Set Temp” appear. Any guesses as to what that might be for???

If your guess is that Signals is set up to control an upcoming ThermoWorks fan blower for your smoker, you wouldn’t be wrong!

Signals is secretly two products in one. Look for the companion product in Summer of 2019. It will automatically pair with all existing Signals.

Thanks for the heads up!

I did not notice that, but I just went and checked mine and boom! That's cool. I'm sure I'll be giving it a try when they release the other parts. Thanks for passing along.

Thanks for the heads up, Chris. Will have to check it out when mine arrives. Said 2-5 days Green color (so I don't misplace / loose it soo easily...)
Will be used to replace my Stoker.

Bob, is your Stoker not working? Mine is still going strong!

Glad to see you back online Vince !!!!

Mine is still working, but...

I kept our WSM (single 22) stored outdoors in the weather w/o any cover. The fan and dog bowl was almost permanently attached to the WSM. I fully gasketed it (bowl) back in 2011 and it became stuck to the WSM. So it too sat outside. The phono plug connector's white nylon cover has deteriorated to the point where it no longer protects the attached circuit board. I talked with Ken ( I think) about getting a replacement nylon cover but his offer to replace it never materialized.

During one cook, the box took a dive to the ground and broke off the rear antenna's tip. Turned off the WiFi, since I hardly ever use it. Never found the tip and the enclosed antenna 'spring' got lost sometime thereafter.

The Stoker has been an Excellent ATC. Could not ask for more, control wise! But I want something that I can replace it with for the long run. Since I run only a single WSM, the Signals unit _may_ be the answer. Time will tell...

Ordered my billows last night. Can't wait to try it out.

JKalchik said:
46CFM fan, that should be sufficient for a huge smoker.
Click to expand...

And you can gang-up two together for really big smokers!

"An optional expansion connection kit is available to pair two Billows with the same controller for large smokers or cookers, but you’re not likely to need it, as powerful as Billows is."
J

I can't contemplate how big of a smoker you'd need for a 46CFM fan, let alone two. Or it's horribly leaky, which is why I ditched my horizontal offset and built my own.

Even the monster commercials should need that much forced airflow.
M

46 is waaaayyyyy too much for a wsm. Hope output can be limited,

What concerns me most are 1) the suggested method of controlling airflow (closing down the exhaust vent to 1/8 open) and 2) the lack of an "automatic" means of stopping the natural airflow thru the blower when off. #1 _may_ create enough back pressure that will limit #2. Not an idea situation....

The (Rocks BBQ) Stoker has a smaller cfm blower and a flapper valve in the blower assembly that prevents natural flow when the fan is off !

Used the Billows for the first time yesterday. Just a couple racks of ribs.

The Billows and Signals are a Keeper !!!

I assembled Billows to the Rock's BBQ Stoker dog dish thus using all 3 openings rather than just 1. Worked well. Started the cook with the exhaust vent 1/8 of the way open, per Billows instructions. Opened the vent fully open shortly there after with excellent results.

The Billows and Signals are a Keeper !!!

I assembled Billows to the Rock's BBQ Stoker dog dish thus using all 3 openings rather than just 1. Worked well. Started the cook with the exhaust vent 1/8 of the way open, per Billows instructions. Opened the vent fully open shortly there after with excellent results.

Glad to hear, mine arrived Saturday, I set everything up today to get acquainted, probably do a pair of Pork Butts next weekend.
T

First smoke complete.... The good, great readings, easy to see display, I like the logic for the fan as it starting pulsing well before the smoker temperature approached the target set for the smoker. I did have to close the upper vent most of the way as suggested by ThermoWorks, the temperature was slowly rising without the fan running, once I adjusted the upper vent to about 20% open, the temperature started dropping and the fan took hold of controlling the temperature again. Smoker temperature was kept in a tighter range than my Stoker.
The bad.... poor connectivity, everything worked great for the first 3-4 hours, then multiple overnight alarms for low meat temps, not sure what was going on, the graphs showed drop outs of the meat probes, but the smoker probe kept recording in the graph, all were still reading on the base unit. Once morning came I adjusted the unit location, made channel changes to my access point with no resolution. The App (iOS) would display data one minute, then "No Connection" for all the sensors or sometimes just the meat sensors.
I did check WiFi signal strength which showed as "Good" on an App I have used in the past to map/diagnose WiFi problems for others, my iPhone and iPad both recorded internet speed test of 85 down (limited by policy) 20 up sitting next to the Signals Unit.
I will be contacting support on Monday.