This should be a Weber

They should have made this the SmokeFire. It would have filled the pellet grill market slot they wanted to fill and yet been so amazingly true to its heritage by being charcoal.

As a Weber fanboy, seeing this as a masterbuilt instead of a Weber literally made my heart sink.

Why, Weber? How did you drop the ball on this one?

It is quite interesting how these gravity feed systems get on. Seen the wood burning ones. That is where having the hopper widen at the bottom is so important to prevent the bridging problem. I agree that this would be a nice addition.

Still hoping that Weber really solidifies the pellet smoker. Make a few improvements, stiffen it up, add a bit of material and voila a brisket smoking machine. Would love to see a larger, and perhaps more vertical smoker too. More capacity.

I think this is a pretty interesting concept I remember looking at a while back. I have some reservations about durability, but it LOOKS pretty decent. One way to stay true to real charcoal cooking with a lot of the convenience of a pellet grill.

I don't know that I could stomach a Weber Gravity Grill section, lol. 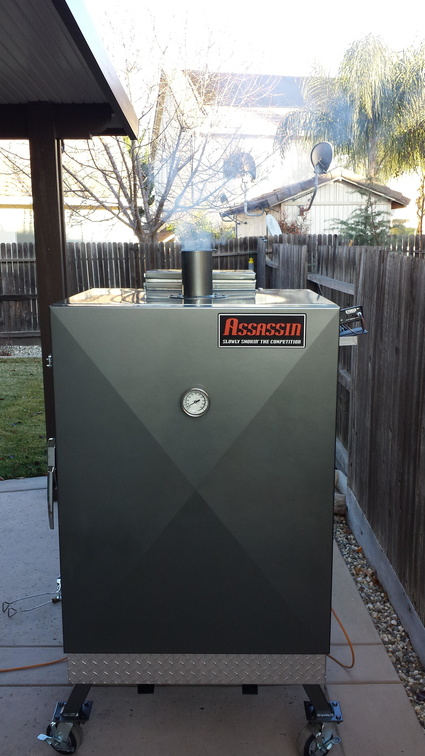 I've owned a larger Assassin 28 which is a gravity feed smoker. I wasn't overly impressed. I think to each their own, but I prefer pellet cookers.
T

Of course superdave owns one. Its just out back behind the 747...
Cool!

I have been considering one of these. But I really want to see
and touch one first. Like Jon, I am concerned about the quality,
and durability. I love the concept though, and agree, this should
have been a Weber.

Just off the cuff estimation .......... I would say well over half of the contestants on the BBQ Pitmaster series were using a gravity feed smoker.

That said, in that comp world, they want set and forget. They don't have a lot of time to tend a smoker and they want the consistency a GF or pellet pooper provides. And they put so many flavors on the meats, smoke gets hidden.

Old Country has made a gravity feed also.
J

I built a fully insulated gravity fed charcoal smoker (and there's a few others here as well.) I'm very happy with what I built. Yes, a tapered charcoal chute wider at the bottom is pretty much mandatory, especially when I'm burning natural lump. Even without an ATC, these do maintain temperature pretty well on their, with an ATC, +/- 1 degree F is achievable. And with mine, I can smoke 10 full packer briskets at once, burning less than 2 lbs/hr.

These insulated gravity feds are expensive to build, though. There's a lot of steel and fabrication time, as well as being just plain heavy (mine runs around 1,200 lbs.) The MasterBuilt may be a gravity fed charcoal burner, but I'll bet it burns almost as much fuel as mine does and only smokes about a quarter of the food. OTOH, I could buy at least a couple of the MasterBuilts for just what I have in steel.

There's a big market for backyard pellet grills. These things are light, easy to move, easy to run and can turn out pretty good food.
T

Pic pic. Sounds like a great bbq machine. 10 packers at a time. wow. Also important to understand that in gravity feeds the chamber is closed except at the bottom, air wise. Otherwise the upper charcoal or wood would catch fire. Interesting how they manage to design them to perfectly feed and keep the fire going, while warming the fuel above. Adjusting the lower air valves etc.

I went to pick up a Performer from a guy last night. While I am there he
mentions he hates to sell it, but doesnt use it anymore. He has a pellet grill
and a new Masterbuilt. Sure enough, he did. I asked to see it, and spent a
minute looking it over. Just as I feared, it is primarily made of thin gauge,
lower quality metal like you would find on Char-Griller, or Char-Broil. But that's
what you are going to get in that price range. He said he had got it around
Xmas and has used it about 20 times already. He said it costs more to run
than the pellet grill, but didn't say by how much. But he raved about the flavor.
Great charcoal flavor. However, I noticed his selection of pellets, and they were
all fruit flavors. I mention Lumberjack Char-Hickory, of which he had never heard of.
He was not a fan of the thin gauge metal either, but pointed to his 5 year old
Camp Chef of the same quality that was still in perfect condition. He keeps all of
his grills inside year round, just as I do, and said he was not worried about either
of them rusting. I agreed. GRILLS OF THIS QUALITY MUST BE KEPT INDOORS.

I would like to take a closer inspection, particularly of the lower section, to see
the quality of materials and construction. My fear at this point is how they will
hold up overtime to the higher heat these grills produce vs a pellet grill.
I may very well end up owning one of these by years end. At $497 delivered
to your front door from Amazon, it just seems like to good of a deal to pass up.
J

Tony-Chicago said:
Also important to understand that in gravity feeds the chamber is closed except at the bottom, air wise. Otherwise the upper charcoal or wood would catch fire.
Click to expand...

Indeed, commonly referred to as a run-away. Once I figured out how it worked, I was pretty well set on building one. As much as I'd like a stick burner, this works awfully well for me.

The first pic is from the seasoning run. The top edge is just under nose height for me. The door alone weighs a couple of hundred lbs, it was all I could do to dead-lift it to put it on jackstands so I could weld the hinges, and I can swing it with just my little finger.

The second picture was only a few days later, when I smoked food for 70 people, and only used maybe 60% of capacity.

As of now, it's travelled something like 2,200 miles hard mounted to the trailer in the 2nd pic, and nothing has moved. The cook chamber door has just not sagged in the least.

99% sure I am going to pull the trigger and buy the Masterbuilt this week.
I joined a FB group this weekend, everyone is raving about. I am still concened
about longevity, but it will be stored inside. I had the same concern when I
bought my Camp Chef. 2 years later it still looks new.
J

I'll be interested in your impressions & experiences. As tempting as it is, I'm just burned out (yes, pun intended,) on the economy stuff foisted off on the mass market.

I will be very interested as well, Dave. I can live with something like that needing to be carefully sheltered as long as it works well when you wheel it out to do its job! The same can probably be said of most newer Weber gas grills and most pellet grills as well. I do leave my Rec Tec outside (no real choice) but it has a fitted Rec Tec cover. Seems to be holding up OK although there are some signs of weather affects. I am hoping when I move to have a shop or at least a garage for it and most of my personal grills to stay in away from the elements - and WINTER that I know little about!
T

Be nice to have you closer but I feel obligated to tell you that it snowed here yesterday...

Trigger pulled. Delivers Friday. Assembly and seasoning this weekend.
Hope to have a review worth reading in a couple of weeks, and if CV19
shuts me down in the coming weeks, there may be many reviews. I
really look forward to comparing this side by side w/ my pellet grill.
One of these will be re-sold by Independence Day.

The grill arrived yesterday. I had it shipped to work, and brought it home last night.
I didn't have much time, but I did managed to get it unboxed, and get the good old
hands on feel. I hear that there are many places selling this unit assembled and from
doing a bit of reading this thing really is quite the chore to put together. I will snap a
pic or two once I begin assembling and a few more through out the process.
My very first over all impression is disappointment, but frankly it is what I was expecting.
Some extremely flimsy, low grade metal, particularly on the heat guards. What I'm guessing
is powder coated metal.
Most disappointing however, is the cast iron grates. They are extremely thin and light weight.
They actually feel like they weigh about the same as some cheapo Hongso stainless grates.
These will likely need to be replaced SOON.
For what it is worth though at this point ...... I said all the exact same things when my
Camp Chef arrived. 2 years later I have been very pleased with it and have not had to
replace anything. ........ more to come ...........