Thanks Chris A: Successful first Pork Butt Cook on WSM

I got a WSM about a week ago, and did a first test cook with no meat that went poorly. I had trouble registering for this forum, and by way of explaining that I was legitimate, emailed about my attempt to register and the issue I wanted to post about. This was the extraordinarily helpful reply I got from Chris Allingham:

As for your question...you don't say what kind of fuel you used or how much you used, but whatever it was, it wasn't enough if you ran out at 2 hours. Still, it's not a realistic test to run the cooker without meat, because when you add cold meat, that 350*F you experienced at the beginning will plunge to 200*F and you'll be writing back to me asking why you can't get the cooker temperature UP HIGH ENOUGH.

You can run the WSM at 270*F using the Minion Method and with the water pan empty, and that would be my recommendation. Place 3-4 smoke wood chunks on the charcoal grate, fill around them completely with charcoal all the way to the top of the charcoal ring, leaving the tops of the wood chunks exposed. Then light 30 briquets and spread them over the top of the unlit charcoal and the chunks. Put the water pan in the cooker but leave it dry. Put the meat on the top grate. Set your Flame Boss to 270*F and adjust the vents per Flame Boss recommendations. You should have enough fuel for 9 hours at 270. For that last hour at 295*F, you can try bumping up the Flame Boss to that temp and giving the coals a stir to see if there's enough fuel left to get the job done, but you may consider just moving the foiled butt to a 295*F oven...at that point, a foiled butt doesn't know the difference between a charcoal fire and your gas/electric oven...BTUs are BTUs.
Click to expand...

I followed his instructions exactly yesterday, along with using a bunch of stuff I learned from the virtual weber bullet website, and it was a huge success. So, many thanks Chris!

For the record, I was using the Kingsford charcoal recommended on the website, plus pretty much everything else recommended there (starter cubes, gloves, chimney, etc). I will post my notes from my cook in the next post.
C

This was an attempt to reproduce the Franklin BBQ pork butt cook from masterclass.

5:45am: Woke
6:00am: Lit Chimney with 30 coals
6:05am: Meat Seasoned
6:10am: Poured coals on nearly full coal disk in WSM, no water in water pan
6:25am: Closed bottom vents at 250 degrees and closed top vent most of the way. Allowed flame boss to take over.
6:40am: Meat on at 275 degrees, pit dropped to 222 after, but recovered quickly
9:40am: First opened top and spritzed with cool apple cider vinegar, spritzed hourly after that
2:40pm: Took off smoker to wrap, meat was at 194 degrees
3:40pm: Pulled at internal temp of 205 degrees, found some internal temps at 203 degrees, but near edges at 209 degrees, brought in wrapped in a towel to rest
5:05pm: Unwrapped, and served

Total cook time was 9 hours. Plan had called for 10, with the last hour at 295, but that last hour proved unnecessary. The cooker was really going strong at that point. Had the meat needed it, I was eager to try bumping it up to 295, but it wasn't necessary.

Result: Meat was delicious and the family loved it. It was a huge success and a lot of fun, especially for a first ever cook.

That said, if I learned anything:

Well, there are so many things you will find here to help you on your smoking journey. This one went, I’d say, very well indeed! Barbecue can be a very touchy and sometimes cruel endeavor. This went well, the next one might be more challenging. So far, I’ve had some go so smoothly I might as well have taken a longer nap. Others have fought me hammer and tong! Be patient, enjoy the ride!
Chris is aces to say the least!
C

One thing I realized I did not mention, the grate temp was at 270 all day. The flame boss screenshot shows a set temp of 240, but that was because just before I pulled it, I reduced the temp in the hopes of extending the cook.
R

Awhile back I totally forgot my Password and Chris A. quickly got me back online with a very thoughtful note.

Congrats on a successful cook!
K

Chris,
Welcome to the community, and congrats on a great first smoke. I love pork shoulder! I had been doing my shoulders at the 275 range for a while now, but just took my last two shoulder cooks down to around 235 - 245 and have really liked the results. I like to start late at night (around 11 and get the meat on by midnight, I don't go to bed until 1ish) and let it go into the next day.
So what is up next to smoke? I recommend some pork ribs!

Chris Jones said:
The smokey flavor was good, but I’d like to give the smoke more time to clear next time.
Click to expand...

What do you mean by this?

Thanks for the detailed notes on your cook.

Arun L. said:
What do you mean by this?
Click to expand...

Yes what do you mean by this? Do you mean wait longer before putting meat on for the smoke to turn from smoky and white to almost clear?

I am doing the same cook this Friday. 5lb pork butt bone in. Did a 4lb pork butt (no bone) a month or 2 ago that turned out great.

1) Going at 250d target with Minion method with Weber briquettes and cherry wood chunks. Water pan with water. Spritz with apple juice or acv / water mix every 45 mins.
2) Undecided about binder and run as of yet.
3) Pulling at 160-165d and wrapping in foil to oven at 275d until probe tender (usually around 203-207d).
4) Resting for about 45mins.

Thoughts and suggestions for binder and rub?

Last time I used the following:

I generally go for mustard and worcestershire sauce, although the mustard has no residual taste for the meat if that is what you are after.
I use this on pork ribs always, and last time on the butt.
I also am a fan of killer hogs flavors as may have noticed. The outside surface area is minimal compared to the entire roast so I go fairly heavy on AP Rub and very heavy the BBQ rub. Meat comes out dark in colour because of the BBQ rub and I generally like the taste of this combination.
I also have many other rubs but so far nothing has tasted as good for me, there is a Canadian supplier for killer hogs as shipping from the killer hogs website to us is a no go. If you wanted to acquire some killer hogs check out the RUB SHACK, it's based out of London ON and I get my order in a matter of 2 to 3 days after placing it. He carries KOSMOS too, I have never tried it though. Right now there is a 10% discount code found on the main page before entering the rub shack. Good luck on the cook Friday, not sure if you ordered today if you would get it in time though. 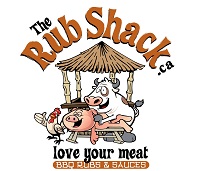 At The Rub Shack we search all over North America for the worlds best rubs and sauces to deliver you the premium barbecue sauces and rubs Canada. Get the best items at reason price from our store today.