Staff member
I will be volunteering at Dana Point State BBQ Championship in Dana Point, CA on Saturday, October 4. I've heard great things about this event, can't wait to check it out. Stop by and say hello if you can!

Staff member
Not sure if I'm driving or flying. If driving, I assume it's best to avoid I-405 and I-5 through Los Angeles and go around by taking I-5 to I-210 to 57 to I-5 into Dana Point? Can anyone confirm that route as being best?

As far as which frwys to take, time of day is key. Best to avoid any frwy 0600-0900 and 1500-1800. The 5 can be fast, all depends upon time and construction.
The event is located just north-west of Dana Point proper at the Sea Terrace Community Park, next to the St. Regis Monarch Beach Resort.

Looking forward to working the tent with you.

That generally is the best route, but as Bob said it all depends on the time of day. There is major construction on the 5 south of the 710 all the way to Orange county line. I doubt construction will be completed by then .

I hope to make the event the Oct 4 is my Birthday, never been to a BBQ competition before.

I want to go. Hopefully there's no family event so we can go.
T

Interesting... I've never been to a BBQ competition and this is doable for me in a day, albeit a long day (I'm in Ventura).

Have to put this on the calendar and see what salutes...

Wishing You and Your Team, BBQ Excellence at Dana Point.
Looks like Arlie added a few more. Up to 106 teams now, with 'The Last Name in BBQ' taking that spot

Staff member
I never really closed the loop on our adventure to Dana Point last October...

My plan was to volunteer in the judging tent, but several weeks before the event I got a call from Harry Soo asking if me and my wife Julie like to join Harry and Donna as helpers on their respective teams at Dana Point. How could we say no?

We drove from San Jose to San Clemente on Thursday Oct. 2, arriving about 11:00pm. Next day, we met Harry, Donna, Amy (Harry's daughter) and Miranda (Donna's daughter) at Sea Terrace Park around 11:00am and helped with the setup of both team booths. We also made a run to Walmart to pick-up a few essentials for Harry that he was missing. 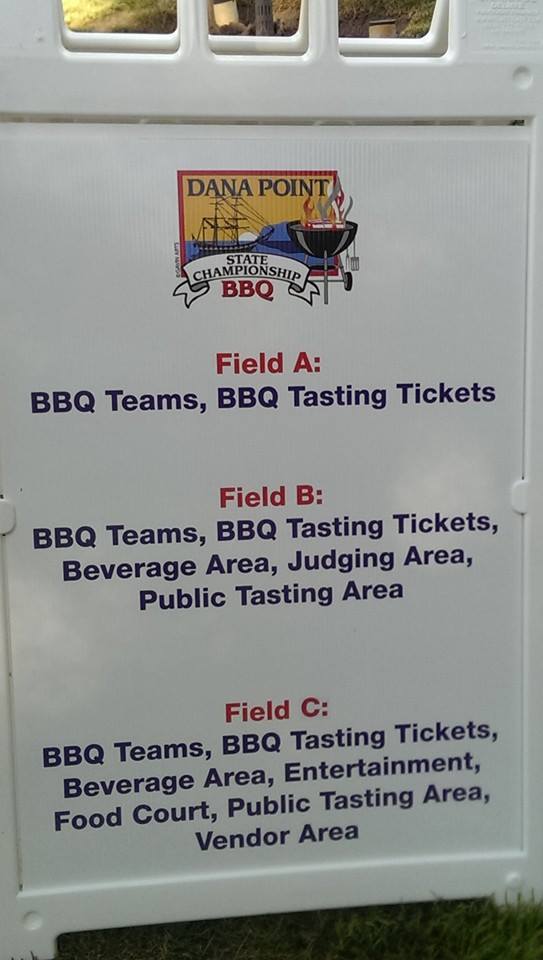 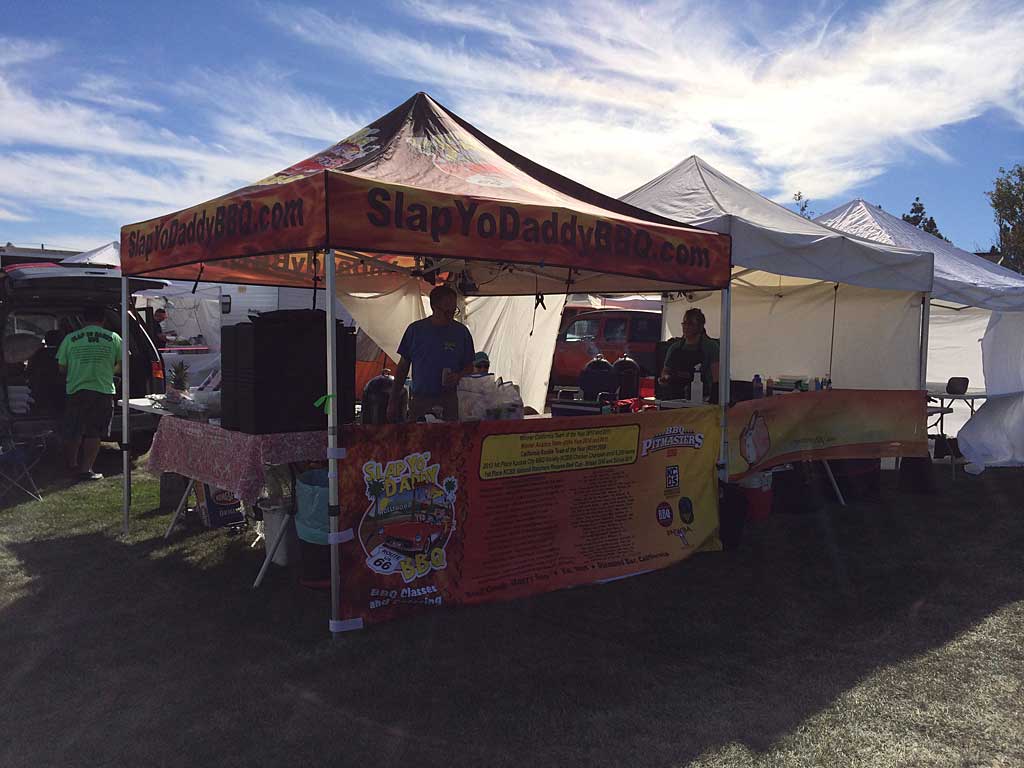 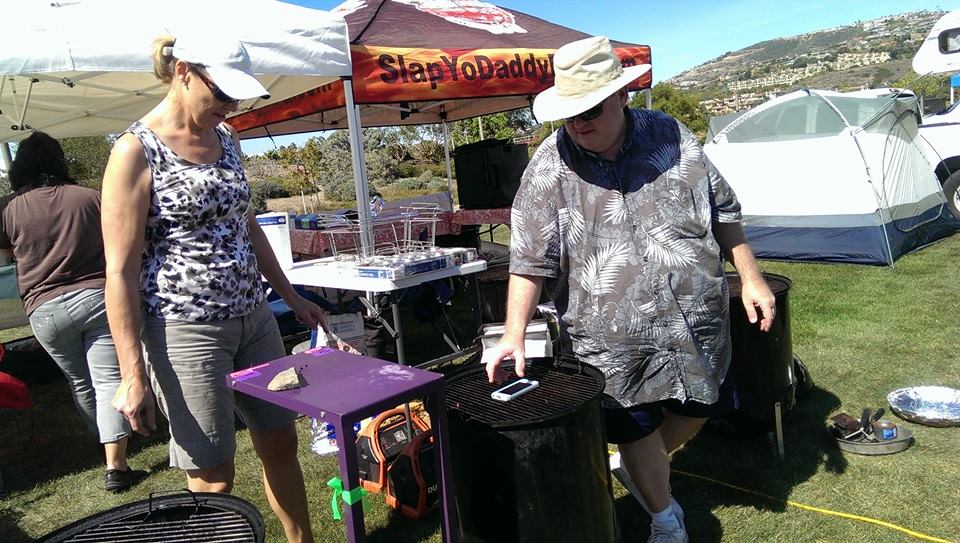 With setup accomplished and cookers leveled using an iPhone, we all headed off to a whale watching cruise chartered by the event organizer. We didn't see any whales that day, but did see thousands of common dolphins. It was great fun and so beautiful to get out onto the water. (Had we been there the next week, we would have seen a massive numbers of whales...a phenomenal number of sightings has continued off Dana Point all winter long.) 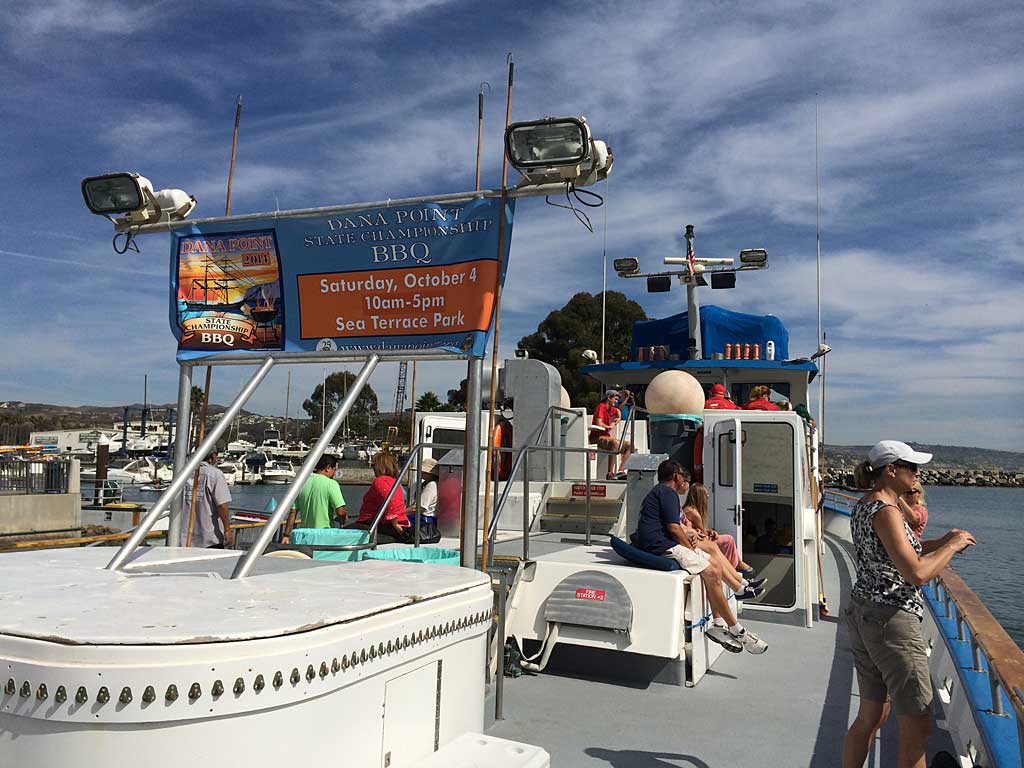 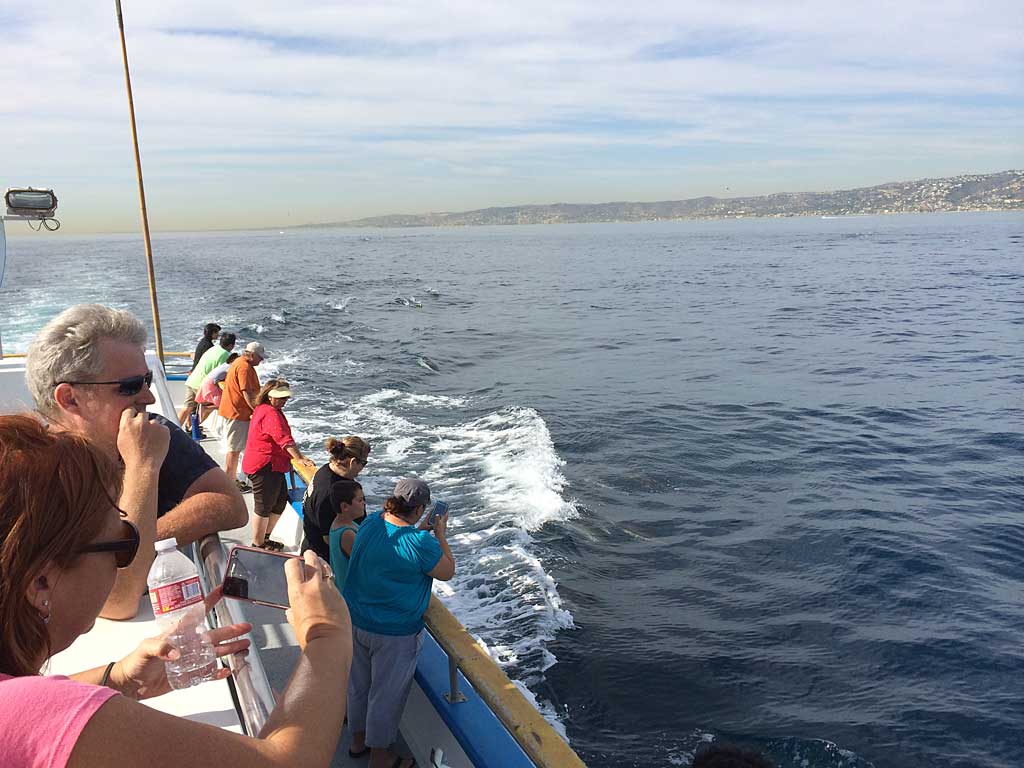 Returning to the competition venue about 4:30pm, attention turned to the meats. Harry and Donna had trimmed their meats and mixed their rubs and injections at home, so both proceeded directly to injecting some of their entries and storing them in a cold box. A buffet dinner was served to teams at 5:00pm and we all headed over for that.

We hung out until about 9:00pm then headed back to our hotel. I left Julie at the hotel and returned at midnight to watch Harry fire the WSMs and get his brisket and pork butts into the cookers. Then it was back to the hotel to get some rest. 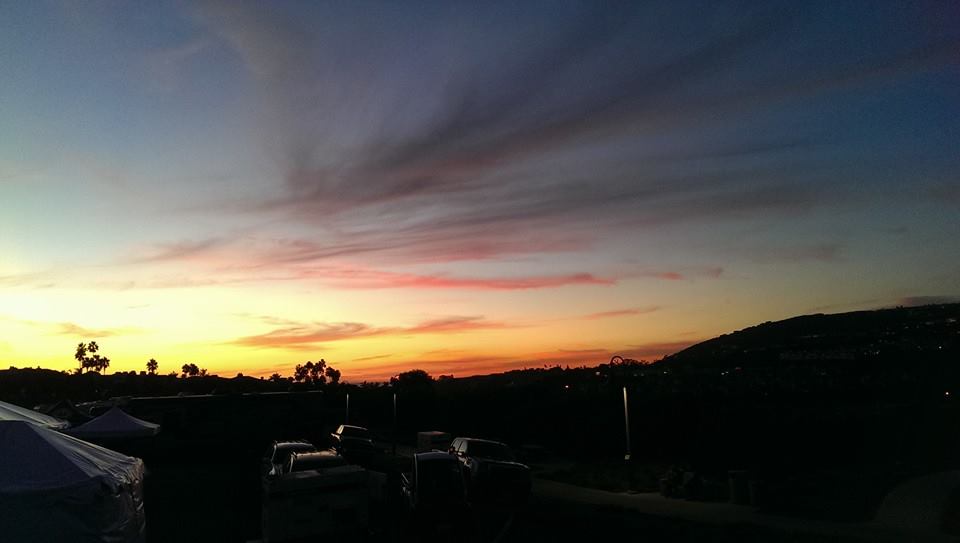 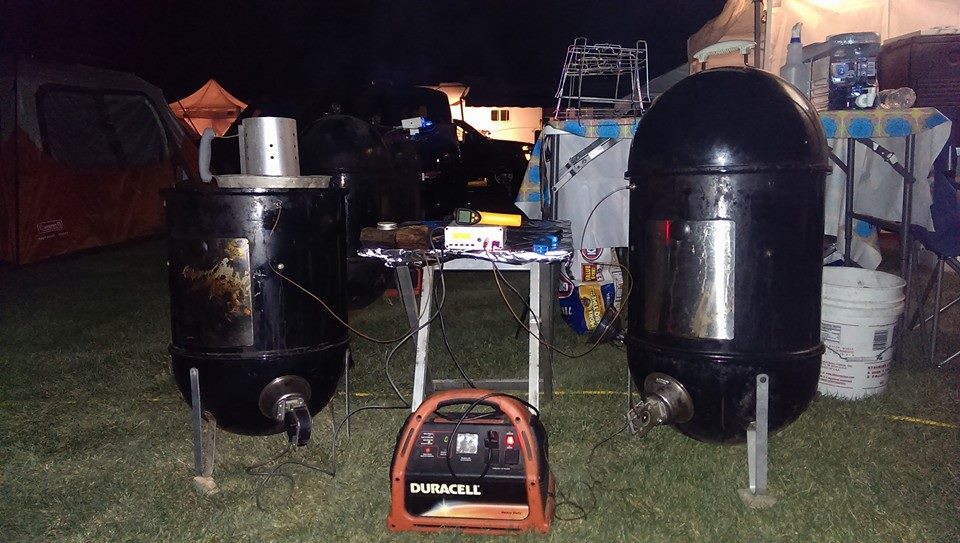 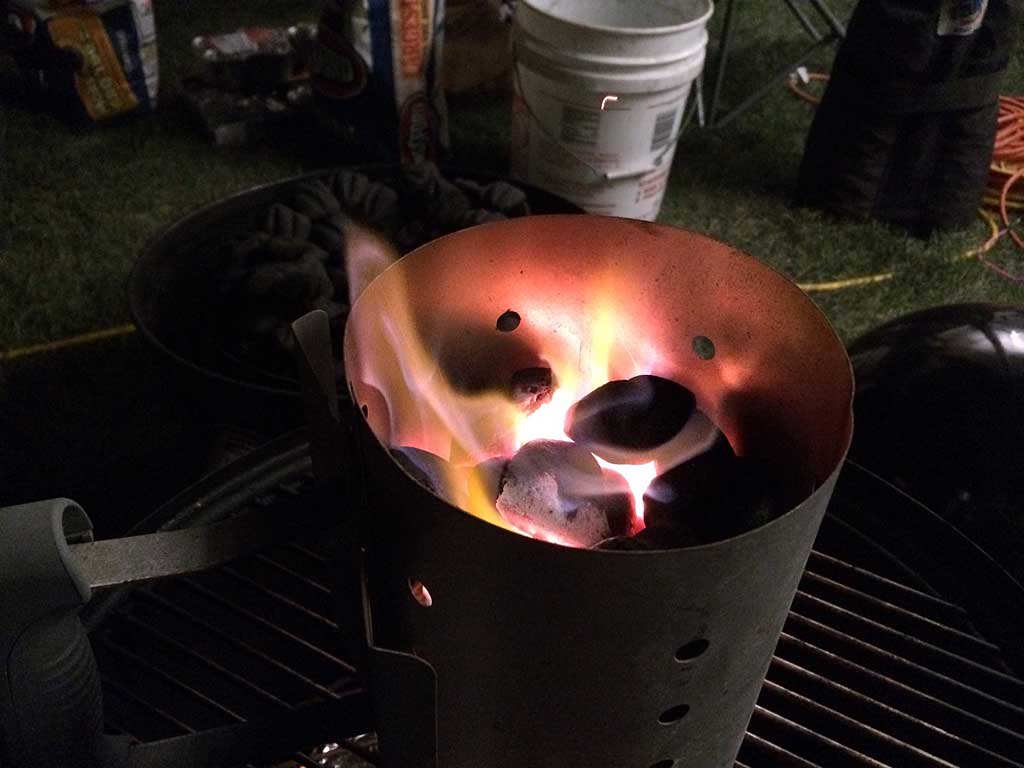 Staff member
The next morning we headed back to the competition venue and the pace of things really picked up. Briskets and pork butts were resting in Cambros and ribs and chicken were going into the pits. Then things really became a blur of activity...Amy and Miranda were creating turn-in boxes, Harry and Donna were slicing meat and arranging them in boxes, I was holding chunks of meat while Harry was slicing. Julie and I ran boxes to the judge's tent, we washed pans and utensils, we cleaned work surfaces, and so much more. Harry entered a dessert and had me torching brown sugar on pineapple slices while he was cutting yellow cake into rounds and assembling a sort of pineapple upside down cake. Believe it or not, he used a cake given to him by a co-worker, left over from his birthday just a few days earlier! 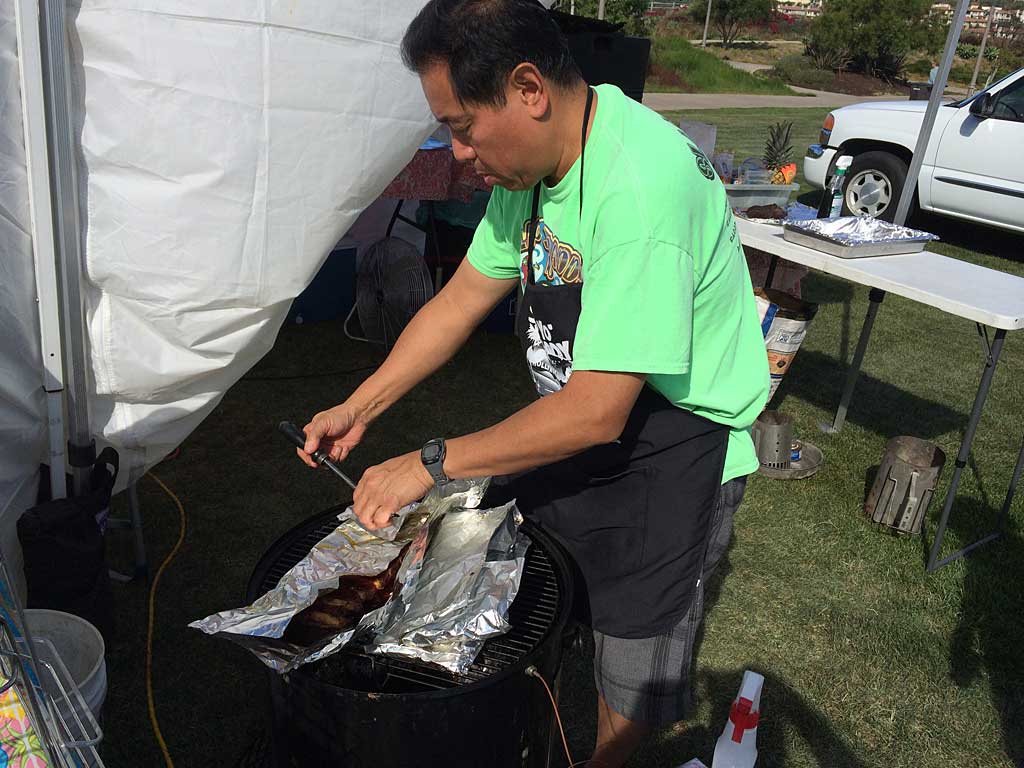 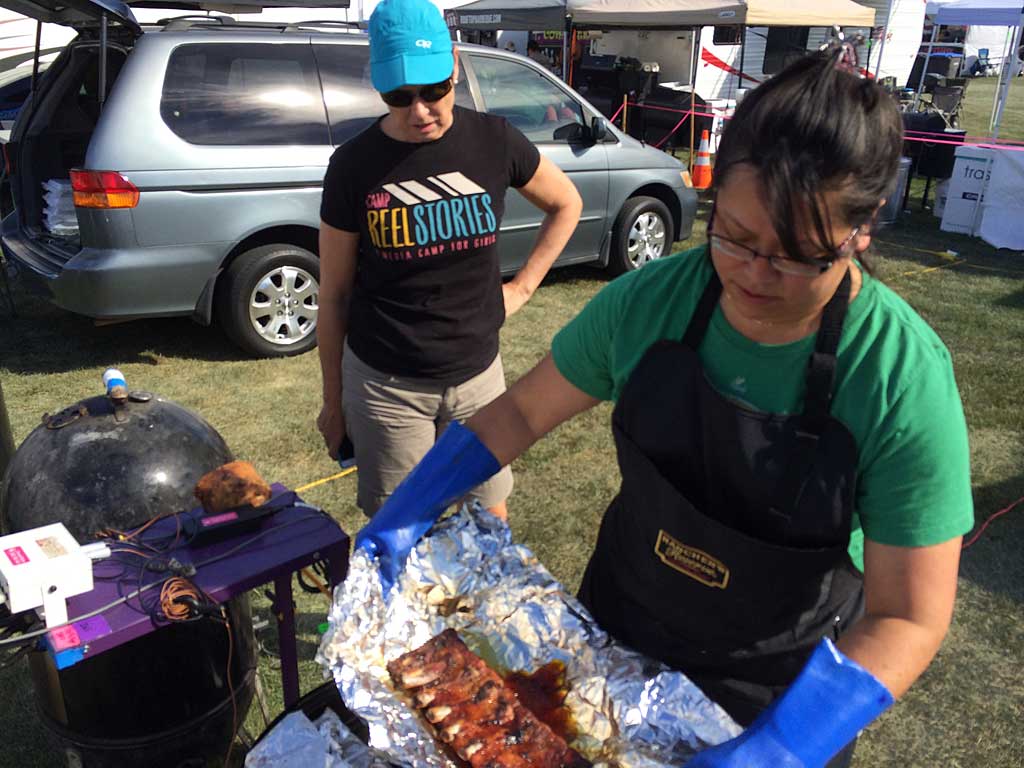 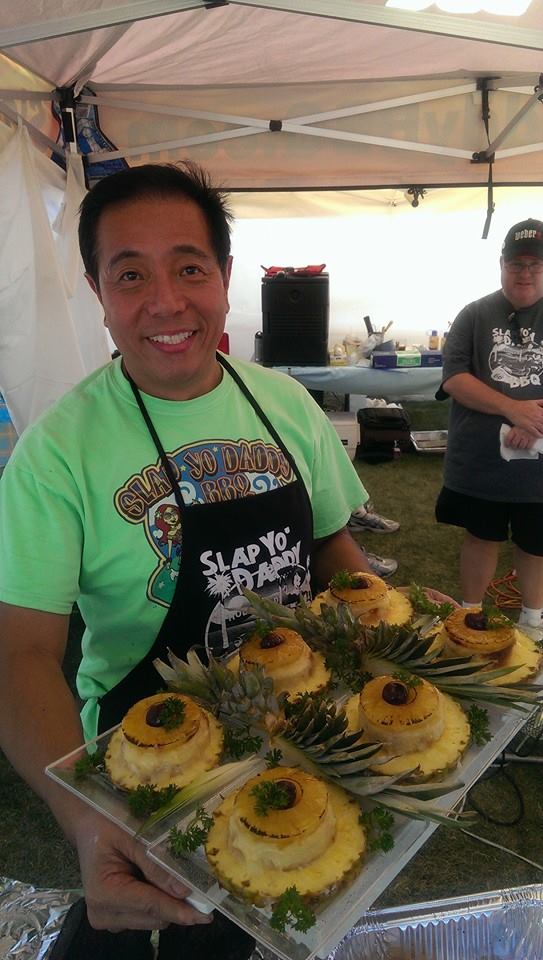 Once all the entries were in, there was little time to rest. It was time to clean, clean, clean. I wrapped water pans in foil in preparation for next week's contest. We broke down equipment and stuffed it into Harry's minivan until it could take no more. 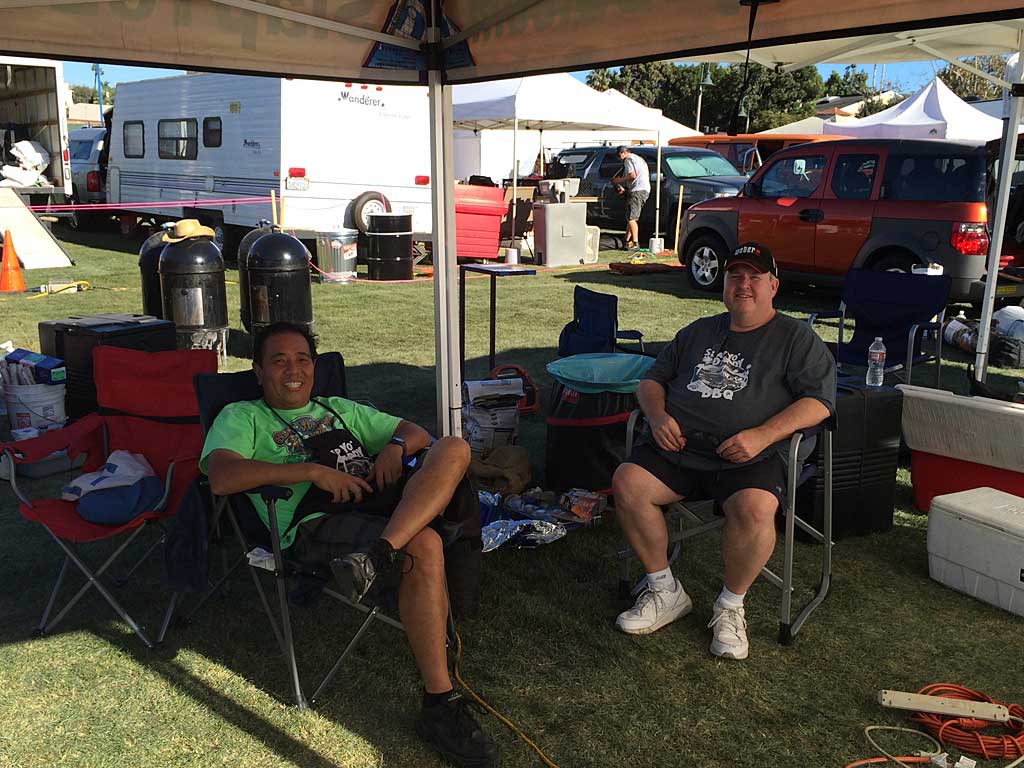 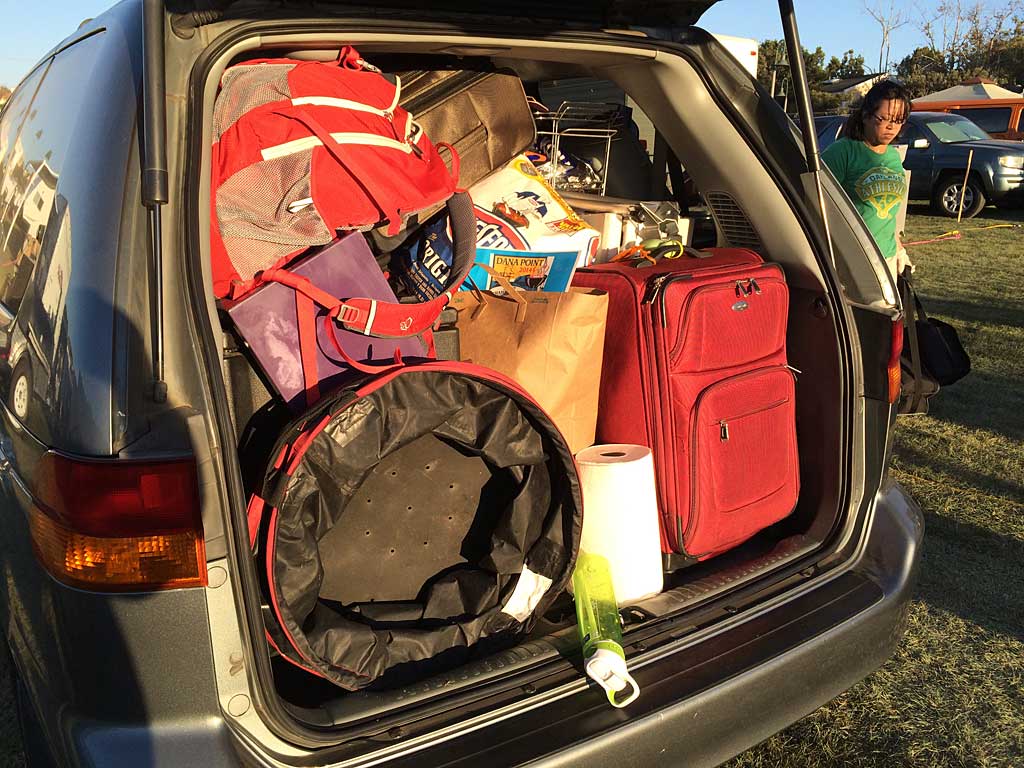 The day concluded with the awards ceremony. Butchers Daughter (Donna's team) finished in 16th place overall, while Slap Yo' Daddy (Harry's team) finished 26th. So yes, the girls beat the boys at Dana Point! Harry got a call in the Dessert Category (6th place) as did Donna (7th place for Miranda's lemon curd cheesecake). 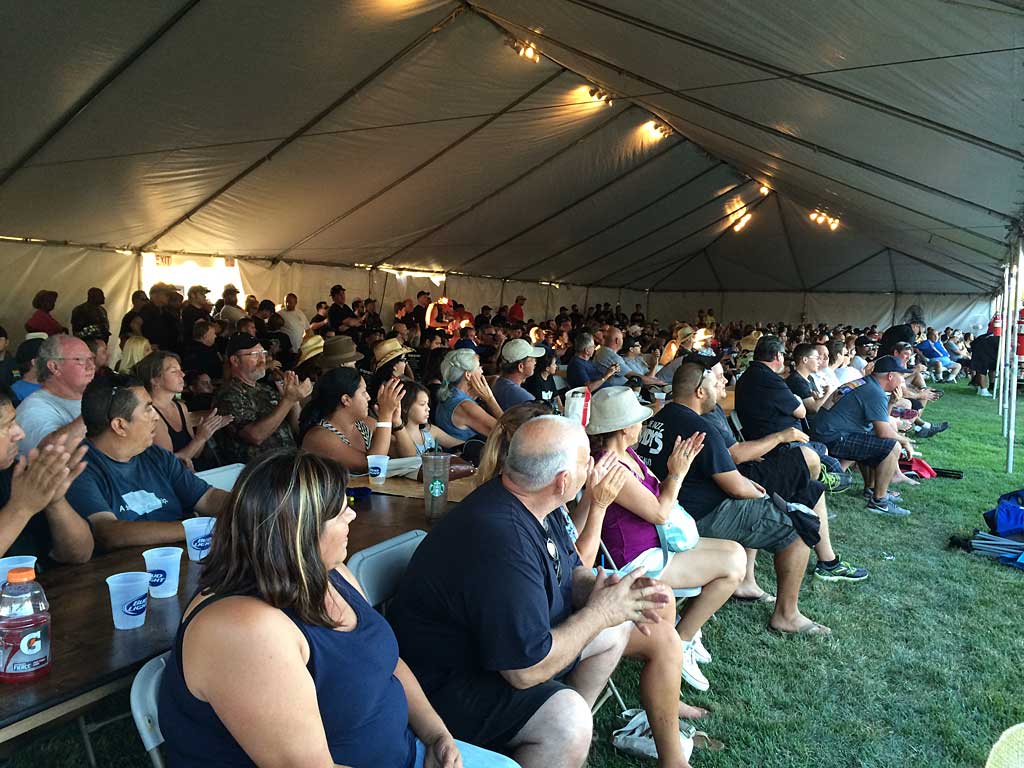 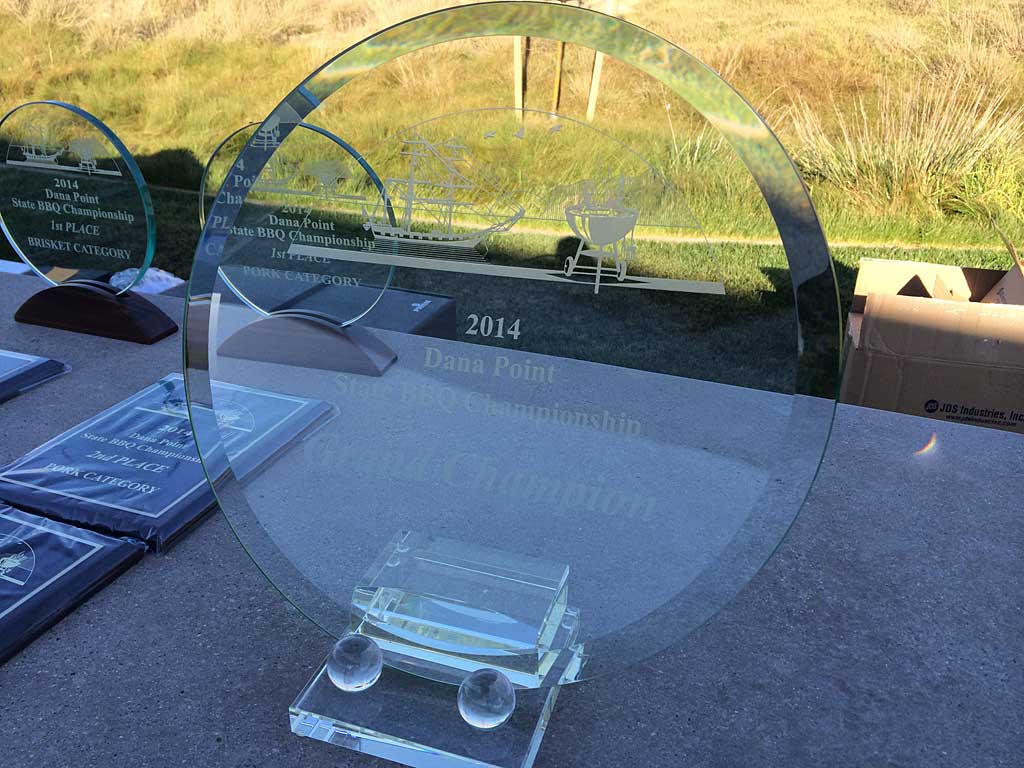 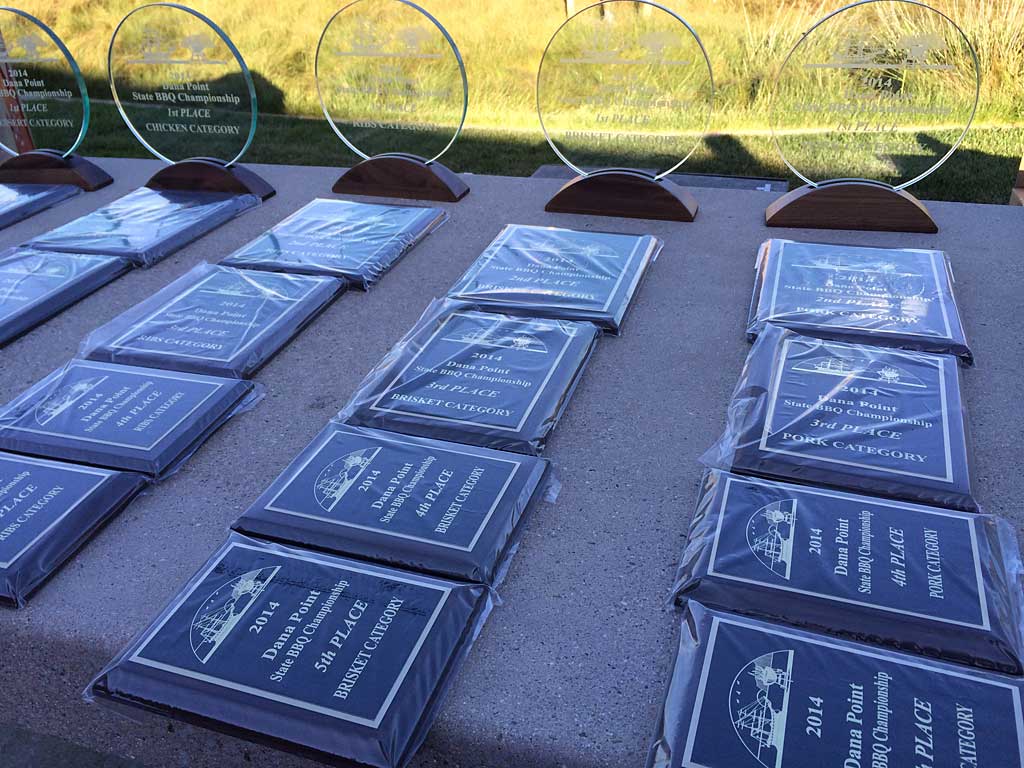 We were exhausted by the end of the day, but we had a blast. It was a great opportunity for us to see first-hand what goes into competition barbecue, and I can't thank Harry and Donna enough for inviting us to be a part of it. It also covers the "cook with a team" requirement for KCBS Master Certified BBQ Judge status, so that's a good thing. too.