Kyle in Woodstock said:
I'm sure he looked at the inside of the hood and thought there was "chipping paint".
Click to expand...

That is very common.
C

I got the grill registered on Weber.com
I initially tried to enter 2009 as purchase year, but it gave me an error message saying purchase date cannot be before manufacturer date, so I assume this grill is a 2010 model.

Kyle: Check your serial number. The first two letters should correspond to a set on this list:

Makes perfect since with it being an AD serial number


Bruce said:
Kyle: Check your serial number. The first two letters should correspond to a set on this list:

I got it cleaned up, put together and on the top deck! All ready to grill some burgers tomorrow for the game!

I ended up swapping the hood out from my other Genesis since I already went through the pain of scrapping the inside of the hood clean. The colored hood with stainless doors is different. Looks cool, but I haven't decided if I will keep it this was or swap the stainless steel hood back on. Wife already said she wants the SS hood. 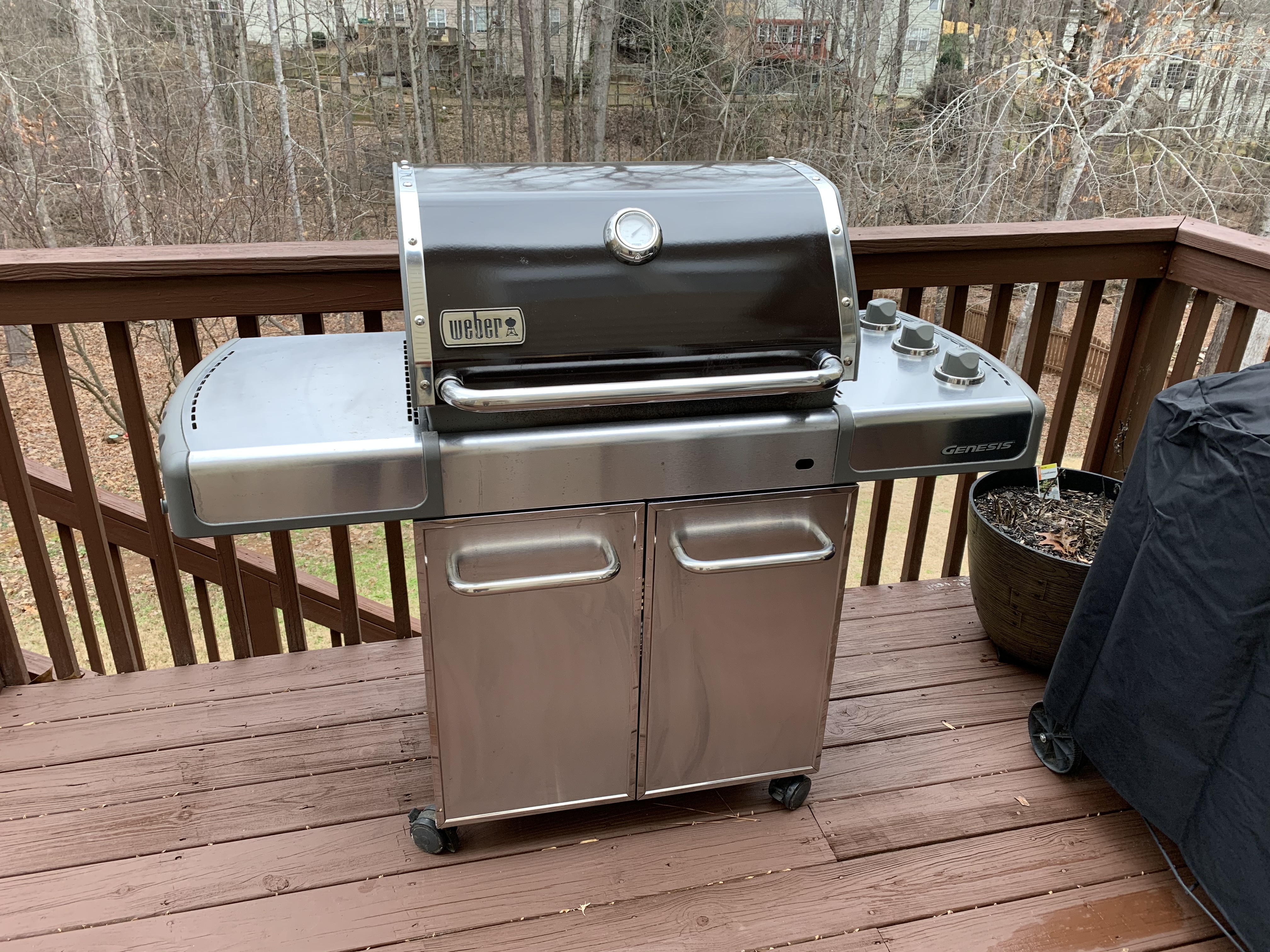 For the cook box, I just used a putty knife and a grill brush to scrap out any loose junk, then used the shop vac to clean out the dust. I don't think I will be grinding down the inside of this one since I'll be using it anyways. After scrapping and vacuuming it I sprayed it with a coating of Pam cooking spray. 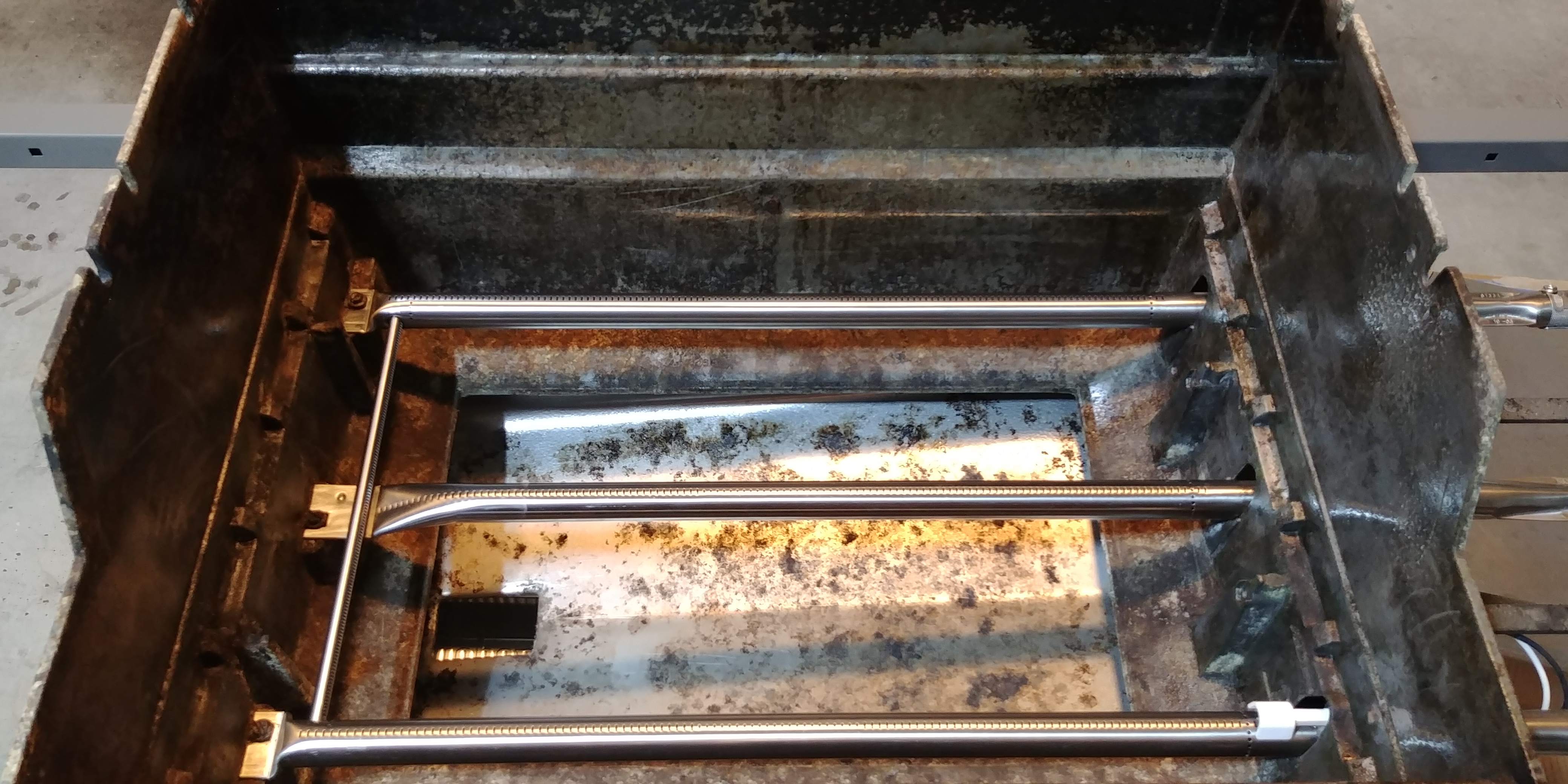 Since I had already purchased new flavor bars from that rcplanerguy on EBay, I dropped those into this grill. I also put in the Amazon Warehouse "Like New" stainless steel grates. Both fit like a charm. And even though the burner tubes on this one work and look fine, I installed the new burner tube set that Weber sent me for my other older grill. I figured since this is my keeper I'll put the good stuff on it and keep the other used parts for future projects. Also installed the new ignitor on this grill too, turns out it was same part as my old grill. This new one is a 2010 and my other is a 2009, so I think all the parts are interchangeable luckily for me. 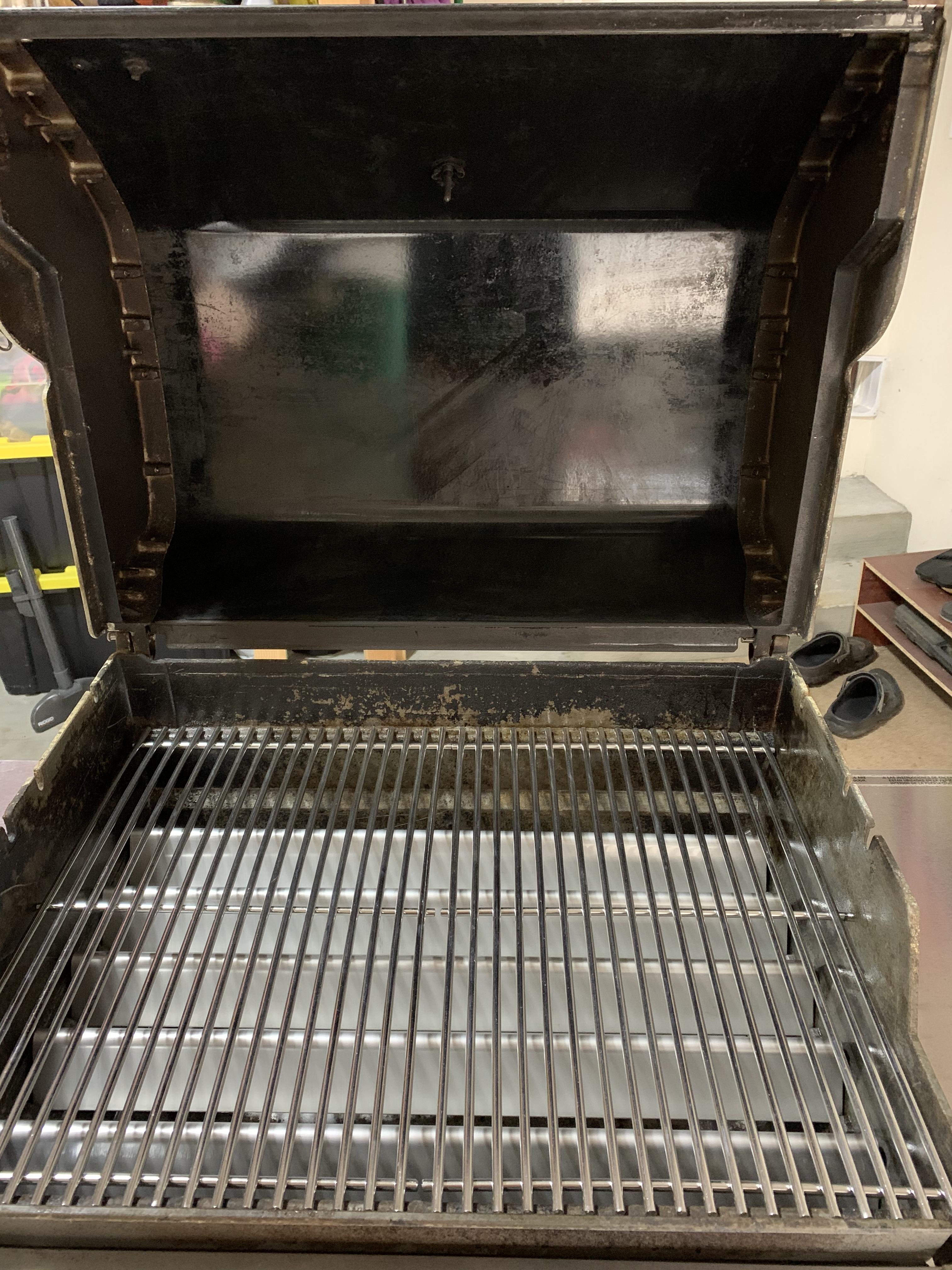 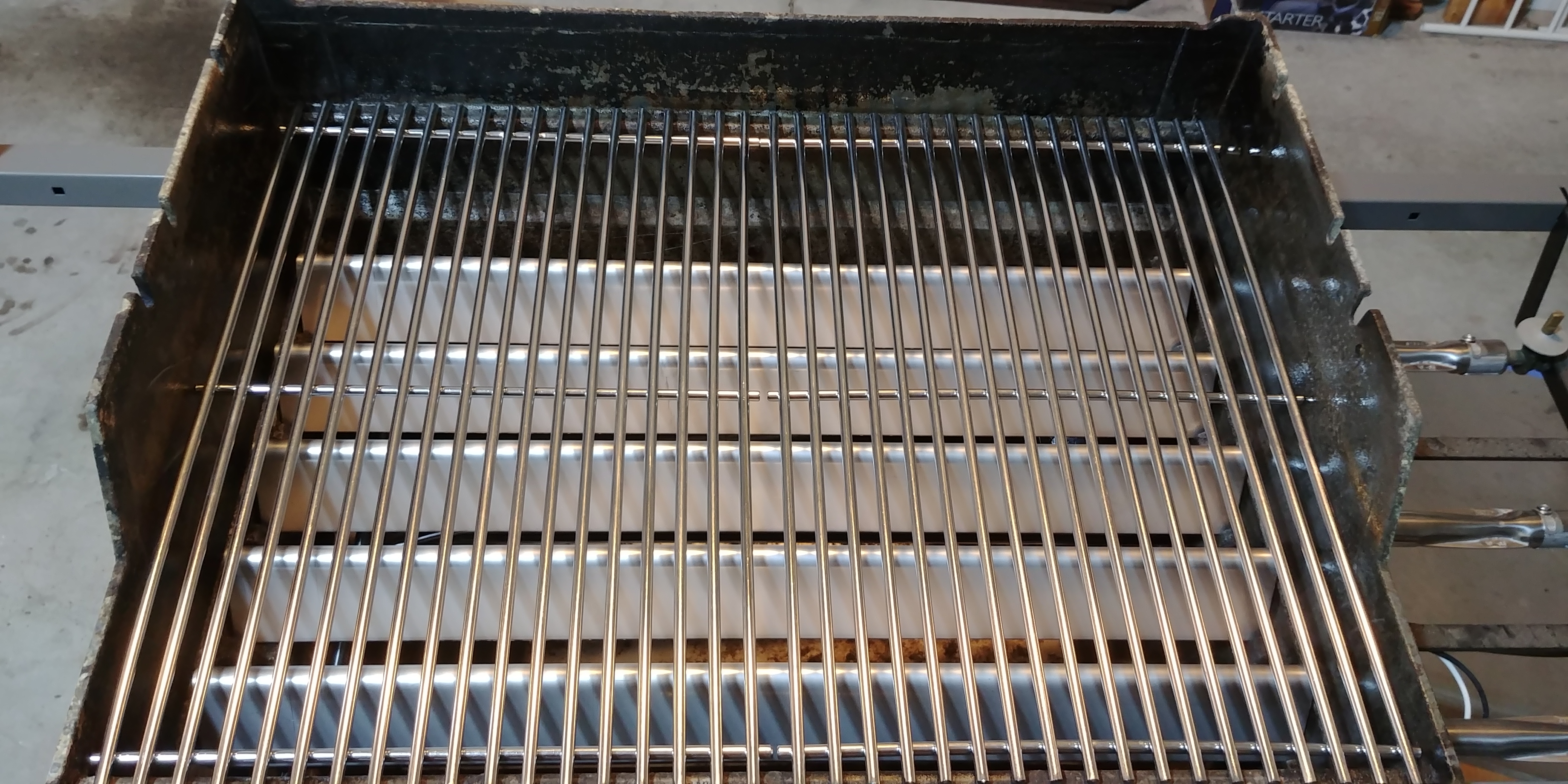 I let it run on high for 30 minutes just to burn off whatever might be in there.
After 5 minutes on high with all 3 burners going the grill was at 350 degrees. After 10 minutes it was at 450 degrees. And after 30 minutes it seemed to max out around 550 degrees. This was going off the original built in hood thermometer. 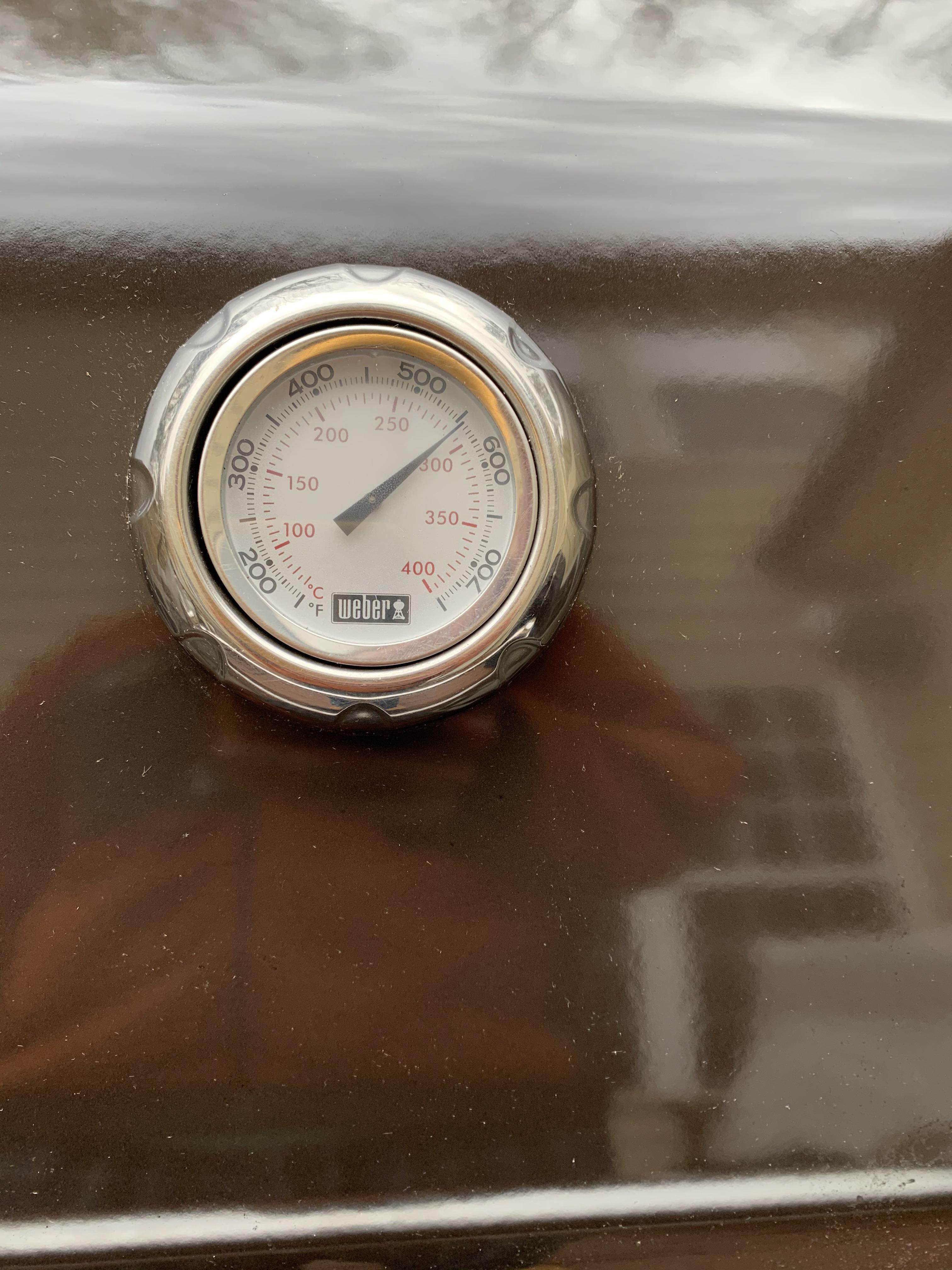 Flavor bars sitting directly above the burner tubes turned a darker color after the initial 30 min run, which was expected. 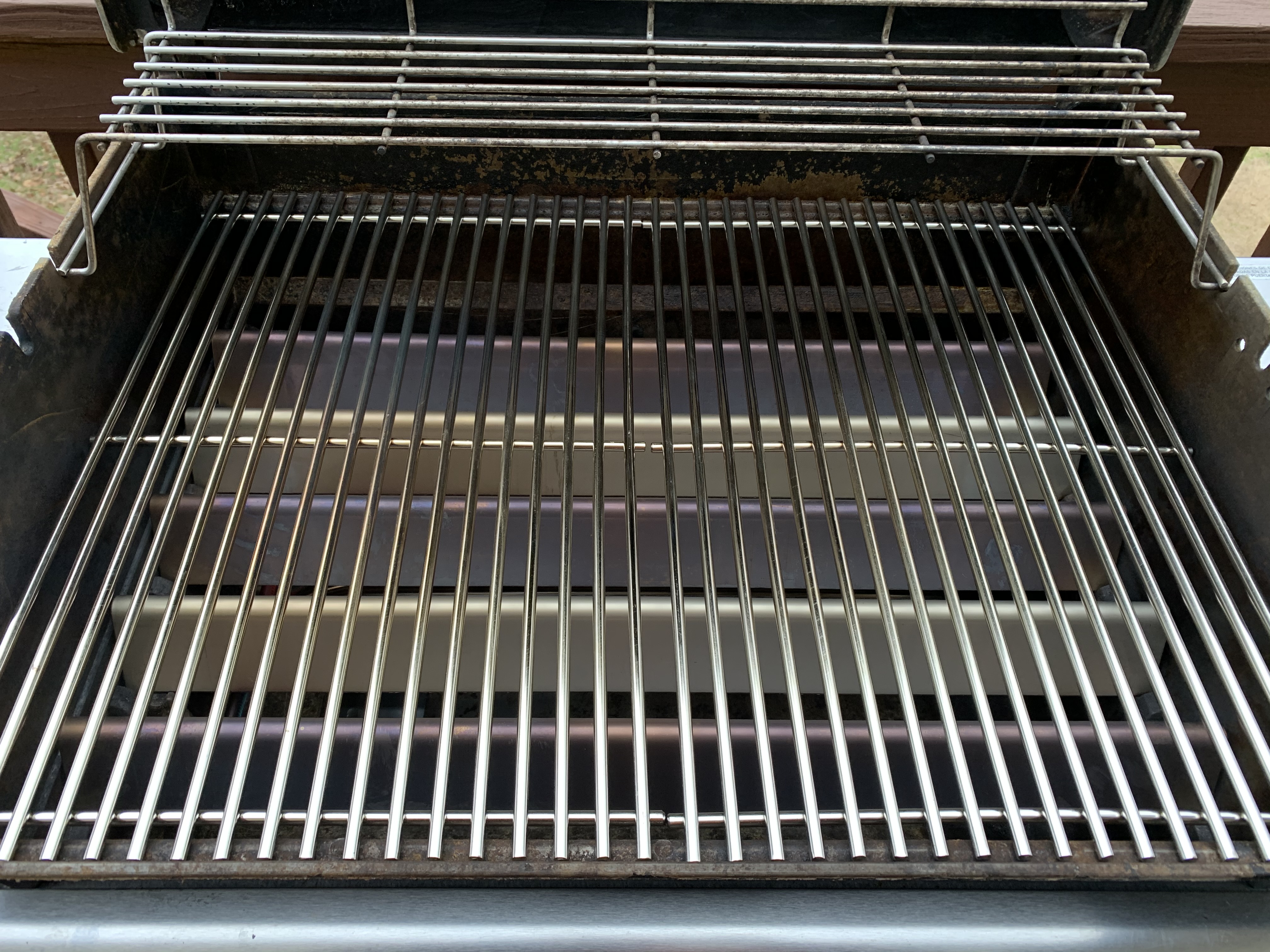 Very happy with this grill. I got really lucky picking this up for free. So I guess Karma did a full circle after I way over-paid for a rusty E-310 back in December.

In case anyone searches this post in the future, I originally purchased an E-310 a couple of months ago. It was / is in pretty rough shape. I planned to rehab it, and still will one day during the warmer months.
There is a separate post about it here:
https://tvwbb.com/showthread.php?79...-rehab-advice-appreciated-Weber-Genesis-E-310
D

Kyle:
Lookin' good. Hope the game is as good as the burgers will be!

Yah, good approach to the rehab. For a self rehab, there is no reason to clean the fire box down to shiny aluminum. I think maybe the SS hood would look better, but it is probably just because I am not used to seeing the black hood on an all SS grill. If I owned it, it would look totally normal and fine to me after a month of using it and seeing it in that configuration.
B

Kyle fantastic job and it all worked out, with Bruce and your wife like the stainless lid better.

Kyle,
It all worked out for good! A really nice grill, one of the last real Weber's in my opinion since it still has the classic E-W burners with crossover ignition.

My vote is that you keep the hood and put on the black doors instead!

Looks like you knitted yourself a very nice grilling machine
B

Jon Tofte said:
Kyle,
It all worked out for good! A really nice grill, one of the last real Weber's in my opinion since it still has the classic E-W burners with crossover ignition.

My vote is that you keep the hood and put on the black doors instead!

That would look good also Jon but his wife already said she liked the SS hood, if anything I have learned over the years you can bank those points for another time. Of course about a year ago or so I passed on a 5000 in near perfect condition it was nat gas so would have needed another manifold but I showed her a picture it had that Grey Lid with the maroon or whatever stripes at the bottom she thought it was ugly. I loved it but since she uses the gasser the most really her grill I could just envision every time she cooked on it in her mind saying this is ugly. The redhead not so much.

Do you guys know if the doors from the front control Genesis are same size as the sidewinder?