Usually when I decide to smoke a brisket I put in an order at my local butcher (Real Deal Meats for any Edmontonian) a few days in advance and pick it up the morning I am smoking it. This summer I had the plan but life happened and the brisket landed in the freezer. Feeling a "hankering" for some BBQ and some brisket chili in the near future I took the brisket out of the freezer and into a cooler of cold water for the night. When I checked on it today I noticed that there were some holes in the shrink wrap and water was getting in. I did not want the brisket sitting directly in the water or exposed to air pockets so I decided to trim it up now, season it with salt and pepper and leave it in the fridge till I smoke it later on this evening.

I have watched the majority of the brisket videos on YouTube and read a lot about trimming. When it comes to doing the task I have a hard time aggressively shaping and removing meat from the brisket to make it look "pretty" especially when I have to pay the price I do for a good brisket. Since this particular brisket was exposed to water for a bit the edges were a little more greyish pink then usual so I decide to remove a thin layer of meat around the edges. Once I had it nicely shaped and trimmed around all the edges to my surprise the layers of fat on the top and bottom were more exposed and a lot easier to trim down to the thickness I like. I may need to adjust the "aggressiveness" of my trimming in the future.

By the way it was very "pretty" as well LOL. 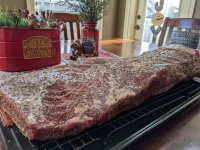 Nice job Chris. Did you happen to weigh what you cut off? I always likely keep track of the waste/dollars I'm throwing away.IIRC, I took almost two pounds of fat from the last brisket I did. Anyhow, I hope you enjoyed the fruit of your efforts.

I have no issue with aggressive trimming. It never goes to waste… chili, sausage, burgers….

I love the aesthetic of an aggressive trim and shaping of the brisket. I'm not sure there's much difference in taste. I opt for minimal trims now.
J

Matthew Turner said:
I love the aesthetic of an aggressive trim and shaping of the brisket. I'm not sure there's much difference in taste. I opt for minimal trims now.
Click to expand...

I do as well. I think some of the trimming practices have been popularized by restaurant or competition cooks who are looking to plate a presentable product. For me, I like to have a fat cap dripping down throughout the cook. If someone in the house doesn't want to eat that part, they just cut it off. They don't get to ding me on Yelp. I try to cut away what is accessible and will end up as inedible, but I leave lots of fat.
You must log in or register to reply here.
Share:
Facebook Twitter Reddit Pinterest Tumblr WhatsApp Email Share Link
Top