Staff member
"That's a wrap for King of the Smoker."

And with those words, Sterling Ball of Big Poppa Smokers, having given out the last of the over-sized award checks, closed the 7th and final edition of the Smithfield King of the Smoker, an invitational BBQ contest held each year in the desert communities of La Quinta/Indian Wells about 130 miles east of Los Angeles.

KOS, as it's known, is a unique contest for several reasons. First and most important, 100% of the proceeds from this event go to the Casey Lee Ball Foundation for Pediatric Kidney Research. Second, 24 of the best teams in the U.S. compete by invitation only for over $75,000 in prize money. Third, it's an "old school" contest:

The event was held at the Miramonte Resort in Indian Wells and the public could buy entry tickets for just $10. That fee entitled them to wander the grounds, hob-nob with the teams, and attend all of the instructional sessions. For an additional $12, visitors could buy a BBQ plate lunch prepared by some of California's best competition pitmasters. Dessert, beer, wine, flavored ice teas, and face painting for the kids were available at additional cost.

If you follow KCBS competition barbecue, you know some of these are multiple winners of the American Royal and Jack Daniels competitions, of World BBQ Championships, and are successful restaurateurs, BBQ instructors, television personalities, and cookbook authors.

So needless to say, it was a real honor for me to be invited to judge KOS for the first time at the final, final event. We tasted some excellent barbecue! Since it's blind judging, I have no idea whose entries I sampled, but it was cool knowing that I was going to taste something made by Chris Lilly of Big Bob Gibson's Bar-B-Q and something by Tuffy Stone of Cool Smoke and something from Darren Warth of Smokey D's BBQ and something from Johnny Trigg of Smokin' Triggers.

Congratulations to Grand Champion Gettin' Basted and Reserve Grand Champion One2BBQ and to all the other teams that walked. Great event, great fun, great cause, great 7 year run!

Here are a few photos...you can see all 60 photos in this album. Enjoy! 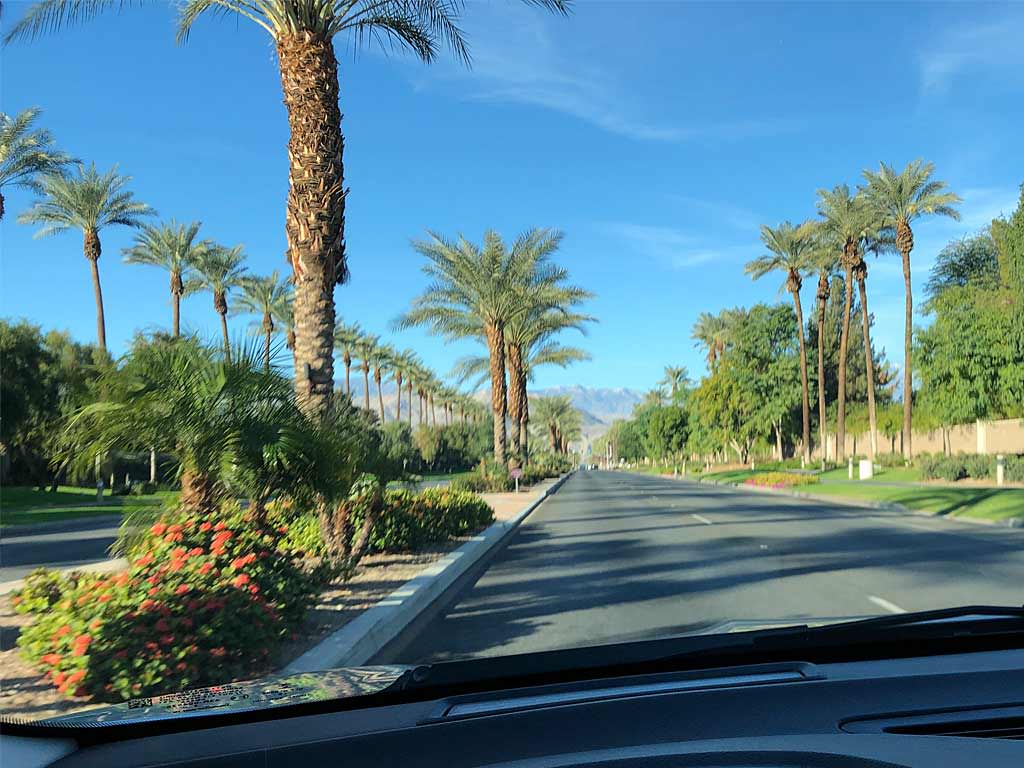 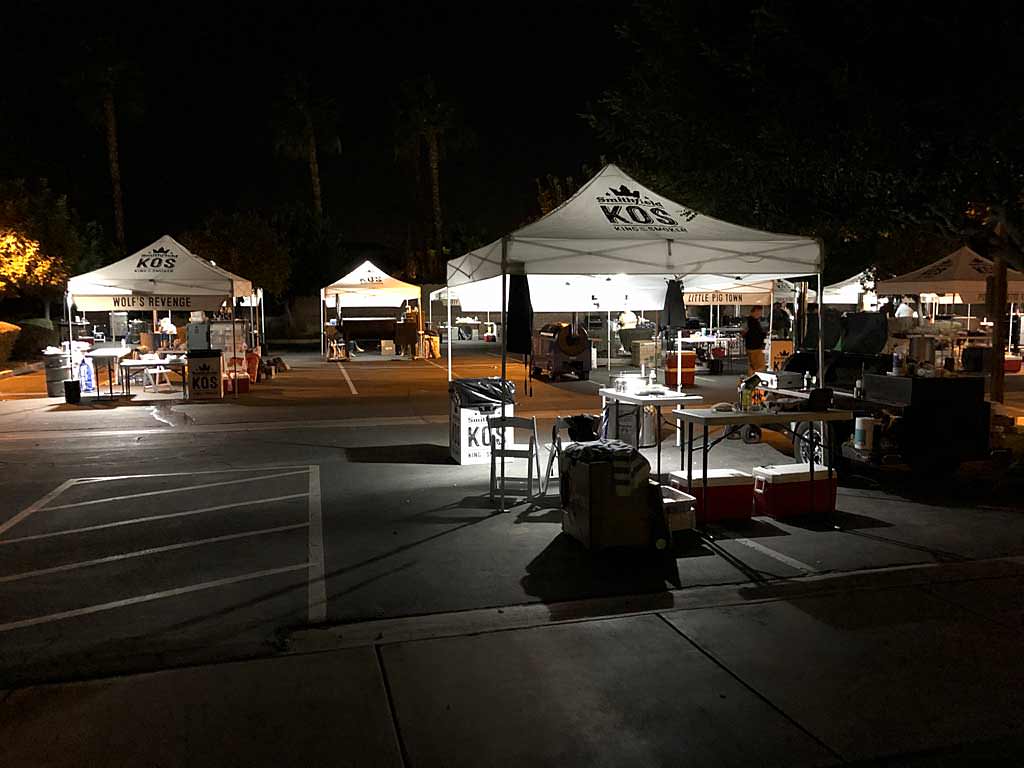 Friday Night: Teams are set to begin cooking. First turn-in is chicken at 11:00am Saturday morning. 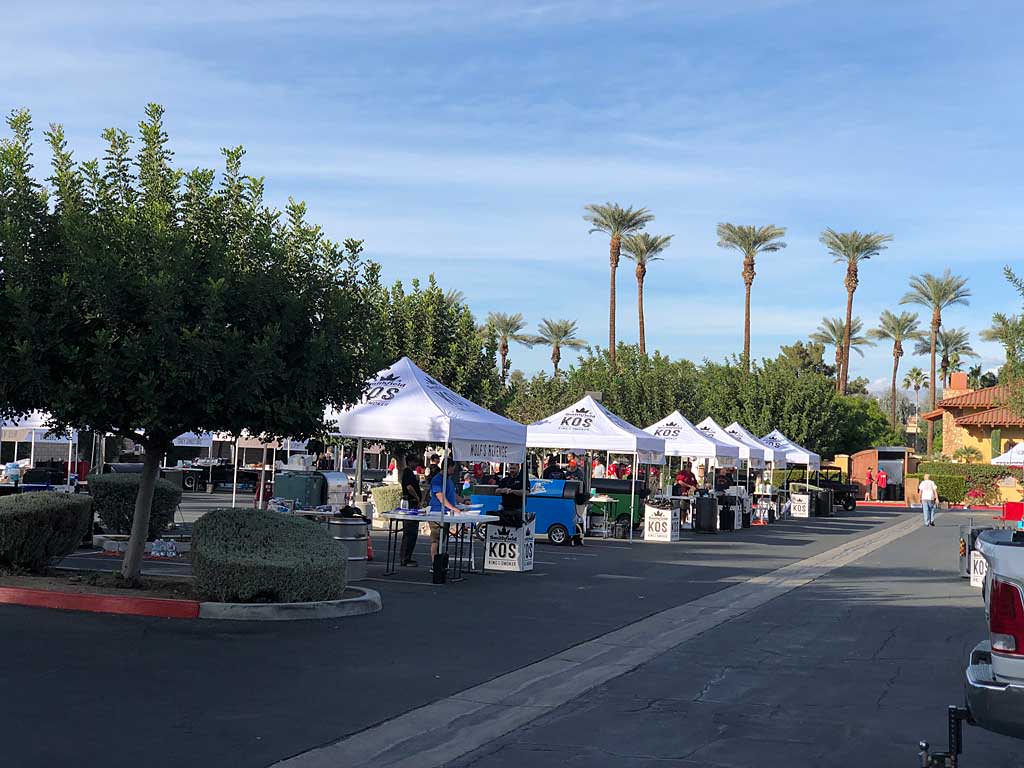 After the last turn-in of brisket at 12:30pm, the teams start to clean-up, pack-up, and prepare for the award ceremony at 5pm. 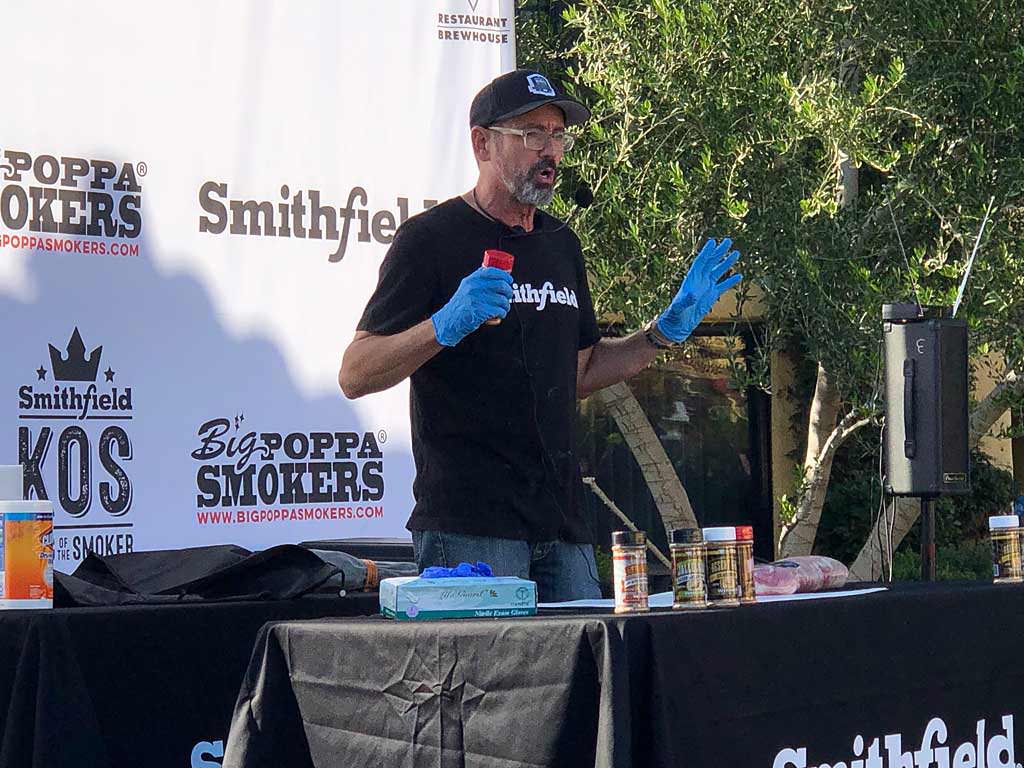 Tuffy Stone of Cool Smoke does a demo on how to trim pork loin four ways. 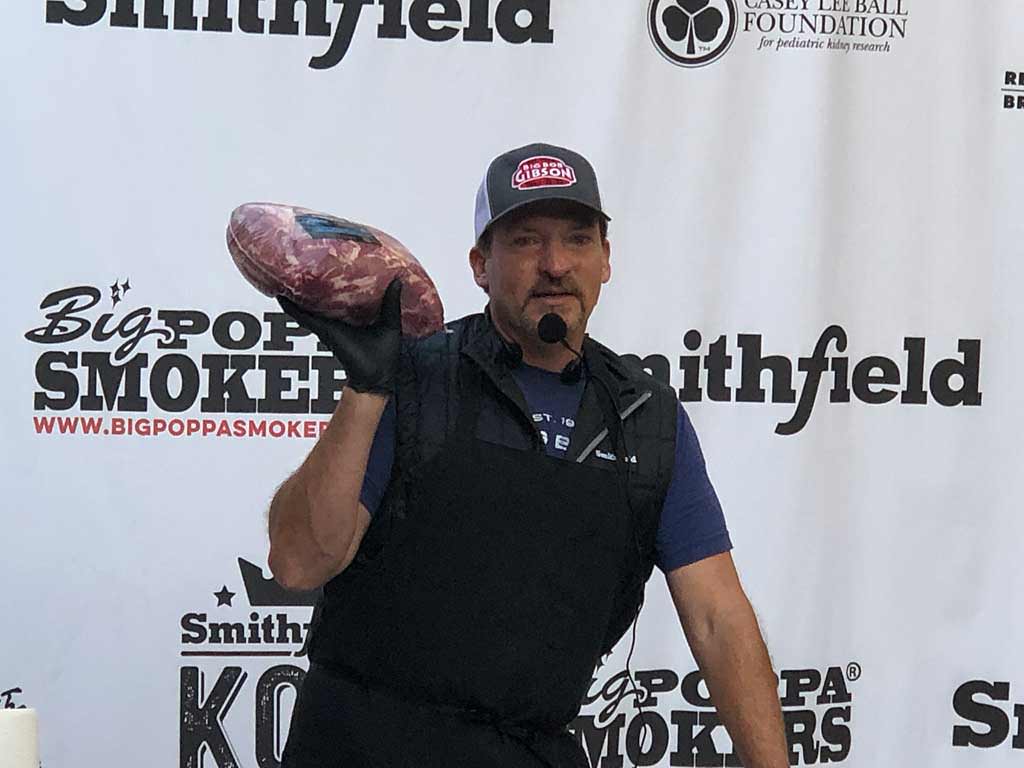 Chris Lilly of Big Bob Gibson's Bar-B-Q does a demo on how to trip pork butt for competition. 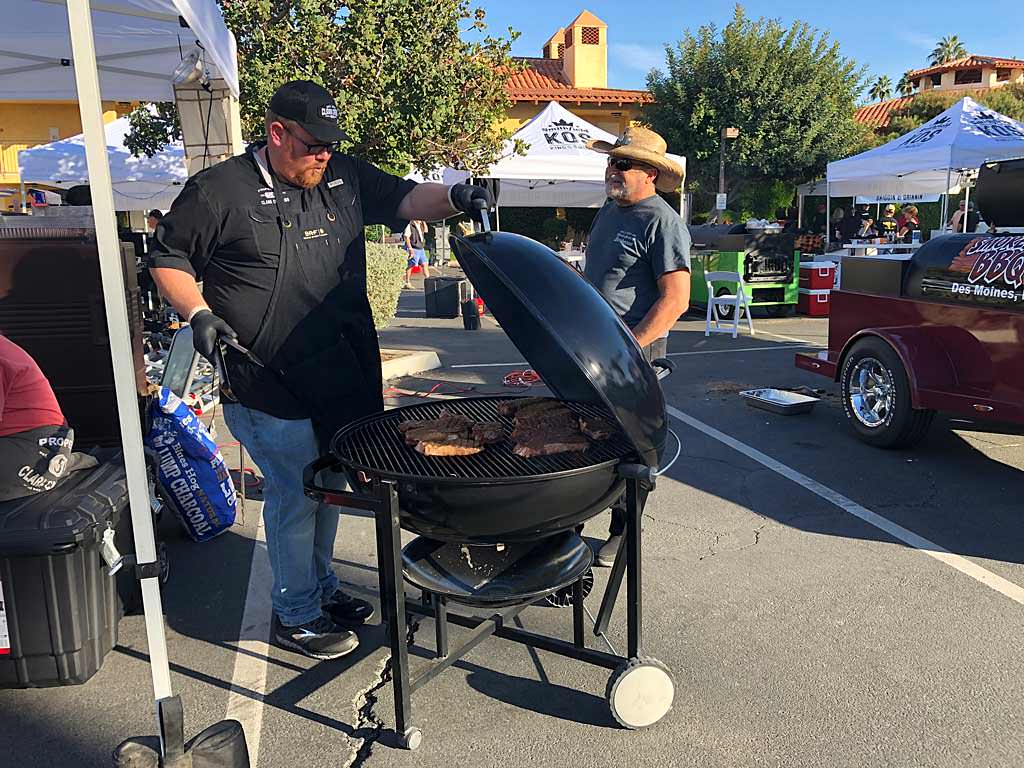 Travis Clark of Clark Crew BBQ cooks some steaks in preparation for his demo on grilling strip loin steaks. His Ranch Kettle was the only Weber grill at KOS! 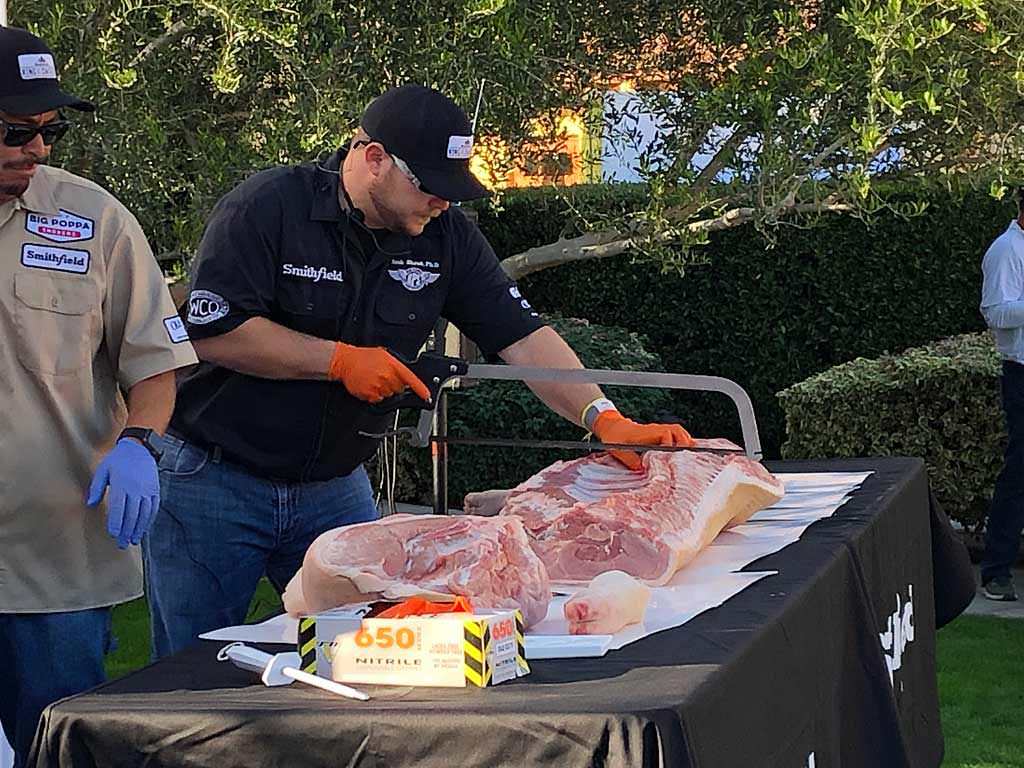 Josh Shook from Smithfield demonstrates how to break-down a side of pork into consumer cuts of meat. 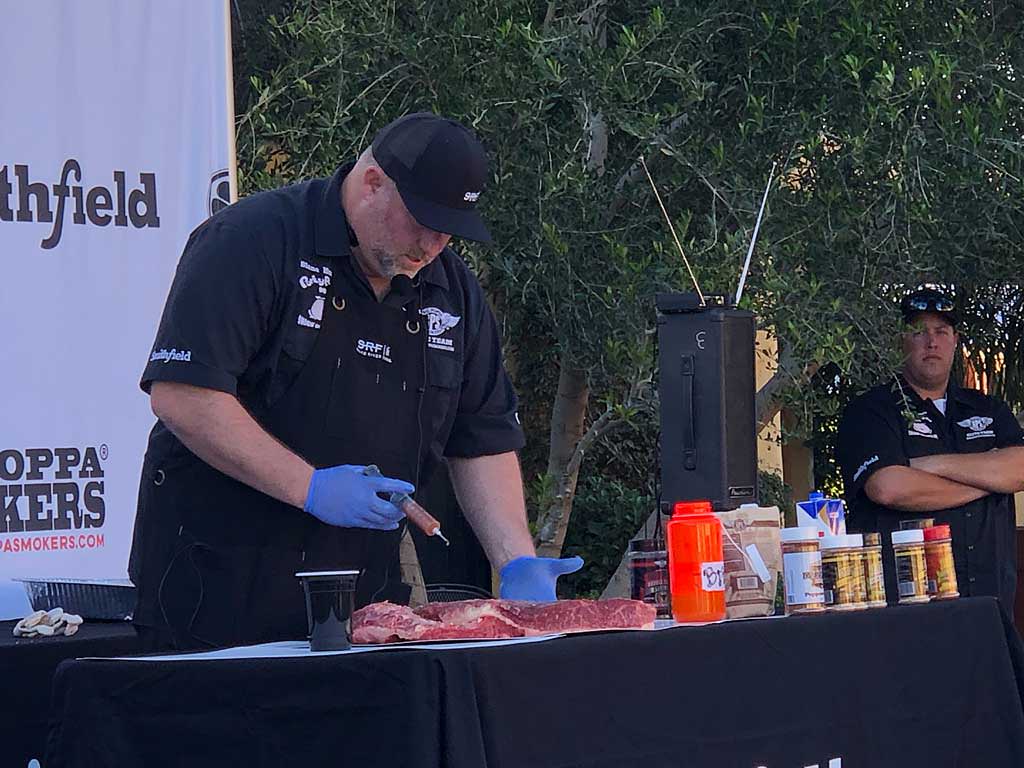 Blane Hunter from Porky Butts demonstrates how he handles Wagyu brisket for competition. 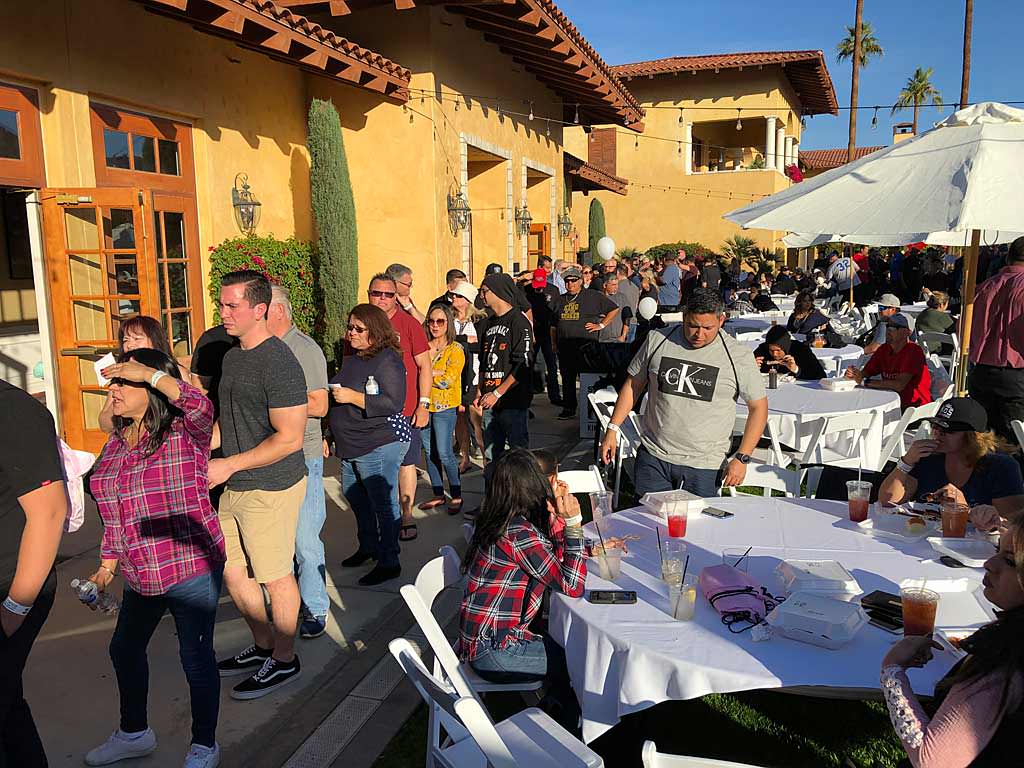 The line for lunch was long, but seemed to move at a good pace. 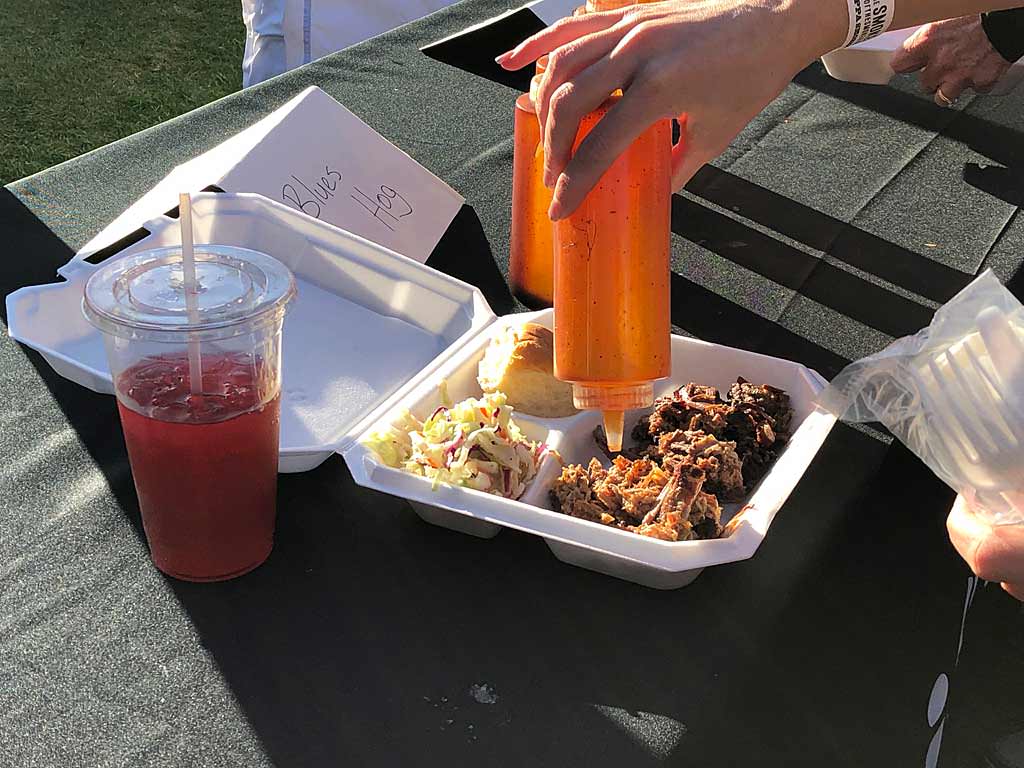 Chopped brisket, pulled pork, slaw, and a roll were enjoyed by this attendee. 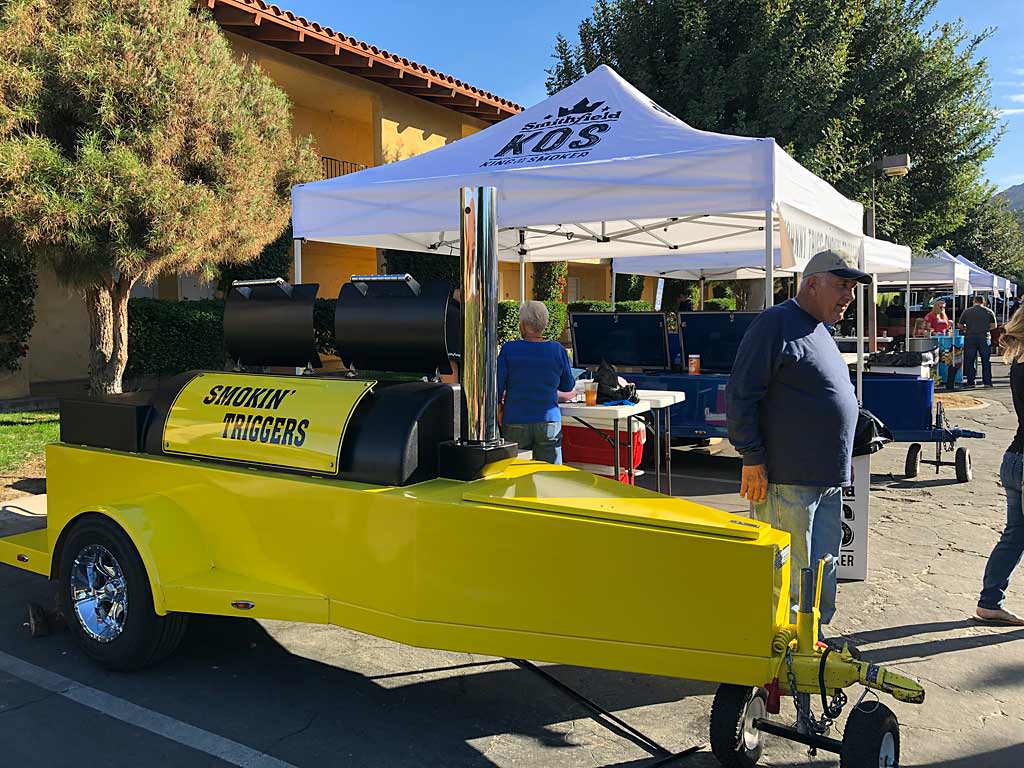 Johnny Trigg and his wife Trish were on-hand for KOS. Unfortunately, Smokin' Triggers came in last place overall. Great that they turned-out for such a great event and cause! 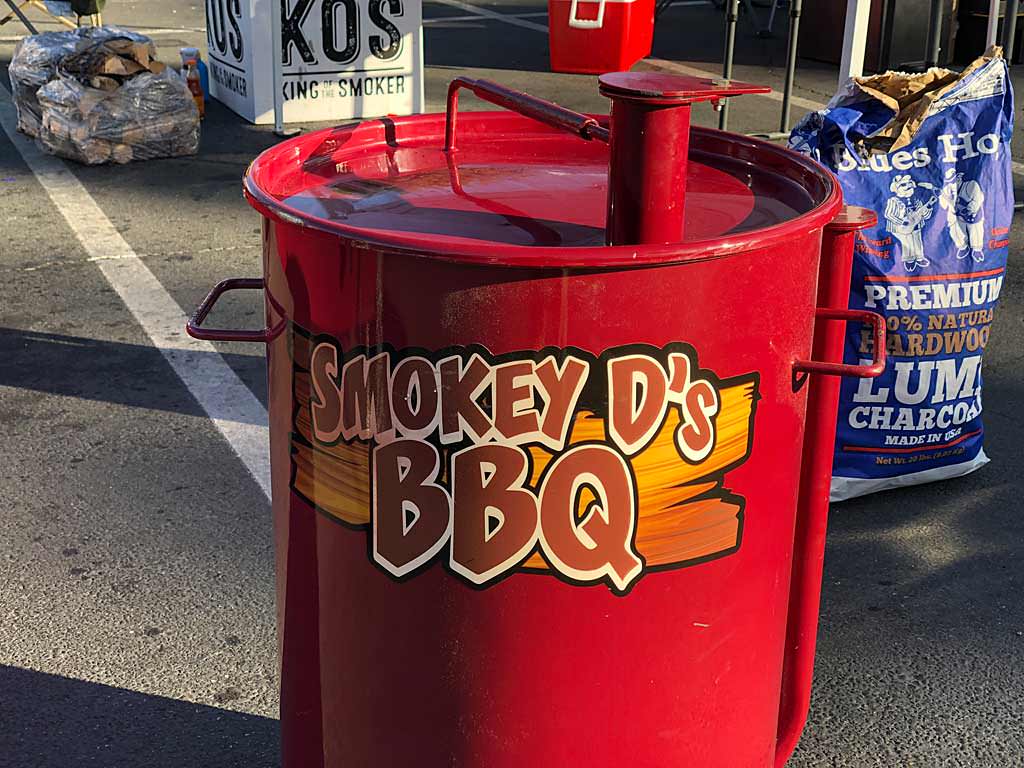 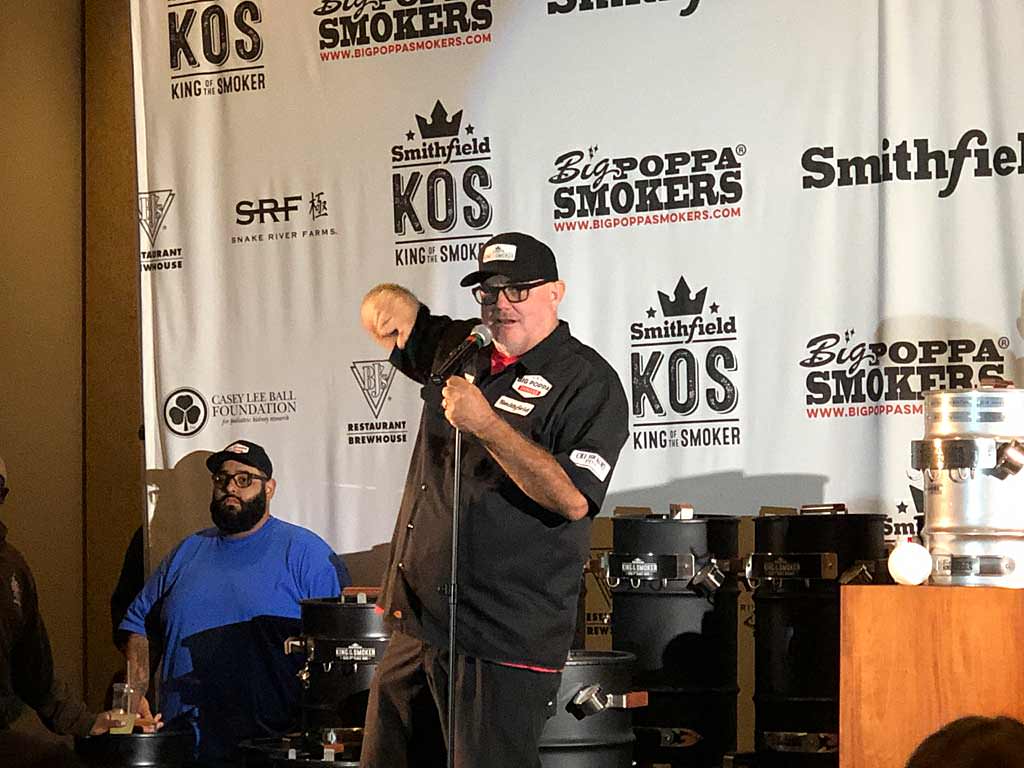 Sterling Ball takes the stage to begin the awards ceremony. 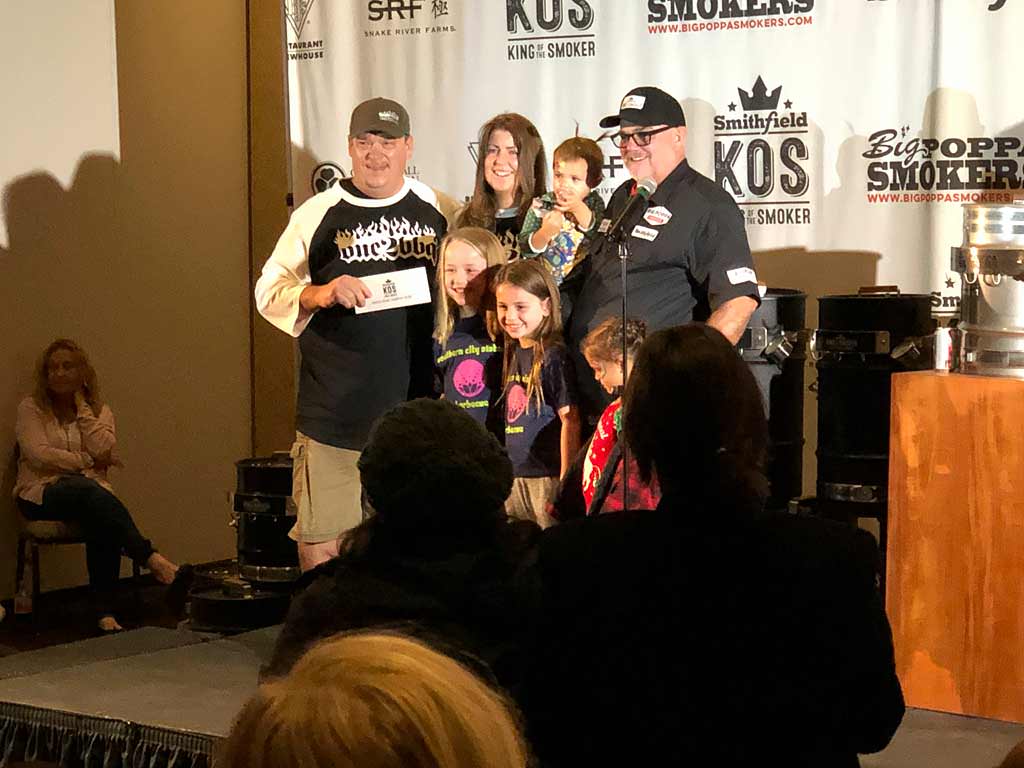 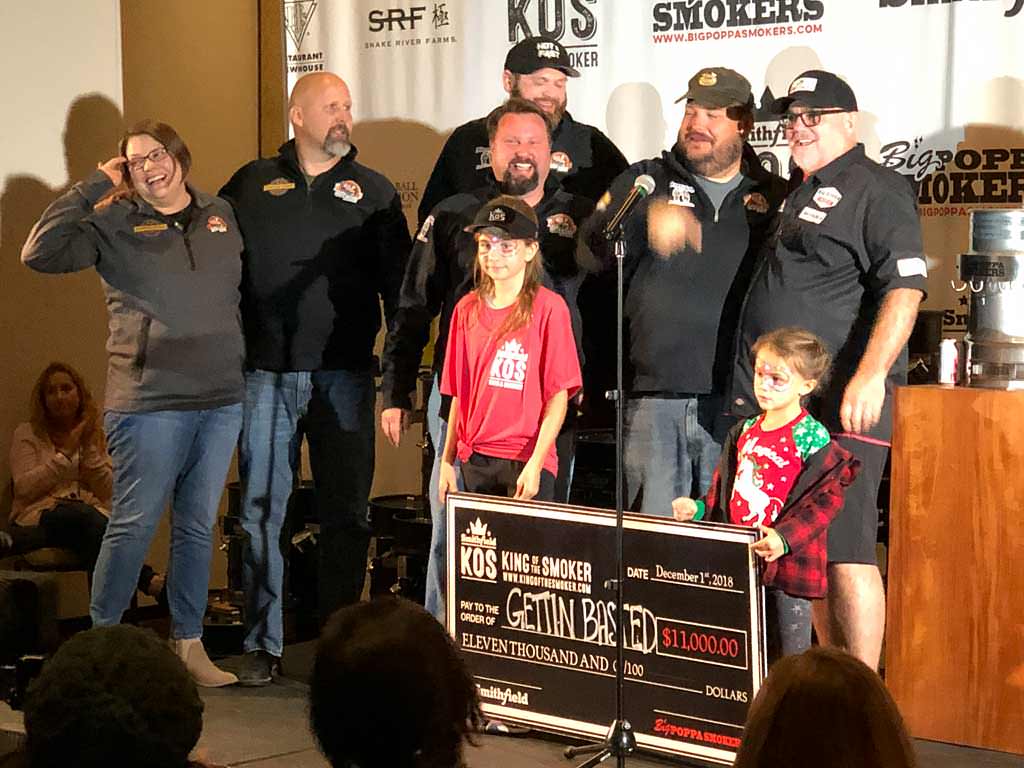 I agree, getting to judge with this list of barbecue cooks is special.

I agree, getting to judge with this list of barbecue cooks is special.

And no electricity also means no ATC's ?
Click to expand...

You are correct! The only electricity was the light source in the 10'x10' EZ-Up. They were allowed to use a Thermapen for temping meat. No ATCs, blowers, etc. No electric knives, so teams had to slice meat using regular knives. No pellet cookers. No gas or electricity to start the fire.

The Texans that visit this site, should be warned to not look at the pics

Jeff Vanderlinde is injecting a wagyu brisket. That could cause heart attacks across central Texas .

And then people paid $12 to eat competition barbecue !!

Lynn Dollar said:
Jeff Vanderlinde is injecting a wagyu brisket. That could cause heart attacks across central Texas.
Click to expand...

It seems that every competitor in a KCBS contest injects their briskets.

I'm not falling for this one. Texans love them some BBQ sauce, too. Why, even the Kreuz Market location in Bryan, TX now offers sauce! And HEB has shelves full of BBQ sauce.

I was listening to a Houston based barbecue podcast this evening , Tales From the Pits , they were discussing both injecting brisket and competition barbecue. And whether comp barbecue was good to eat. They'd just entered a compeition, said they did not do it often, and they had some thoughts.

But they did not mention sauce

Lynn Dollar said:
I was listening to a Houston based barbecue podcast this evening , Tales From the Pits , they were discussing both injecting brisket and competition barbecue. And whether comp barbecue was good to eat. They'd just entered a compeition, said they did not do it often, and they had some thoughts.

But they did not mention sauce
Click to expand...

Franklin's brisket is straight-ahead delicious. Competition brisket has amped-up flavors designed to impress a judge with *literally* a single bite. It's generally not the kind of brisket you'd want to eat a plate of.

However, Franklin's brisket, as good as it is, won't win in a KCBS competition. Watch his video for proof:

Thanks for the report Chris...Did I read it right and this was the last event to be held?

From reading other forums, I think a lot of backyard barbecue cooks inject brisket. A fella who'd just bought a pellet smoker, recently asked me if I injected brisket. The closest I've come, was a long time ago when I first bought my WSM,about 2003 or so. The fella at the meat market recommended I use an ice pick to poke holes in the fat cap, and go on down into the meat. Then douse it with worcestershire sauce.

Daniel Vaughn came to Oklahoma and visited Butcher BBQ stand. He called it competition barbecue and was not impressed. He said he did not like meat injected, something about too much salt/butter/broth. I would guess, being the Texas Monthly BBQ editor, that he focused on the brisket, which is not Butcher's thing. Pulled pork and pork spare ribs are what I like there. And I think ya gotta inject pork butt, its just too large a hunk of meat.

I doubt any of these competition cooks are serving to the public in their BBQ joints, what they would present to a judge. From what I've read and heard, that's just not practical from a lot of standpoints.

James N said:
Thanks for the report Chris...Did I read it right and this was the last event to be held?
Click to expand...

Not to be a nit picker, but the last pic in the first post is not Jeff Vanderlinde from Shiggin' and Grinnin'.

T Perkins said:
Not to be a nit picker, but the last pic in the first post is not Jeff Vanderlinde from Shiggin' and Grinnin'.
Click to expand...