What model Q is a decent for a college age kid ?

Ed, what source was it?

I do think that if you buy a new set of Weber Q grates, they come with the clips.

FYI, I don't know of any aftermarket Q grates that include the clips.

Well that is a shame.

There's really not too much to them. I think, if a guy was determined, he could come up with something, or maybe there's a hack or mod out there. Those things are just too much $$. I've gotta say, though, I thought they might fall off or be loose, but they fit pretty securely.

I have used them in the past and they do function well. I also agree that anything close to what they are asking for them is irritating.
B

If I was still sending mine to college no doubt it would be the Traveler brand new should need nothing till they graduate and beyond and great for tailgating at football games or whatever with the foldup cart. Not hijacking the thread just what I would do.

James Villa and his wife brought a brand new Traveler to our TVWBB Upper Midwest Meet last summer. I think all of us were pretty impressed with the design - and certainly with the results it produced thanks especially to their cooking talents that they generously shared with fellow Weber nuts at our event.

The Traveler has a lot going for it but there are some problems that will likely be addressed in later versions, the lid latch being one of them. Also, being newly released, there are a scant few beginning to show up in the used market, in the $200 - $225 asking price in my area. The Q is plentiful in the used market, having been around since 2004, and can be had for...free. It's hard to beat free.
Last edited: Jan 22, 2022

That's a bit far for me. I'm curious how would I tell what model Q it is from the pics? 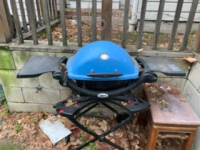 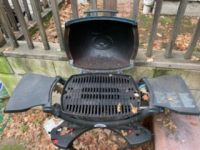 DanHoo said:
That's a bit far for me. I'm curious how would I tell what model Q it is from the pics?

I will be in Elk Grove this Sat/Sun. If you contact seller and and work out the deal, I can pick it up this week and bring it up on weekend. PM me and we can work out logistics.

@Loc Thanks for the offer but I'm going to pass on that one.

DanHoo said:
That's a bit far for me. I'm curious how would I tell what model Q it is from the pics? 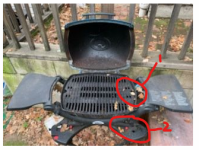 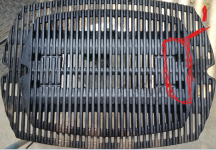 Fewer gaps in the grate at the ends (1) on the Q1xxx, legs fit in inside locations of portable stand (2). You can also count the grate bars (the spacing between bars is the same, but there are fewer bars on the Q1xxx as shown in the second picture)
J

I picked up a freebie Q200 last summer, picked up some split grates and a griddle (half size) from Qulimetal, both items came with the clips. Products themselves were inexpensive. Look for them on Amazon...

I've been using the Q extensively since summer, larger gasser getting limited use. Firing up the charcoal only for smokes (pastrami going on the Egg in a few minutes in fact).