Picked up one of the new Travelers

I also picked up a Traveler about a week ago. I had a Q1000 for small cook and tailgating. Loved the grill but hated the scissors stand so when it wore out about 2 years ago (after about 7 years of heavy use) I bought a RoadTrip because of the integrated stand. I hated the way it cooked with the two camping burners so I sold it a couple weeks ago. When looking for a replacement I saw the RoadTrip was upgraded with a tube burner (3-burners). Almost hit the buy button but saw this beautiful Weber Traveler in the similar products. This Weber was perfect for my needs and solved all the things I previously had issues with. So I bought it!

Took longer to take the grill out of the box than assemble it. The built-in stand works flawlessly. During my burn-in test it heated very quickly and was close to 600F so I dialed it back. This is a very heavy-duty/high-quality grill. I have a Chevy Traverse and the grill just barely fits with the seats up, but, the hatch closes so it's a winner! To me it is well worth the price.

Still glad I have my Q120. My daughter takes it to the beach in her small hatchback and she does not have room for the stand or a Traveler. Each grill has its pros and cons.

Very impressed with this grill. We made a "breakfast-dinner" the other day. I have a 10" x 18" cast iron griddle I purchased years ago and just placed it in the middle of the grill. I heated it up and made pancakes. I couldn't believe how even this grill heats. It's much better than my indoor electric. Next I replaced the rectangular griddle with my round Weber tall sided griddle (it was from my Performer days). Heated it up and we made some great omelets. Again the heat distribution is very even. Will be trying the grill out for tailgating at the ballgame this weekend.
M

Showed off the Traveler at a recent White Sox game. Still impressed how even this grill cooks. I only rotated the shish kabobs in place and all finished at about the same temperature. The grill got as many compliments at the food did from fans passing by. 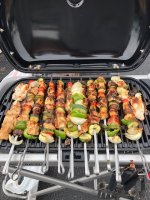 OK, now I have to do some K-bobs

Mike Goetzke said:
Showed off the Traveler at a recent White Sox game. Still impressed how even this grill cooks. I only rotated the shish kabobs in place and all finished at about the same temperature. The grill got as many compliments at the food did from fans passing by.

Great grilling and Go Sox! Maybe a World Series in Chicago this fall

! That would be an awesome time to tailgate.

Yeah I’m seriously torn on returning an unused q-2200 to Costco and buying a traveler. That looks nice.
E

Bruno said:
Interesting, I picked up a Q-2200 for a park, picnic/camping type of grill. The freaking thing is HUGE, not nearly as portable as I had hoped. I did get the stand and an adapter hose on a good deal at Costco, but I’d love to see a traveler up close.
Might just place an order and get the wife all riled up.
Click to expand...

I thought you are lock-down! LOL!

EricV. said:
I thought you are lock-down! LOL!
Click to expand...

Is there such a thing? I could convince on the money saving something or other if I had too.
E

Bruno said:
Is there such a thing? I could convince on the money saving something or other if I had too.
Click to expand...