Sam's Club had Prime briskets last week when I was in there so I picked one up for a smoke this weekend. After reading through the Franklin book I wanted to give his method a shot so I seasoned with 50/50 salt and pepper and prepped the WSM 18.5" for 275, KBB for fuel. I've never wrapped a brisket and usually use some sort of seasoning like from Meat Church or 4 Rivers but always looking for a new better tasting way so went with salt and pepper. Had a bit of temperature issue last night where the fire dipped and the cook stalled at about 142* for a bit so hopefully this thing turns out and doesn't kill us all. The smoker never went below 180* so it just cooked really slow for a couple hours. Really getting tired of the Signals/Billows giving me issues but that is for a different thread. 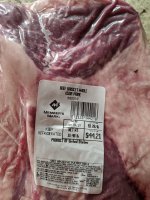 Forgot to get a precook seasoned pic but here it is before wrapping. 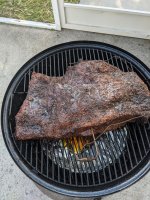 Just hitting about 180* so more pics as she finishes.

Results. Pics. How did it go
R

She turned out great! I took it off at 205 with super soft probing, probably could have taken it off a few degrees lower but still was excellent. Finished at about 1:30 yesterday then in the cooler until about 4:30. I will say I am a new fan of the salt and pepper only rub on brisket. Much more flavor than I thought it would be but just enough to let the brisket shine through.

Removed and cut the point up in preparation for a chili cook today. 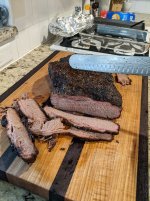 We tried a new coleslaw recipe that I found to go with it that uses heavy whipping cream instead of the usual sour cream/mayo. It is from some place called Brookville Hotel in Kansas. I'm still undecided but my wife loved it. I generally prefer more pepper and not so sweet slaw. It definitely seemed lighter than the normal mix and with a little tweaking I might come around. This is the recipe.

Stir cream, sugar, vinegar, and salt together in a bowl until sugar and salt have dissolved; cover and refrigerate dressing for 30 minutes to blend flavors. Pour dressing over cabbage in a bowl, toss to combine, and refrigerate until thoroughly chilled, at least 2 hours.
Last edited: Jan 11, 2021

I've got to get my courage up and have another go at brisket.

Did you use any wood for smoke? What was the total time of your cook, and did you have to re-load with more KBB, or did the initial load last the whole cook?
R

Thanks. I put it on about 12:30am Saturday and it finished about 1pm the next day so just about 12 hours. My smoker temps stayed a little lower than I wanted for the first couple hours (when I fell asleep) so it took longer than expected. Without that I think it would have been closer to 10 hours where I planned it. I did add about half a chimney at the end but most is left over so I probably could have made it through. I used KBB with 3 pieces of hickory but can't really say I taste it. I prefer a stronger smoke profile but my family doesn't so it worked out. I will say this is probably the best brisket I've cooked to date so I plan to stick to the recipe.

Chili with some leftovers is simmering as we speak. It is just random recipe I found that I substituted brisket in. 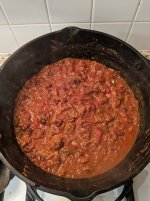