This is a table service restaurant with rustic decor in the Old Town Scottsdale tourist district. The place was busy when we arrived at 8:30pm on a Sunday night, and the first impression was how dark it was inside. As we entered, we were warned that food was coming out of the kitchen slowly and it might take 30-40 minutes to receive our meal. We were in no hurry, and the good news was our order was taken quickly and our food arrived within 10 minutes of ordering, so that turned out to be a non-issue.

As you may know (or should know), the general rule is that barbecue meats are best enjoyed at lunch time and tend to degrade as the day progresses as they can be hard to hold, especially at a restaurant like this one that serves until 10:00pm.

In light of this fact, I stayed away from the plate dinners and ordered the French Dip sandwich consisting of smoked prime rib and horseradish cream on a toasted baguette with au jus on the side. I figured it's easier to hold a prime rib roast and slice the meat to-order for a sandwich. My decision paid off...the prime rib was moist and tender and had a delicious smoky flavor. My wife had a take on Chinese dumplings called "Boot Dumplings" consisting of pork belly & shrimp, mango chipotle sauce, and a beet coulis (sauce). She said the smoked pork belly made the dish.

Adjacent to the bar is a covered dining patio with gas fireplace and the Southern Pride pit that's used to make all the smoked meats.

The barbecued meats featured on the menu include brisket, pork, St. Louis ribs, turkey breast, hot link, prime rib, chicken breast, and salmon. All of these are available at entrees including cole slaw and tortillas and some of them are available as sandwiches or as two/four meat BBQ samplers. There are also tacos (pork belly, brisket, green chile pork, salmon) and a BBQ burrito. Also burgers, salads, and some interesting starters like fried mac & cheese balls, crispy rock shrimp, a bacon board, and the aforementioned dumplings my wife enjoyed.

Food and service were good. I would go back again for lunch to try their more traditional barbecued meats. 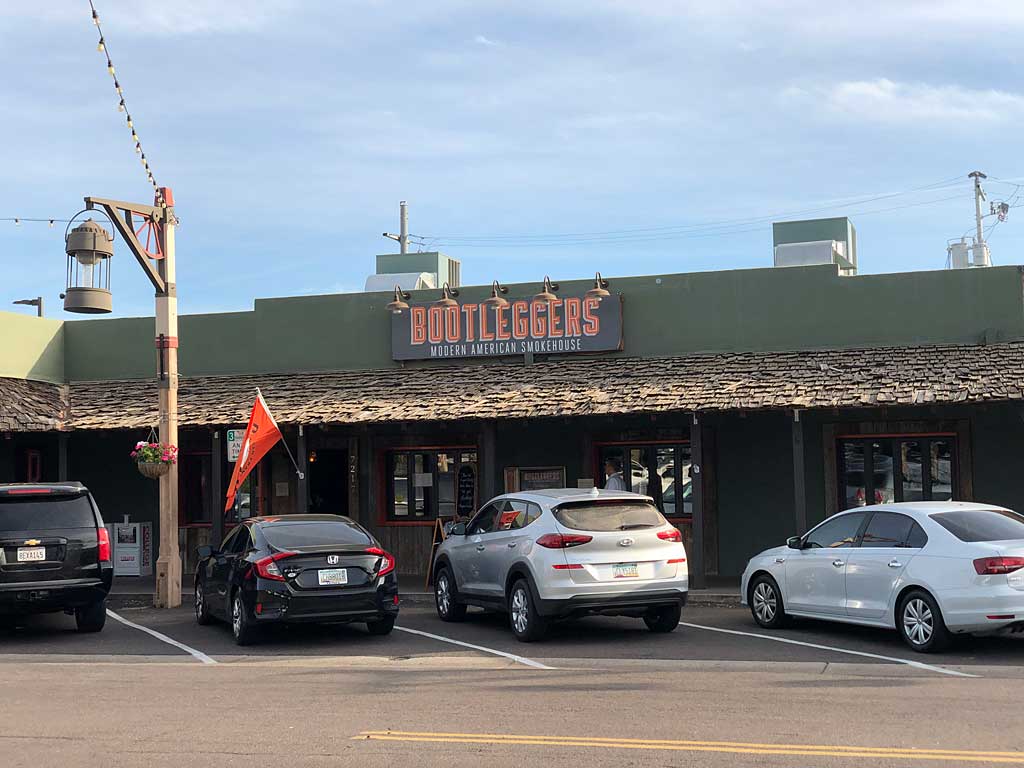 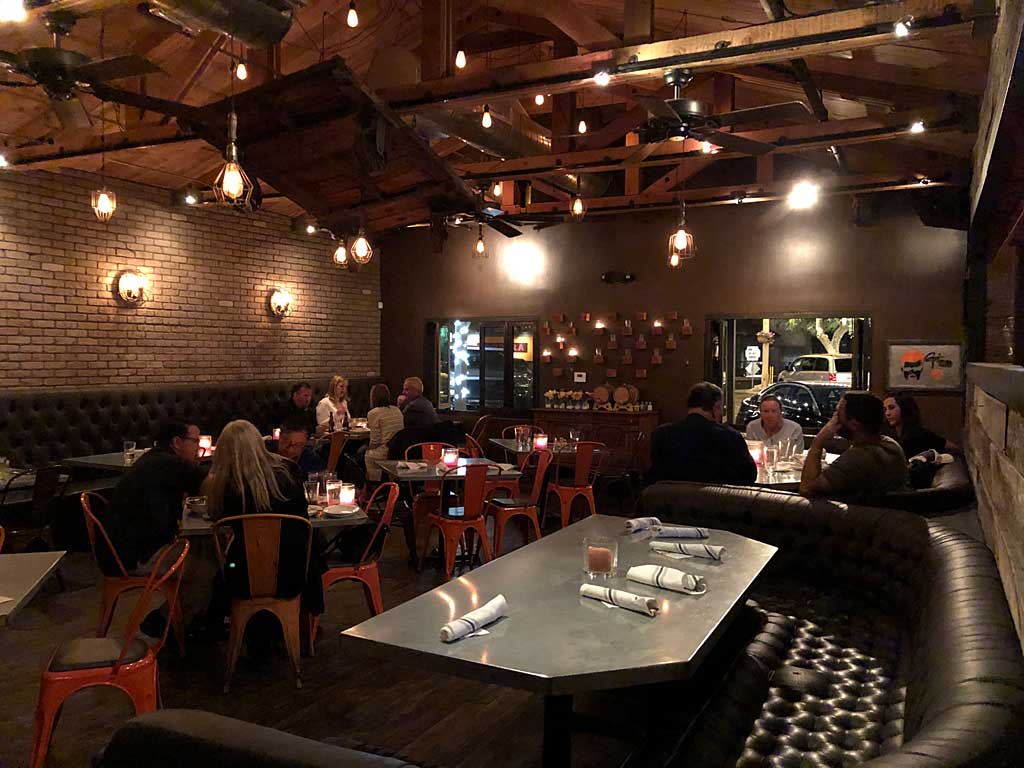 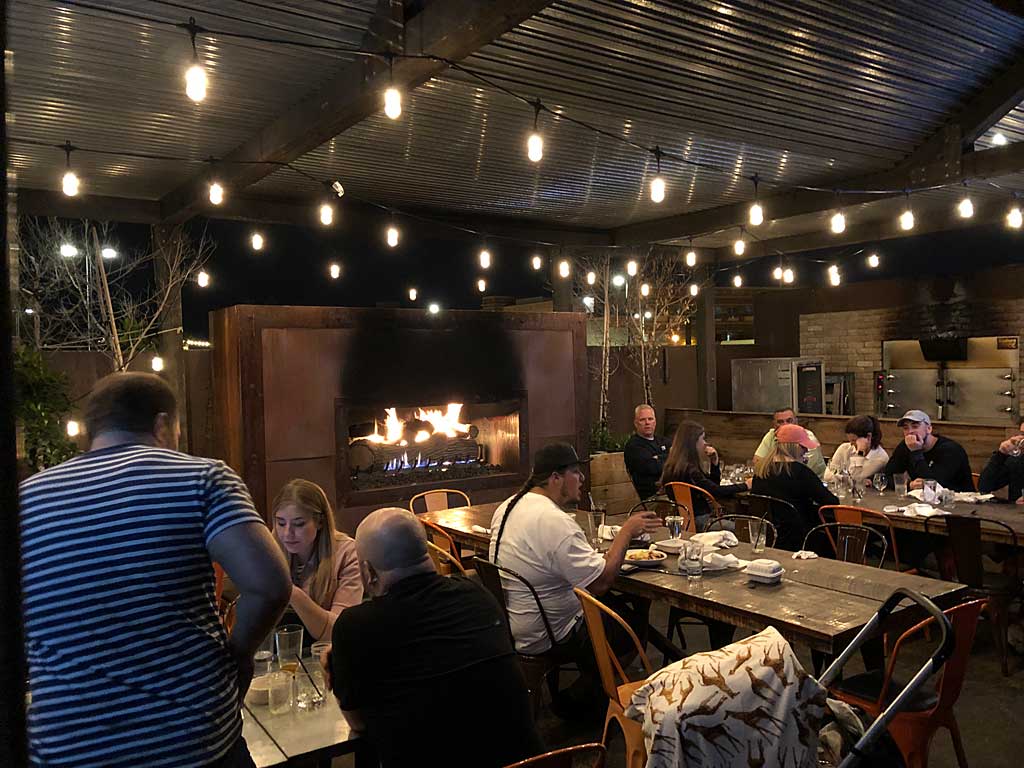 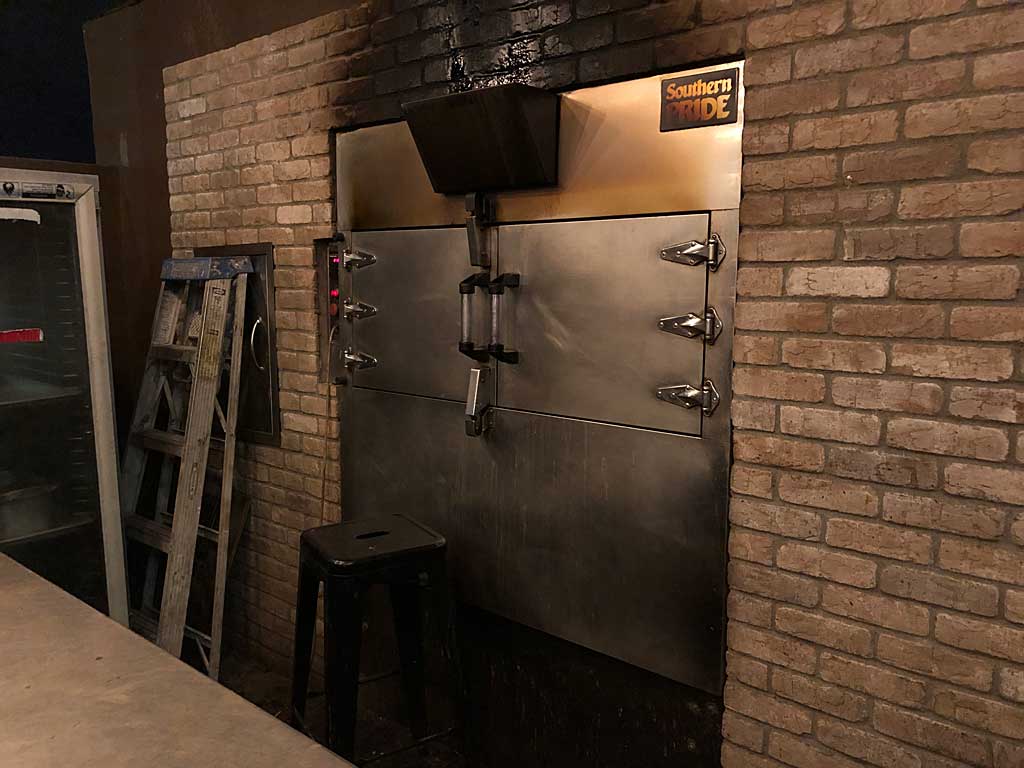 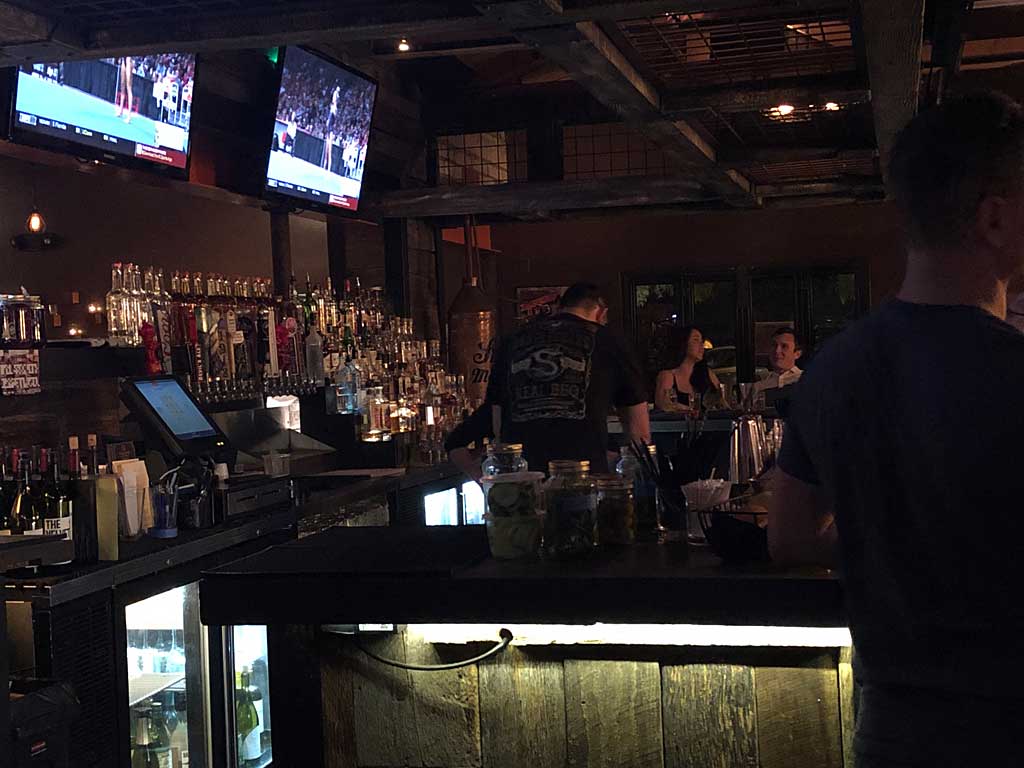 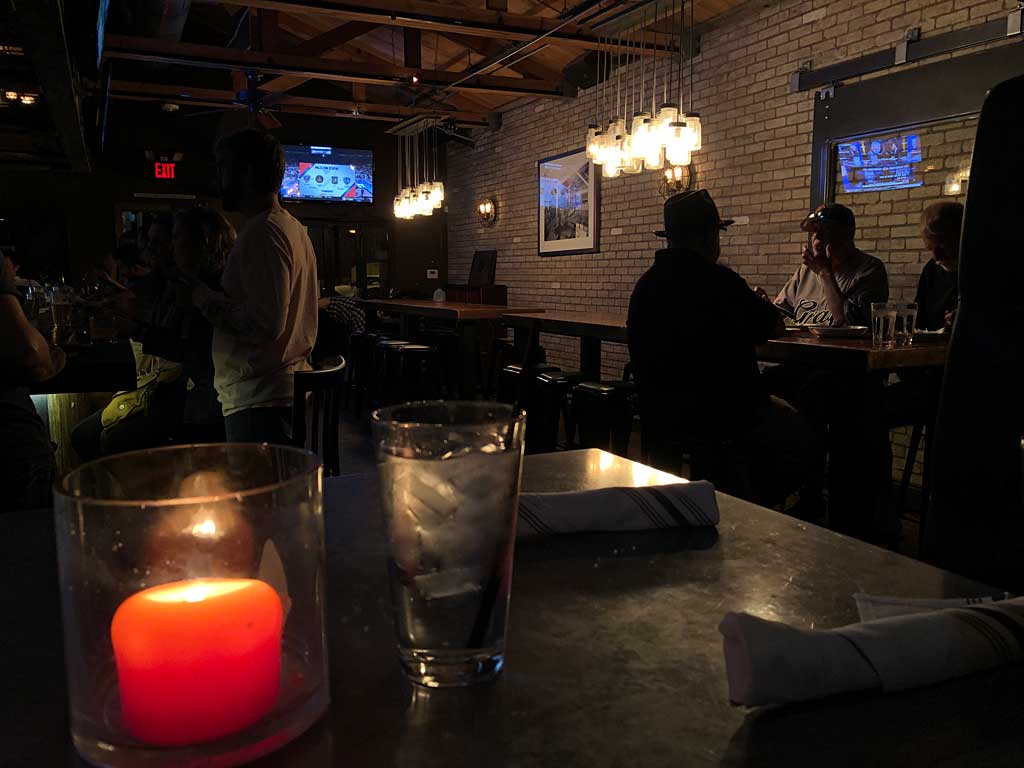 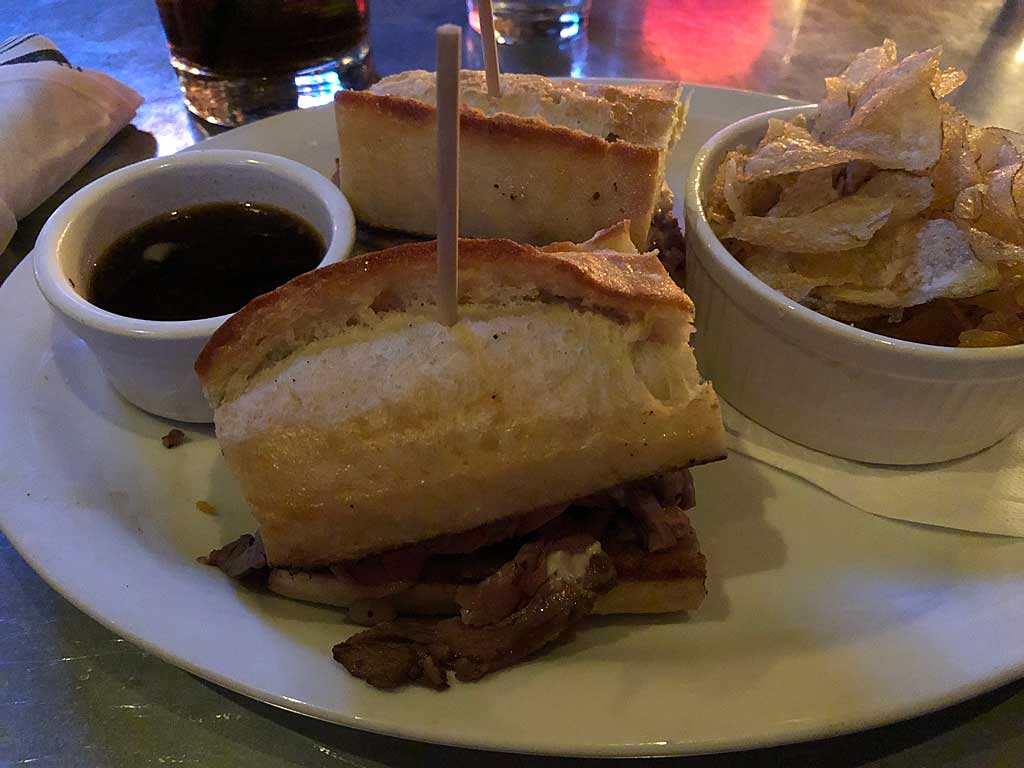 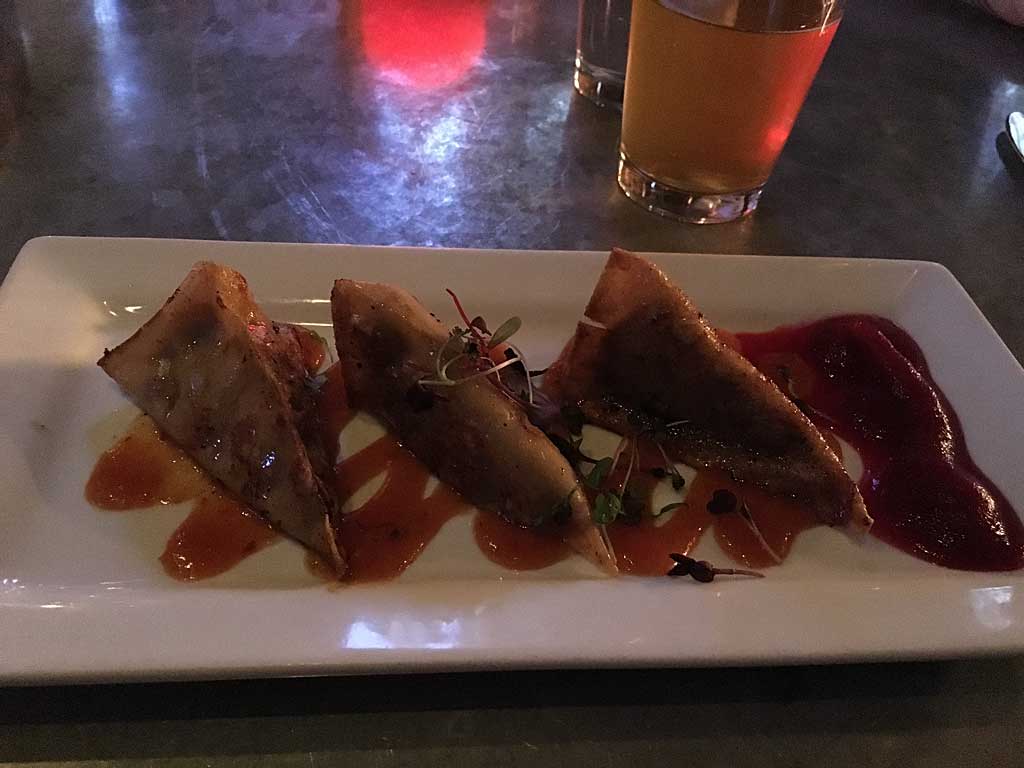 Staff member
Postscript: As I looked later at this photo, I noticed the Guy Fieri Triple D logo on the wall. Can you find it?

My wife and I like visiting Triple D restaurants but little did we know we had stumbled into one that Sunday night. A couple of days later, we watched the Bootleggers segment on Triple D and it turns out the two items featured on the show were the same two items we ate for dinner: the Boot Dumplings and the French Dip/Smoked Prime Rib sammie! Who knew? We didn't know at the time.

Chris, our plan was dinner at Little Miss BBQ in Sunnyslope.
they opened at 4pm... we arrived at 4:30 to a line longer than I could see.
told the wait was 2 1/2 hours. To encourage folks to wait, a guy came out with sausage samples...
Tasted GREAT.
We waited a few minutes then decided to split
We decided to go to bootlegger in Scottsdale.
we arrived at 5:30 Saturday evening, the 9th of March.
told the wait was 1 1/2 hours for a table
we were tired of driving so we stayed
waited at the bar with wonderful tapped Scottsdale Blondes from local Huss brewing...
After an hour and seeing others just walk in and get a table,
I decided to ask the hostess how much longer our wait will be...
That’s when I saw my name crossed off her list.
After 10 long minutes of more confusion, we were seated in the room on the opposite side of the smokers
Right next to the wood pile.

We placed our order immediately then waited another 40 minutes or so
That’s when our server came over & said it’ll be a few more minutes, they’re running behind

As soon as he walked away, two other servers showed up with our dinner.
So, confused they were.

We ordered the Combo plate of smoked BBQ:brisket, pulled pork, hot links, turkey, ribs and bbq beans all slow smoked with oak and pecan....
with sides of broccolini and Mac & Cheese.


The brisket was tender, but little smoke....
i liked the sausage, but the sample we received at
Little Miss BBQ was tastier.
All the BBQ was delicious!
perhaps the only thing I’d do different:
not serve the St. Louis ribs sauced.
They did have three different sauces on the side.
And they tasted OK.
I would certainly return with hopes they would have corrected their confusion at the hostess table.

We do have plans on returning to Little Miss BBQ in Sunnyslope about an hour before they open on Tuesday.
That is about the time a line starts forming, the sample-sausage yielding gentleman told us.

I also took photographs of both places however, I have no idea how to post them using my “smart” iPhone
I will give it a shot upon returning home.

Staff member
Yes, there's currently something wrong with staffing or kitchen operations at Bootleggers in terms of getting food out of the kitchen in a timely manner during this peak season of Spring Training. Sorry to hear there's a problem with the reception desk, too.