I have been away from the forum due to work pressures (Thanks COVID. No one sick. It just changed my work schedule.) I like to read or at least preview every post in a forum. I find nuggets of information in the body of the threads that just pop up and the thread title doesn't lend itself to this kinds of items.

All that to ask how do I go from one thread to the next thread easily. If I read thread #1 dated today and I want to go to thread #2 on the same day, how do I do this? In the old forum you could click on next and you could get to that thread. Is there an easy way to do this?

Staff member
Next/Previous Thread is not a feature of Xenforo. It's never been prioritized high enough for inclusion in a release, which tells me they believe it's not a popular feature. Which does not diminish your desire for such a feature.

This feature is available as a third-party add-on at additional cost, but it's not an issue of cost. I try to run Xenforo with as few add-ons as possible in order to avoid bugs, avoid conflicts between add-ons, and to make support and troubleshooting as simple as possible.

What you can do is mouseover the title of each thread on a forum homepage and you'll get a preview of the initial post. Move the mouse from title to title to preview each thread. 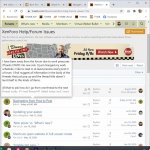 Hi Bob. I also like to catch-up when circumstances keep me away for a span of time. Not every thread pertains to my interests--and I don't read those that don't--but I at least like to review a title and make the decision for or against drilling into it for a read. Case in point: HeaterMeater is not applicable to my experience. Perhaps I'm not utilizing the available tools according to best practices, or in accordance with their intended purpose, but when I come here I click on the "New posts" link and scan each thread until I reach the "Threads below have not been updated since your last visit" marker. Since I read this forum from a desktop, I click "Open link in a new tab" on each thread of interest.
You must log in or register to reply here.
Share:
Facebook Twitter Reddit Pinterest Tumblr WhatsApp Email Link
Top