My grandmother passed away over seventeen years ago and was one heck of a cook. I don't know how in the world she did it: cooking for eight sons and two daughters daily. Only recently have I been privy to any of her recipes. The one I'm hooked on is her cornbread. As far as I'm concerned, this is tried and true southern cornbread, what I grew up on. I've tried sweet 'yankee' cornbread at different points over the years and don't care for it. I love me some Mexican cornbread, though! But I digress. This isn't some revolutionary recipe or anything, but man oh man is it good. I made a pot of chili a few days ago and made a HUGE batch of this recipe. I doubled up the ingredients, but here's the basic recipe for a pan of it in a 10" cast iron skillet.

The photo is from a big batch (doubled up recipe) that I made in my 12" cast iron. 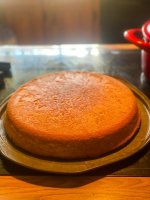 1 cup of corn meal
1 cup of self-rising flour
1 egg
3/4 cup of buttermilk* (I use more than that for a smoother batter)
1/2 stick of butter
Salt (optional; I use salted butter so I don't add extra salt)

1.) Preheat your oven to 400 degrees; add the half stick of butter to your cast iron on the stovetop, allowing it to melt on medium low.

2.) In a large bowl, add the corn meal and flour (mix it up at this point if you'd like) followed by the egg and buttermilk. Mix! Some people whisk the egg up prior, but I've never had a problem cracking it right into the bowl and dispersing it throughout the mixing process.

3.) When the butter is melted, tilt the cast iron so that the butter greases up the sides and all over the skillet. Pour it directly into the batter and sit the skillet back onto the stovetop.

4.) Mix that buttah up into the butter until you reach your desired consistency. Again, if it is too thick, you can either add more buttermilk or a little bit of milk.

5.) Pour it into the skillet, and then toss it in the oven for roughly 25-30 minutes. I usually like to let the crust set for a bit in the skillet before I add the pan into the oven, but it's up to you.

Pretty basic cornbread recipe, but so delicious. I'm glad I got ahold of the recipe. Unless there is something that I sell, I never hold back from sharing any recipes. In fact, and I apologize for any potential offense, I have always thought it to be terribly childish of anyone being greedy about holding onto 'secret recipes' -- absolutely ridiculous. It is one of my biggest qualms of the cooking world. I'm a big believer in sharing the love of the grub!

Thanks for sharing the recipe, always like cornbread with my chili and I love using cast iron to make it.

Sounds fantastic, will show the wife and see if we can get this going.
R

My grandmother’s recipe was basically the same, maybe a little less butter. She would eat leftover cornbread and butter milk mixed in a bowl for breakfast.

My grandmother has been gone for 35 years and I still miss her.
J