Okay I met my match. I’ve been cooking on charcoal Webers for over 20 years now. I have every charcoal grill and WSM ever made by Weber (even an original master touch) but I’ve met my match here. Have had a trip to NoWhere Nevada planned since July but come August 3rd the state put up a ban on wood fires and charcoal BBQs. Dang I have a SJ, a JJ and a 22” Weber kettle converted to a portable with Cajun Bandit legs. Headed to the local ace to get a portable gas grill. Had to be a Weber so I grabbed a GAWG. Nice little Q for gas. Worked great on the trip. Cooked burgers, steaks, chicken, chops and more chicken. Cooked easier than I thought. Then I pulled the cooking grate...Holly Smokes! The bottom of the grill looked like I 100 cooks on any charcoal grill and never been cleaned and no drip pan used ever... okay so what is the secret? I thought about foiling the bottom but there are 3 large holes. Can I foil to help with clean up? Should I foil and poke holes in the foil where the 3 holes are. What do the 3 holes do? I can’t imagine that clean up should be this hard any ideas. I need help. I really want this to work but geeze what a messy little BBQ...

Think you have the newer style Go Anywhere gas without the traditional flavor bar?

I have an older one and yes it's a paint to clean. I've heard the newer ones are even more of a pain. I think you can "convert" to the older style by just swapping on a flavor bar and grate and ditching the existing grate. 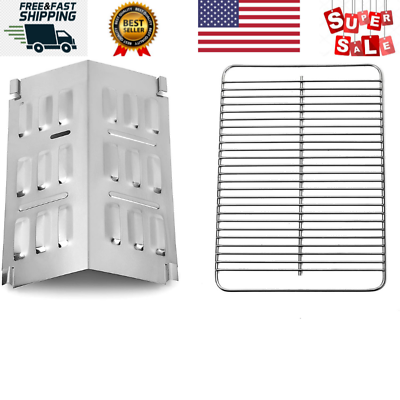 Find many great new & used options and get the best deals for Cooking Grate Grid Flavorizer Bar for Weber Gas Charcoal Go-Anywhere...New HOT at the best online prices at eBay! Free shipping for many products!
www.ebay.com

Not sure what better methods others have other than staying on top of cleaning after every use.
J

The bottom of the grill is effectively a drip pan. They are very messy. Even foil, the grease will seep down, it's hard to mitigate. I use mine primarily for lean steaks (ny strip, tenderloin) and hot dogs. The Q1000 series are FAR easier in this regard. I rarely use my gas GAW because of the cleanup

Thanks Jacob. When you foil yours do you cover the three vent holes at the bottom. I don’t plan on using this deal much but with fire restrictions it’s about the only option when camping or going to the lake
J

Dustin Flavell said:
Thanks Jacob. When you foil yours do you cover the three vent holes at the bottom. I don’t plan on using this deal much but with fire restrictions it’s about the only option when camping or going to the lake
Click to expand...

It's been years since I messed with foiling the gas GAW but I believe I just made a "pan" for the bottom only. Nowadays, if I need gas I'm bringing the Q. Wife and two kids, a GAW isn't quite large enough
D

Other than lining the bottom with foil, can you set a foil drip tray to catch the grease on the gas version? With the charcoal version, there's the second grill below where we can put a drip tray when zone cooking.

I've sure enjoyed the charcoal GAWG. One of the great things about the GAWG is how easy it is to deal with because it's so small.
I can easily put the whole thing in the basement utility sink to scrub out.

I wanted to give it a thorough cleaning before storing it on the basement shelf for winter and to keep the whole basement from smelling like old BBQ. Smart people maybe would clean it out after every cook, so the mess doesn't build up and it's easier to clean each time.
But I was too lazy to do that, so after a season of grilling it gets really built up and it took me longer to clean out.

I was sure happy that after taking it out of the box and assembling it last year, one of the first things I did was line the bottom with foil (an excellent tip). The other thing that really helped keep it clean was using a foil drip tray with water under the meat to catch drippings (and keep the roast moist during a long cook time).