First Rotisserie Chicken - Got Some Questions

I got a rotisserie ring and all the fixings recently from Cajun Bandit and gave it a go tonight on the Weber Performer.

I marinaded a 4 1/2# bird for approximately 8 hours in a garlic, paprika, cumin, lemon juice marinade meant to replicate some of the pollo a la brasa I have eaten while travelling and living in South America. My wife and I really like that flavor.

First, I set up the fire. I filled each of the baskets with Kingsford. I then took half the briquets from each basket and put them in the chimney to start.

Once I got the coals fired up, I dumped half each back in the baskets. I did not use a drip pan. I'll burn the residue out of the bottom of the kettle tomorrow when I cook some burgers.

While the coals were firing, I got the bird set up on the spit.

To secure the bird, I turned the wings around and slit a pocket in each side of the breast to hold the drumsticks so nothing would flop around while on the slow roll. The bird:

The lid temp ran up to 350 pretty quickly and I closed the vents down to about 1/4 open so it would stay in that neighborhood for the rest of the cook. After 30m, I opened the lid and marinaded with a mixture of melted butter and pineapple habanero jelly (Texas Pepper Jelly).

I set the rotisserie counterweight in line with the birds back to counter balance the weight of the breast. It rotated flawlessly throughout the cook. A photo of the counterbalance:

I didn't keep a close eye on the time but when the drumsticks started wiggling right, I pulled it off, let it rest and carved it up. Total cook time was between 1h 15m and 1h 30m. Here's a couple of shots of the last rotation. If you scroll through fast, you can see it move!

I took all these pictures of my setup as I had planned to put together a primer on rotisserie cooking. I did a lot of thread reading getting ready for this cook and didn't see many posts that covered the real basics (fire setup, bird binding, etc.). Maybe once I've conquered this method, I'll follow through with that post but this cook left me with a couple of questions.

Though the bird was eaten readily and everybody was happy, I can't say I was thrilled with the outcome. Much of the flavor from the rub and the marinade gets imparted on the skin. Once the bird rested and I carved it, the skin slid right off and got left on the platter. Next time, I may try leaving several coals directly below the bird to get some crisp on the skin, or maybe I'll try to spread the coals out toward the end of the cook to get a more direct heat cook. Does that sound plausible?

The meat was very moist but I wasn't overwhelmed by the flavor. I punctured the bird with a meat fork before putting it in the zip loc and then the refrigerator. I was happy with the moisture so that part went well. I let the bird rest 15m before I carved it. It turned out a lot of juice when I started cutting, makes me think I should have let it sit a bit more.

I could use a primer on carving a chicken. I get the drums and wings off in a presentation quality cut but when I carve the breast, it starts to looks like Nightmare on Elm Street, don't even ask about the thighs and the back - shred o lator.

The Weber was still running at 350 an hour after I took the bird off so the coals, set up and firing method worked out fine. I could have run it up around 400 for the entire cook with the same setup (I ran the vents wide open at the end to see how how it would get, it got to 400 and stayed there).

I'll keep working on this. I would appreciate any insights from the more experienced among us.

Your pics look good. I don't have a roti, so can't offer much in terms of advice. But maybe a higher heat cook will get you the skin you're looking for?
R

I roti a good bit. And chickens come out with crispy skin. If you want to get to crispy skin faster air dry the bird a bit in the fridge after moving out of the brine/marinade. Pat it dry, put it on a rack over a drip pan and set it in the fridge for about 8 hours or so.

In addition (or not, up to you) you might want to consider pushing a seasoned butter mixture under the skin before mounting on the spit.

I don't think doing a minion on roti cooks is important. I always start with all lit. And I do much as you did I.E., coals to either side. Just no need to minion or worry about temps so much. 350 or higher. With a roti you can leave the lid off to control over temps.

Remember "spit cooking" historically was done open air over hot coals, period. "We don't need no steenking lid, and who gives a sheet about air temp?

Go by the temp of the meat not the lid temps. Use an instant read thermometer to watch that (I also use the roti Maverick setup depending on what I am cooking, but NOT necessary).

More flavor in the meat? Stronger brine or marinade solution and leave it in longer.

You're photos look great and that bird looks awesome! Sounds to me like it needed to be on a bit longer with higher heat is all IMHO as far as getting to crispy skin.

Thanks for taking the initiative by posting. I've gotten lazy over the last year or so with photos, etc. It would be great to have good detail on roti cooks, your right. Not overly complicated, but there isn't a lot of detail on this method here. If I had my "druthers" I would have a separate cooker set up permanent with the roti. I would definitely use it more if I didn't have to attach and then breakdown all the hardware each time I wanted to do it.

Hmmm, maybe that will be my excuse to get that new ranch or 25" kettle....

Think mr Benash coverd it all.

Ray - Thanks for the comments. Very helpful.
G

i rotiss with the coals on just one side. i set that side up so that the top of the food is going towards the coals. i just dump in a lit chimney and cook at a high temp. chicken doesn't take that long. i truss the chicken loosely so the heat can get to all the burd., trussing tightly makes for a bit longer cook. as mentioned, if you want taste in a bird you need to brine or put the rub etc under the skin. the skin should be dry as much as possible. patting it dry is ok at best. as rottissing self bastes, there is no real reason to baste further. if you really want something on the skin then do it the last few minutes. as to crisping the skin one trick is to stop the rotiss and let the skin crisp up towards the coals and then manually turning it to a new section until its all crisp.

Jeff, first off your chicken looks great! I pat my chicken down As dry as possible after brining/washing then I coat my skin in melted butter and apply my rub. I cook A little higher heat between 375-400 and the skin turns out nice and crisp.You should be fine cooking at a little higher temp as long as your rub doesn't have to much sugar in it! Looks great from here!

I'm going to politely disagree with the notion that dryer skin would have made the difference. HH is really the key here. IMO the whole point of the roti is that you can apply HH slowly, over the whole bird. If the bird isn't getting hit with HH at some point in the cycle then the effect is lost. What I want is to gradually build the browning on the roasting meat throughout the cook. Rotis are particularly well suited to round or unevenly shaped roasts (like a whole bird).

I haven't done a lot of cooking on a roti but I intend to do more. The problem is getting it set up on my kettle. These birds were cooked over a camp fire. they took about 2 hrs and were very moist and the skin was very edible. 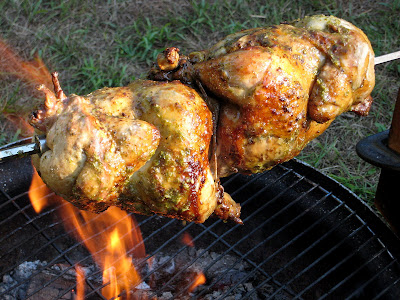 As far as craving goes, I try to quarter the bird and keep the pieces whole. If you want to slice the breasts, I suggest cutting the meat off the bird first. Start with the bird, breast up and the neck ends towards you. Slice with your knife, along the keel and down along the ribs. Remove the breast and slice crosswise. Make sure you have a sharp knife to keep from mashing the meat.

& I just let the fire dry my bird's skin

Originally posted by jeffsipes:
Ray - Thanks for the comments. Very helpful.
Click to expand...

No trouble - forgot to mention that pretty much any bird I'm cooking would be trussed, but others have mentioned that. Roasts and other stuff gets tied, depending. Also what others say - the roti method should/will crisp the skin all by itself. The other thoughts were additional/optional. I found that air drying or adding herb butter under the skin makes it even that much better/tastier/crisper. I do that when I cook indoors as well.

I also will split the coals or place on one side depending. That in itself doesn't really make much difference IMHO. But I usually do have that pan of water underneath to avoid flare ups.

If your poking holes in it may as well inject some of the marinade juice while its sitting on the counter. May have to strain it if its full of chunks. Or off the shelf comes with an injector I like creole butter. Love your set-up I can tell you'll have this problem pegged in no time! Keep em turnin'!
You must log in or register to reply here.
Share:
Facebook Twitter Reddit Pinterest Tumblr WhatsApp Email Share Link
Top