DWambolt said:
If you've never been to Swingles or tried this teriyaki infused try-tip, you are really missing out
Click to expand...

Thanks for the tip I am in the area your area to be exact I've never heard of them. Just got done checking out their website and I may have to take a little drive and drop in. I've been looking for another butcher ever since Dee's meat went out do to a fire that totaled the business.

Chris. I am sure that is the issue. However, it is the temp at meat level that is important. Lid mounted thermometers should only be used as an estimation of the actual grilling temp and probably the best use is to simply monitor fluctuations. While they are probably fairly accurate at measuring the actual temp at their probe location, it doesn't necessarily reflect the actual grilling temp at meat level. I plan to measure the difference between grate level on my Thermoworks Smoke and then also fasten the Smoke probe near the Genesis 1000 lid thermometer to see what kind of discrepancy I get there. It could be the lid thermometer is simply old and worn out as well.

I will post up some findings when I use my grill next.

First of all, thanks for all of the positive comments. As a bit of background, I'm a tech guy and if you see any charts/graphs, it's going to be coming from a third party application. In this case, it's the Thermoworks Smoke with the WIFI gateway.

Back to the Smokefire. I decided that I'd inspect the inside of the cooking chamber this morning and give it a closer look before setting it for 235 while I get ready and head to the grocery store. Overall, the interior was about how I expected. Cleanup in the Smokefire chamber is going to be a bit more work than on some of the competing smokers. However, because it's easy to disassemble without any big heavy drip pans or grates, it will likely pencil out to around the same amount of effort. The burn pot was very clean and I do like that design. I did notice some charred pellets at the end of the auger tube, but otherwise, nothing else to note. One negative is the amount of ash the covers the unit during operation. The last pic will show it, but it really blows some ash around.

I'll test the temp probe location today before I put my ribs on and will try to get the probe as close to the chamber probe as possible. I decided to wheel the Timberline 1300 over next to the Weber EX6 for a few comparison shots. In terms of weight, the EX6 is lacking. The Timberline 1300 is a beast and quite honestly, has far superior build quality, along with fit and finish. From the double walled construction, to the nice seals around the chamber door, to the solidness of its parts, the Smokefire doesn't really compete. The Smokefire's door is ill fitting, especially along the top edge and on the left front side at the bottom. I'm going to see if I can tweak it a bit tomorrow.

However, we don't buy smokers for fit and finish, we buy them for their ability to smoke or in the case of the Smokefire, perform a variety of functions, which thus far it has done in a far superior manner to that of the Timberline 1300. More to come as I pick up the ribs. 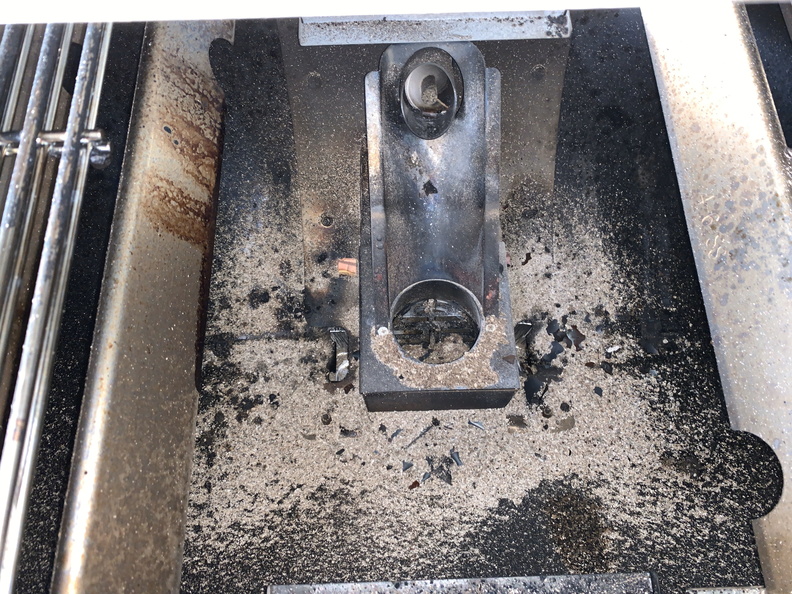 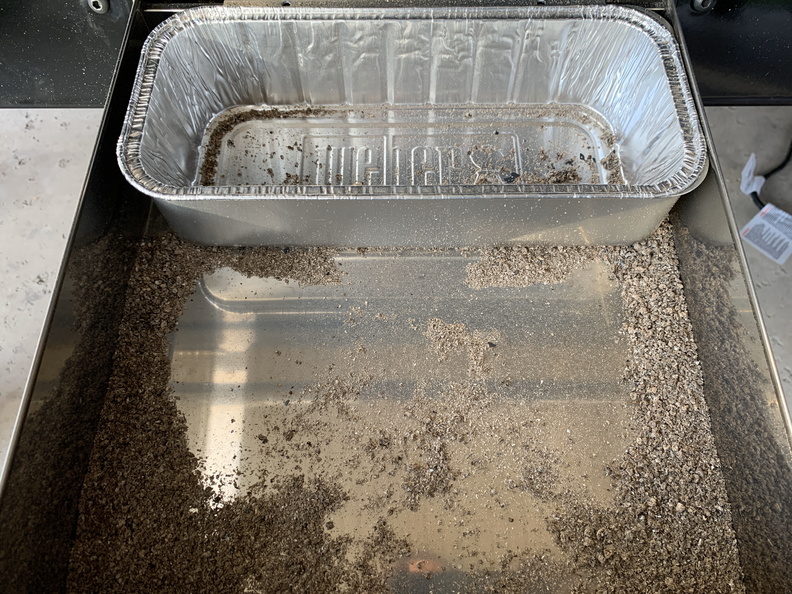 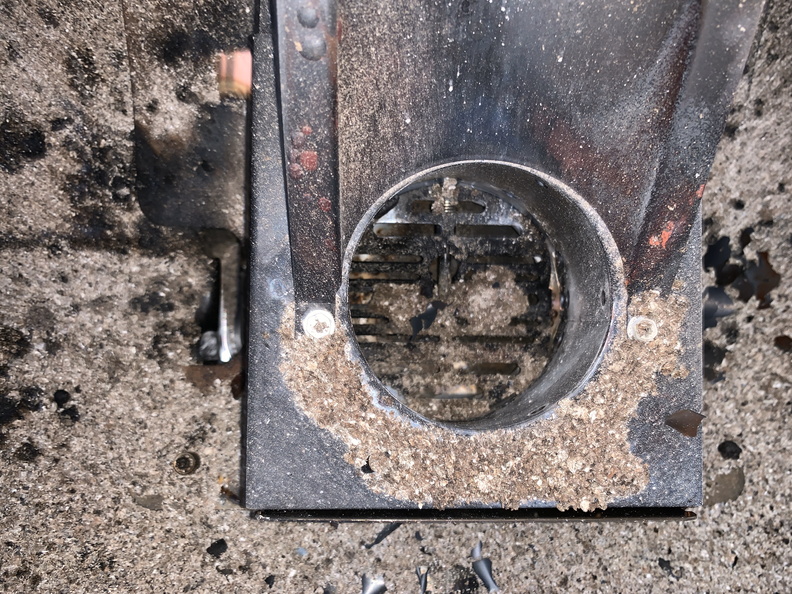 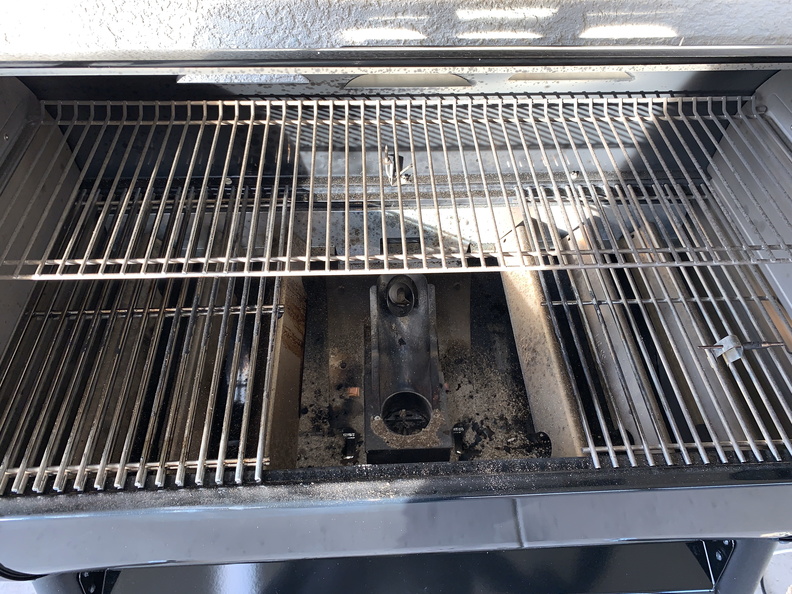 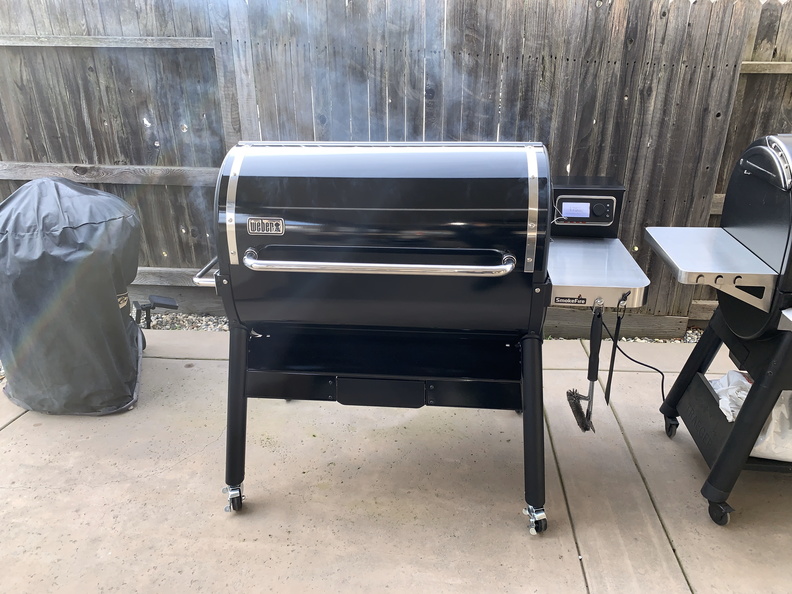 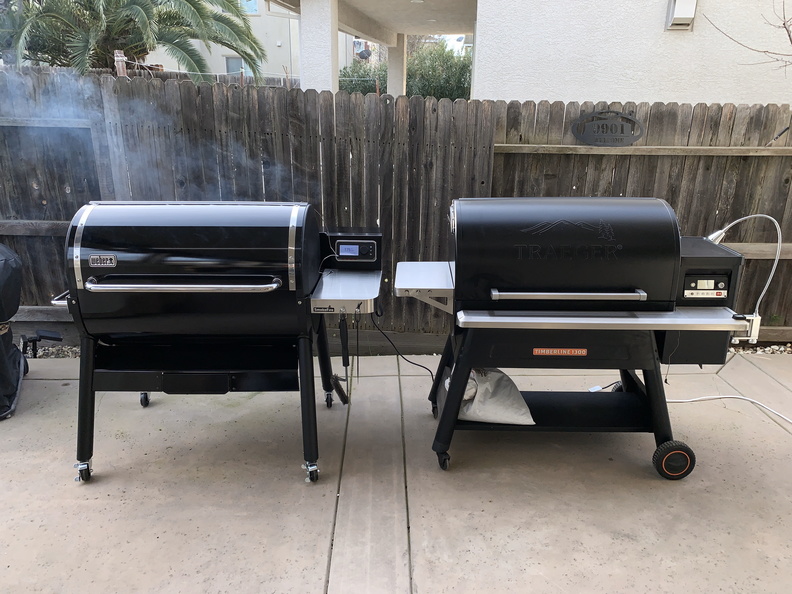 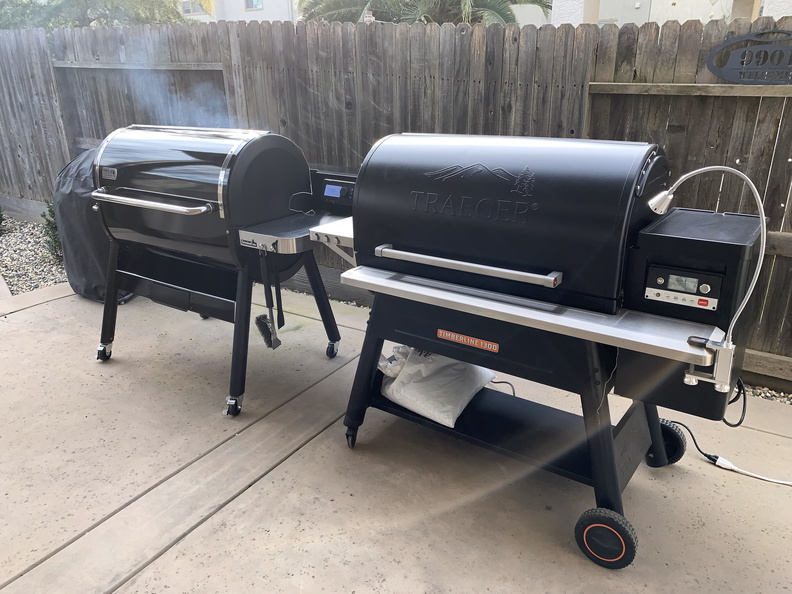 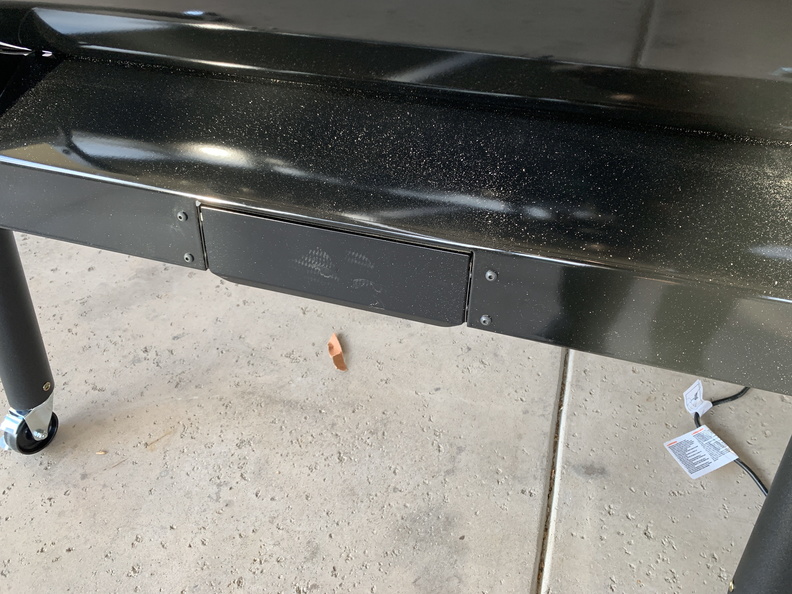 I've ordered up a few mods for the Smokefire EX6. Here's what I'll be installing this weekend:

Thanks to Same Day delivery, all of this stuff should show up today from Amazon.
Last edited: Feb 15, 2020

HOUSTON, WE HAVE A PROBLEM....

So right after I posted the two updates above, I walked out to check on the Smokefire before I headed into the shower. What I found was a FAIL. It was coming up to temp when I came inside, but when I went outside, the unit was not in a normal state. The controller was putting out a constant tone and it displayed this:

Cool, right? Except it wasn't heating up, it was off. No fan, no fire, nada. Now when I came inside, it showed over 200 degrees and rising. At this point, just the constant tone and the controller was frozen. I couldn't do anything by pushing any button or the dial. I had to power it off and back on. It's going through the startup procedure again. Not a warm and comforting sign, especially since the fire pot was clean, no wind and nothing abnormal going on.

I went ahead and hooked up the Thermoworks Smoke and placed the probe as close to the controller/chamber probe as possible.

DW: Please show a side by side comparison of the new 7mm grates compared to the stock grates.

Bruce said:
DW: Please show a side by side comparison of the new 7mm grates compared to the stock grates.
Click to expand...

It came up to temp this time with no issues. I moved the probe and it did seem to close the gap to around 15-18 degrees. However, since the controller doesn't show you a live reading, the difference might be minor.

One area where I think the Smokefire will excel versus other pellet smokers is the amount of smoke output. I watched it running through a few cycles and it was always putting out a nice thin blue smoke. The Timberline 1300 I have for example, kind of cycles to smoke/no smoke. The fire pot design, fueling and fan controls seem to work well here. 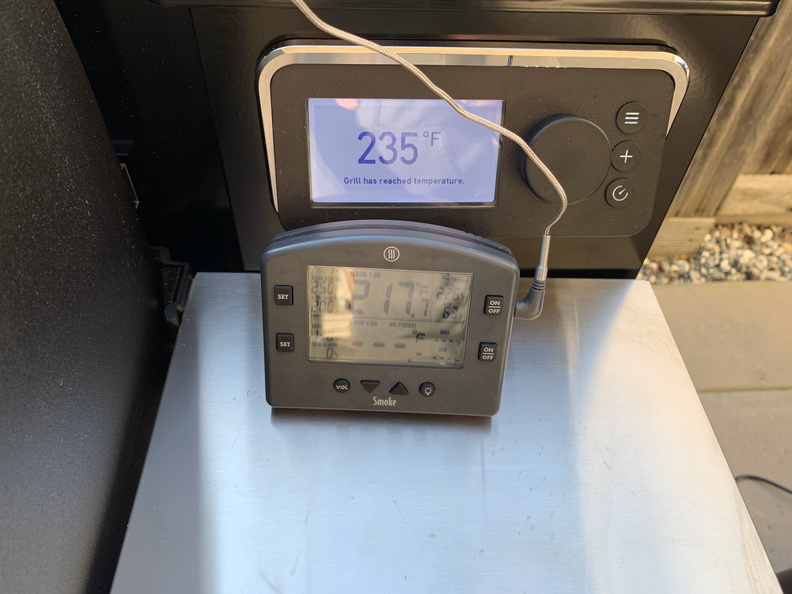 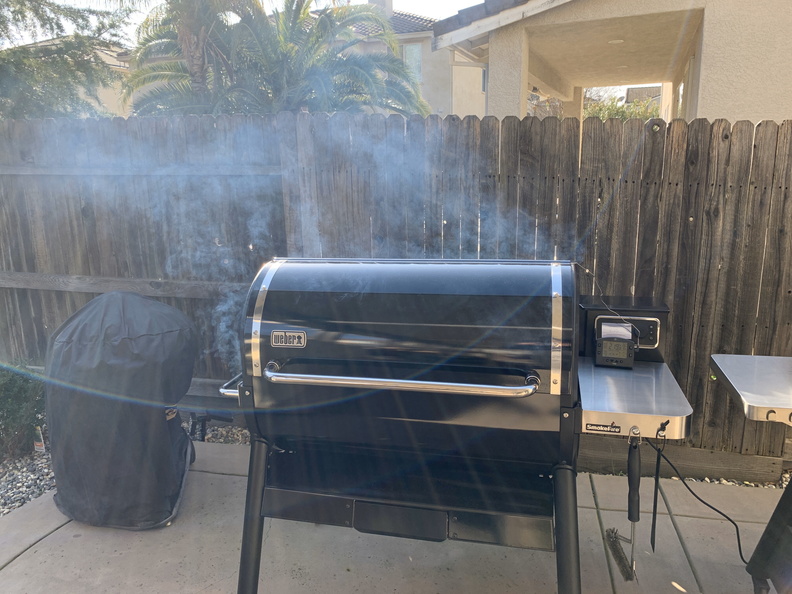 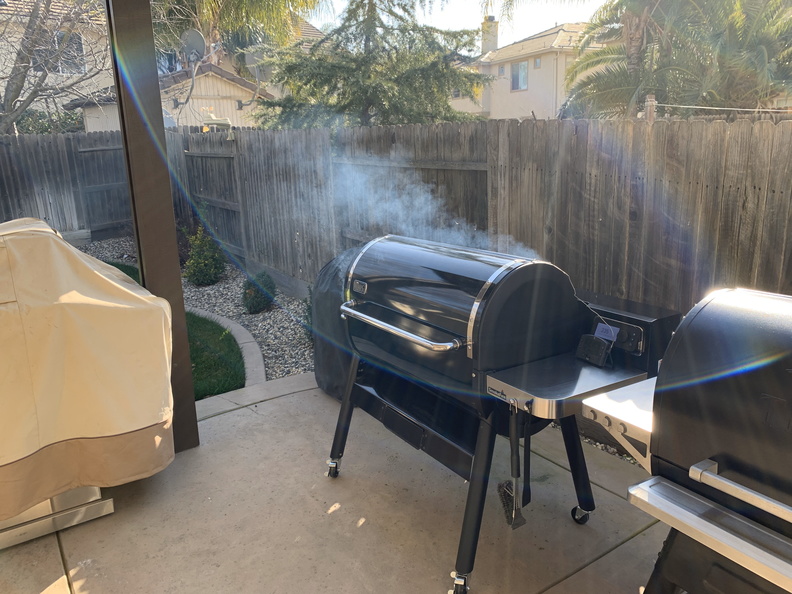 Kinda what I thought. Seems to me the big release hangup was the controller. Also looks like they didn't get it right either. Sad at the price point they're at you would expect it to work correctly

Chris Allingham said:
I wonder if temp difference is just due to location of probe at back of cook chamber vs. on the middle of lower grate. Stick the ThermoWorks Smoke air probe next to the SmokeFire air probe and see if there’s any difference.
Click to expand...

i plan on trying this when I get mine up and running. I agree with whoever said we should be able to calibrate the temp controller.
Last edited: Feb 15, 2020

Picked up a rack of baby backs (3 lb). Trimmed and rubbed with avocado oil, then coated with Killer Hogs rub, some cayenne pepper and topped with a little rosemary and black pepper. Into the smoker at a grate temp of around 225ish degrees. I'm not going to wrap them or do anything fancy. I just want to see how they cook low and slow. I may mist them with some red wine vinegar / apple juice later, but we'll see. I did add a small water pan inside of the cooking chamber to add some moisture. 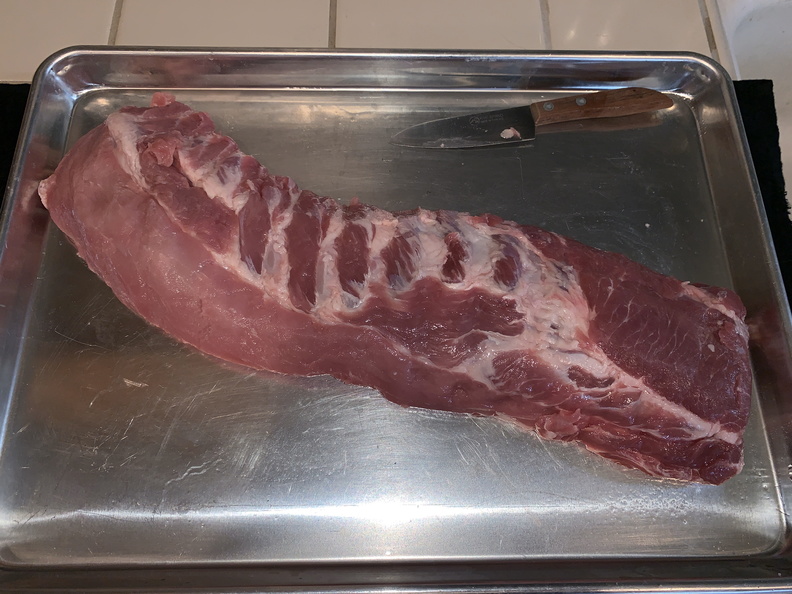 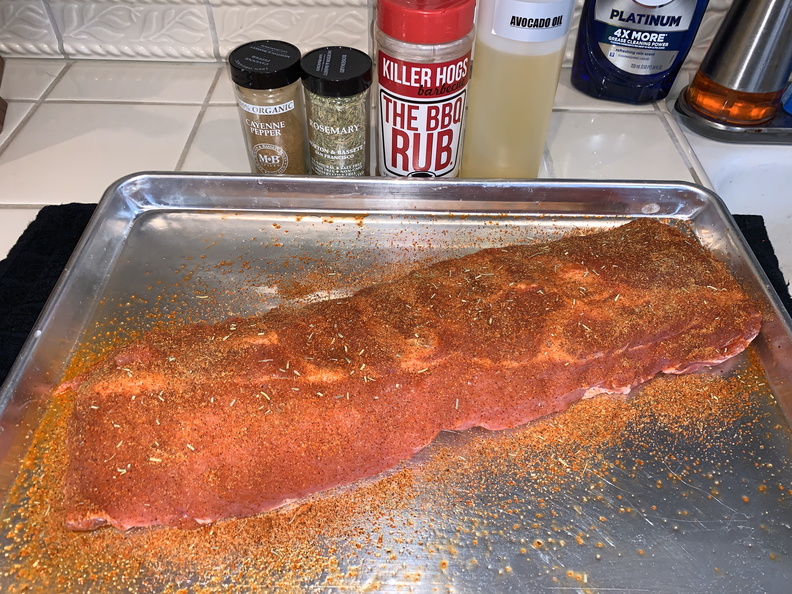 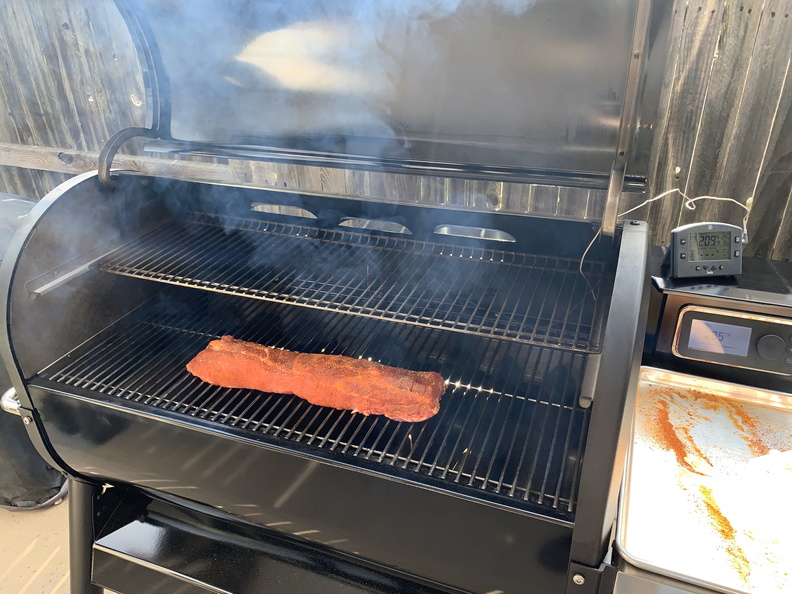 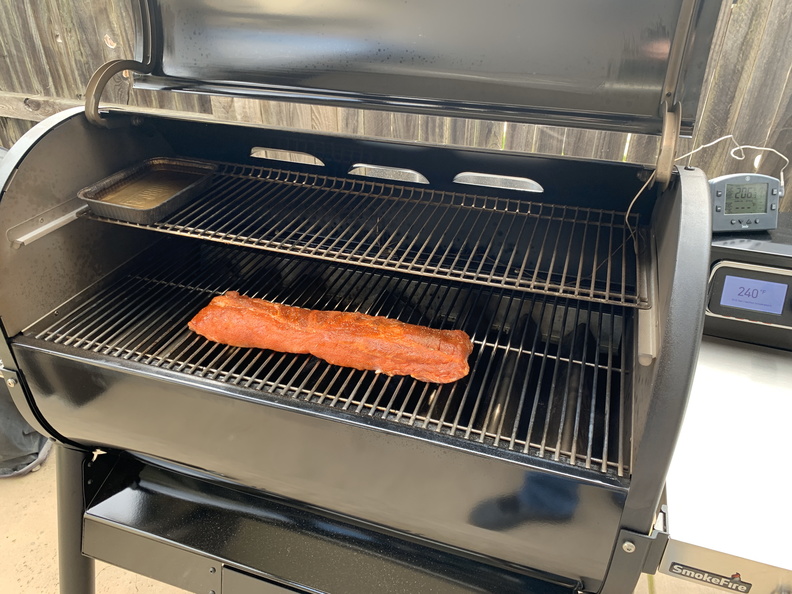 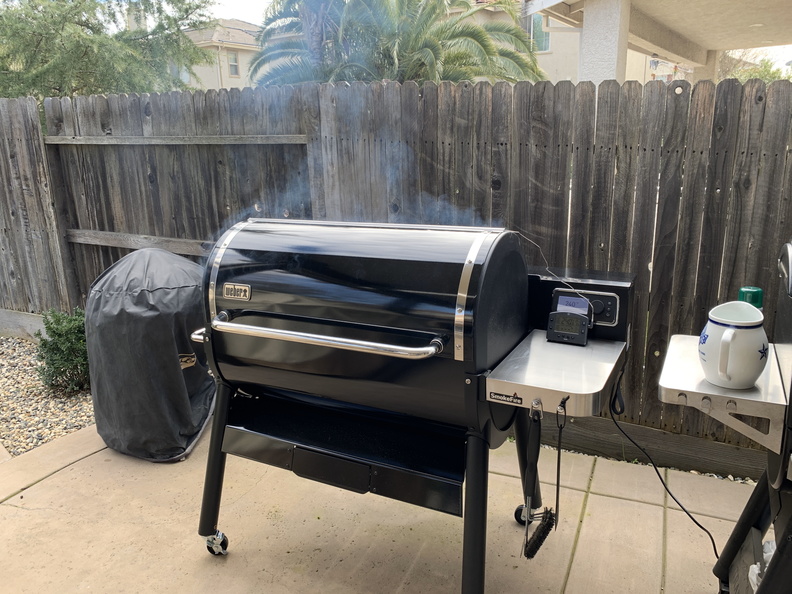 Is it beer 30 yet? Why yes it is. I'm going to head to my favorite local watering hole for a couple of cocktails and a snack while these cook. I can keep an eye on temps remotely from the Thermoworks smoke.

The Weber app stinks at this point. You cannot even change temps on the smoker or at least I don't see how.

It's a good thing I don't live any closer to you. If I did the smell would be driving me crazy.

Well, it looks like it will be a success. I will be anxious to hear about and see the results later this afternoon/evening.

The ribs have been on for about three hours and 30 minutes. I came home and decided to lower the temperature a bit as it was actually holding closer to the set point. When I did this, the controller froze again, so I had to power it off, let it cool down a bit and restart. Thankfully it remained lit the entire time, but that's not very confidence inspiring. 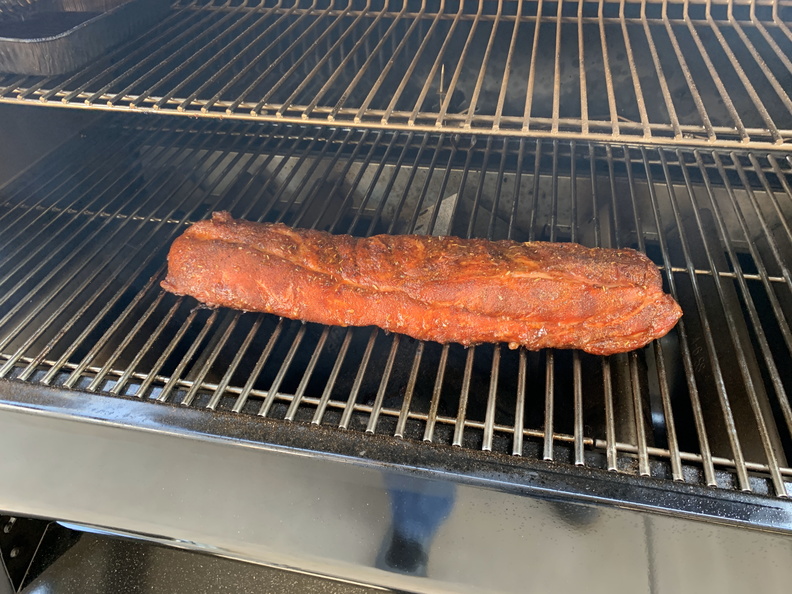 Ignore the right side of the graph above. My Smoke Gateway went offline and I had to reset it too. The joys of technology, but you can see that the EX6 does not hold what I'd call even temperatures. The Timberline 1300 by comparison is really close, like within 5 degrees. I like the smoke output on the EX6 much better though, so we'll see how things go at the end of the cook.

CHECK OUT THEM NEW WHEELS.....

So the casters arrived from Amazon. Being impatient, why not change them during the rib cook? I grabbed my high lift low profile floor jack, a 2x4 and a puck. Piece of cake and took about 90 seconds per corner. 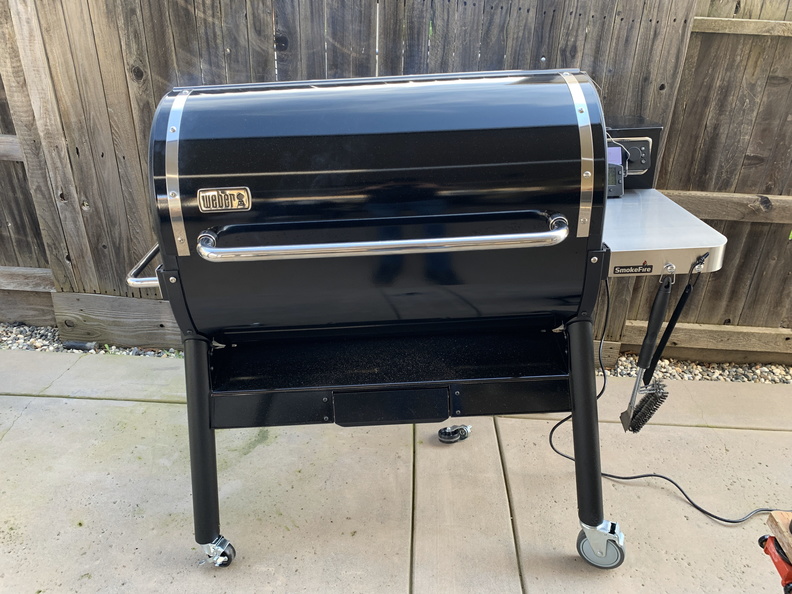 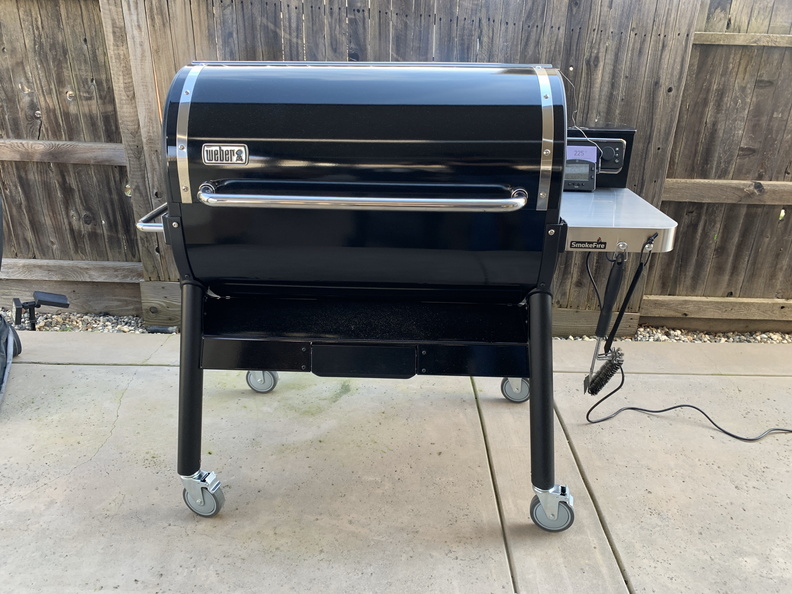 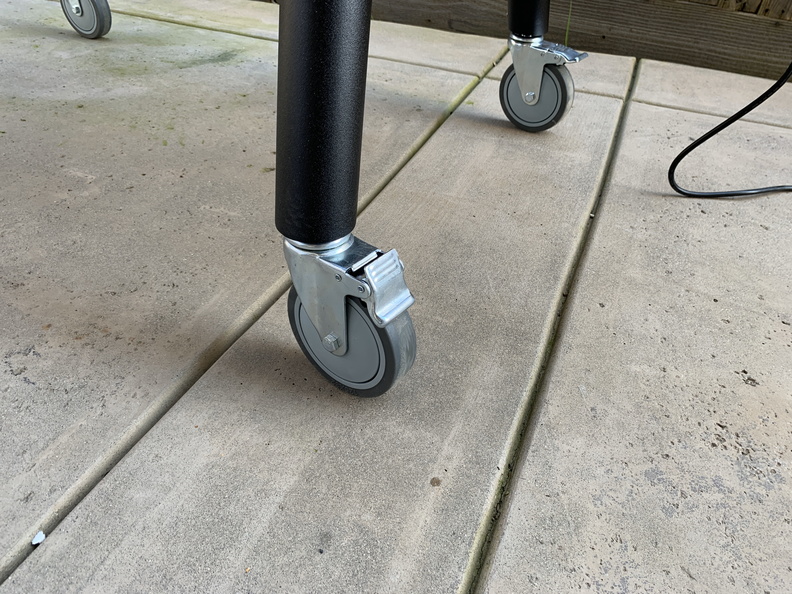 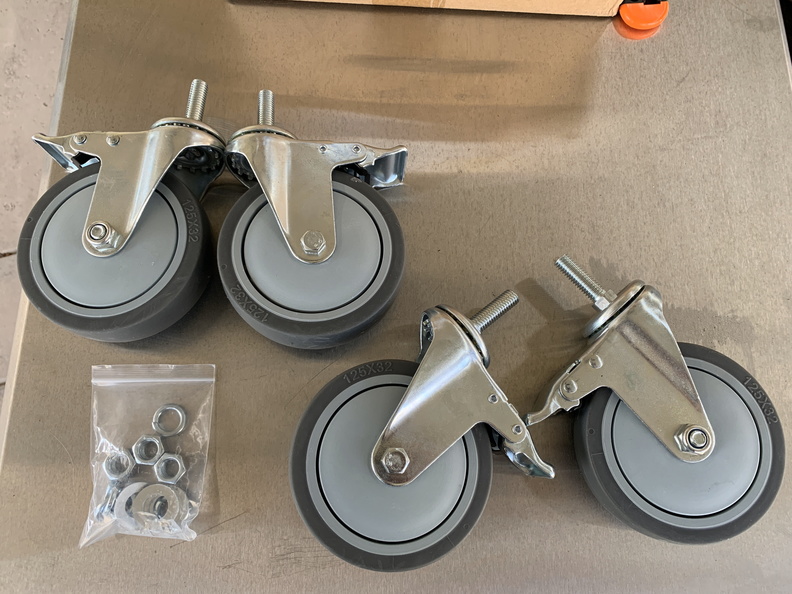 The nice thing is that these don't only lock the smoker from rolling, but the casters also lock from rotating. Again, thread pitch is 1/2-13. The smoker rolls around way smoother and quieter with these.

So the casters arrived from Amazon. Being impatient, why not change them during the rib cook? I grabbed my high lift low profile floor jack, a 2x4 and a puck. Piece of cake and took about 90 seconds per corner.

The nice thing is that these don't only lock the smoker from rolling, but the casters also lock from rotating. Again, thread pitch is 1/2-13. The smoker rolls around way smoother and quieter with these.
Click to expand...

Nice, I’m highly concerned about the controller, can you post a link for those casters.

Bruno said:
Nice, I’m highly concerned about the controller, can you post a link for those casters.
Click to expand...

Me tool I don't know if it's a pattern based behavior related to firmware, or if my particular controller has a hardware issue.

The link is posted above where I called out MODS. I linked to each mod @ Amazon.

I think that will wind up being one of those mandatory mods on any new Smokefire. Post up some links to the wheels and also any instructions or comments regarding installing them. Is a 2 ton jack going to be necessary for the procedure?

DWambolt said:
Me tool I don't know if it's a pattern based behavior related to firmware, or if my particular controller has a hardware issue.

The link is posted above where I called out MODS. I linked to each mod @ Amazon.
Click to expand...

Thanks, the grommet link didn’t work. But I’m in on the casters, was hoping to not have to do gaskets, that’s another bummer.

Bruno said:
Thanks, the grommet link didn’t work. But I’m in on the casters, was hoping to not have to do gaskets, that’s another bummer.
Click to expand...

Sorry about that. I fixed the link. I'll follow up on the gaskets. I'm going to try adjusting the hinges and possibly bending the door/sheet-metal a bit to get a better seal. I did just adjust the door while cooking (loosening the eight torx bits on the door) and it did help a bit.
You must log in or register to reply here.
Share:
Facebook Twitter Reddit Pinterest Tumblr WhatsApp Email Link
Top