I really wish Instagram stuff was not used. I don't have it and don't want it. So I don't see anything from it

LMichaels said:
I really wish Instagram stuff was not used. I don't have it and don't want it. So I don't see anything from it
Click to expand...

IG locks up their pics. Can't be copied or downloaded. Its use their app or nothing. Maybe some with better social media skills than I, know how to copy and save the pic.

It's the middle of the night here and I can't sleep. So, this old thread looked interesting. I was a photo nut in my pre-teens in the 60s while living on a base in Japan. But I got away from it in my high school years, then returned to it a bit here and there, and as digital swept in, it got interesting again. I've used it as a supporting art just technical communication in my other passions like gunsmithing, hunting, hunting dogs, cars, and airplanes, and now, food.

I was having trouble getting appealing pictures of food about a dozen years ago when I was on a forum where they had a monthly bbq/grill challenge with pictures of what you made. Then I read some on the subject. It's the typical, light, color, texture, composition, etc., but some things were pretty scary that commercial photographers were doing to capture a steak sizzling (think motor oil and a propane torch). Let's be clear here, all my food pictures are of real food. LOL.

I guess the one thing that sticks out is that for every "rule" there are many exceptions. Like "shoot from this angle, with light from that angle". I just saw some great food pictures from straight overhead in natural daylight filtering in from a window to a room. But one rule that sticks out that seems to be true across all photography is the rule that says: "if it doesn't add to the photograph, it takes away from it". Keep that in mind for your background and any other things that make their way into your food (or any other) photographs.

Here's some pix, new and old, shot with anything from a point n shoot, cellphone, or pro grade Nikon DSLR. It's all the same. Each one shows a little about what I learned and what I didn't learn. It's enlightening to look at your own old photos once in a while.


This was shot a couple days ago with my Samsung S20 cellphone. It has a great camera. I like the convenience and all the onboard software that fixes the light color and all kinds of things. I wish depth of field was more convenient to control. But it works amazingly well. You can see the gleaming bright red salsa jumps right at you first with its focus right on the nearest area and a thin depth of field, then you start to see the texture of the corn and its moist surface, and finally, the tortilla texture tells you it's really crunchy. That picture makes me want to eat it. BTW, this picture breaks the "rule" about not shooting in fluorescent lighting and pulls it off because the latest greatest phone cameras have such sophisticated onboard processing. 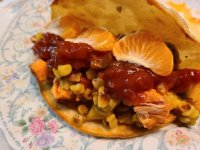 This is an old shot from an old Nikon D300 prosumer camera. You can see the lighting was not color corrected like above. It needed it. The bright red of the pickled ginger and the green of the green onions should pop more. Camera sensors weren't all that great around that time either as you can see the red of the ginger flaring. 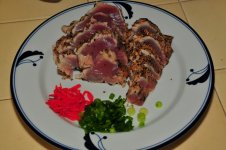 This was with a Nikon D7000, which was a consumer DSLR from about a dozen years ago. I think I used a flash and bounced it off the ceiling in this picture and there was some ambient daylight coming in. It needed some post processing on the lighting, probably could have warmed the color up a little and definitely it needs to be cropped down to get rid of the table and placemat and get you right into the food. That was my seafood platter for an online challenge. 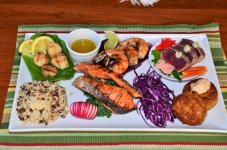 Here's an example of what doesn't contribute to the picture, takes away from it. Bad lighting, bad depth of field, poor composition. That's a pretty good taco by the way. Smoked salmon, shredded cabbage, cherry tomato, salsa, circa 2011. 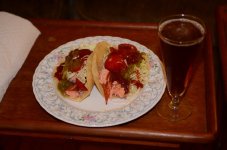 Here's another example of something taking away from the picture. Nobody wants to see my cracked skin and striated fingernails. That taco was a hot mess, but it tasted good. 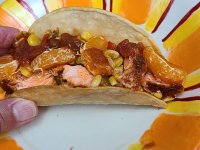