Best Method for using the HeaterMeter on long smokes?

I am doing a test burn using my HeaterMeter for the first time. I was trying a different take on the minion method as describe here: http://www.smokingmeatforums.com/t/...o-mr-minion-but-i-dont-start-a-fire-like-that

Basically the idea is putting the lit coals on the opposite side of the fan and when then fan turns on, the fire burns towards the coals as depicted in this image. Sub the Pitmaster IQ for the HeterMeter in the picture below.

I setup my smoker using hot water in the bowl, and about 10 lit charcoals on the far side. I put everything together and attached the HeaterMeter. It got things to to 225 fairly quickly and held there for over 2 hours. About 2.5 hours in, the temp started to go up and got all the way up to 278 at the highest. I was actually out and about and when I came home I checked the coals. A good majority of them were lit and I am pretty sure this burn will not last all that long and I am not sure the temp will come down on it's own. It has been hovering around 270 for the past 30 minutes.

What is the best setup to get a long burn using this ATC? I am thinking maybe my mistake was not trying to get the smoker up to temp before attaching the HeaterMeter. This caused the fan to run at high for a long time and maybe started the burn too fast? Are the other factors I should look at to see why this got so hot?

How have you had success on using the HeaterMeter or other ATC's to get a nice long burn?

A couple things I do.

1. I limit my max fan speed to 50% so it doesn't try to get it started too fast
2. partially close the bottom vent to further reduce the air intake

The HM can only increase the temperature. It cannot decrease it. So if you are running 278F with the fan off, you need to reduce the airflow causing by convection. The best place to do this is with the bottom vent, if possible. If not possible you can partially close the top vent. If the top vent is closed too much you may get a bittter after taste on the food and it could get sooty. This is cause by stale smoke getting trapped in the smoker.

I keep my bottom vent closed such that without the fan going I run about 20-30 degrees less than my target temp. I then rely on the fan to make up the difference.

It will come quickly where you need to keep the vents.

I light my charcoal as depicted in your post. I use starters that I make from dryer lint and wax. I just put one of the starters in the charcoal pan, light it and let'r rip.
Last edited: Feb 9, 2013
J

Limiting the max fan is probably a good thing. I will try that next time.

Here is my setup. 2 of the 3 vents on the bottom are CLOSED. The third vent, it completely enclosed within the fan attachment I made which has a nomex seal: 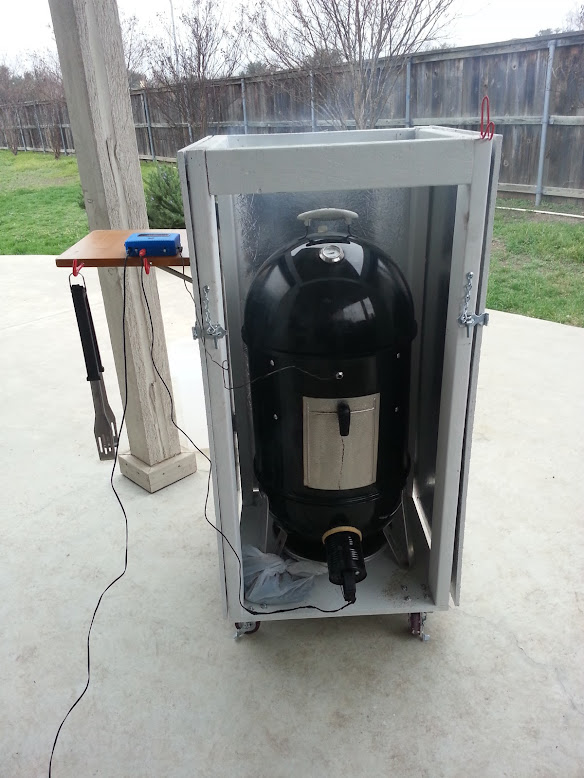 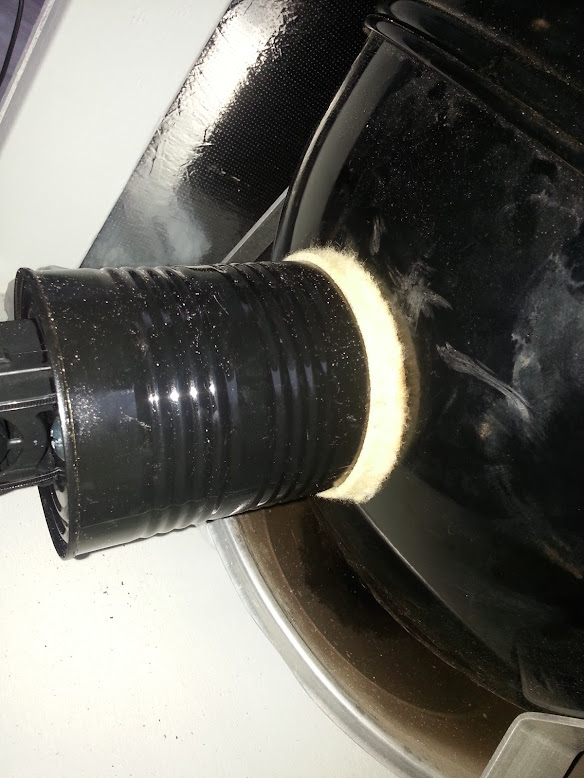 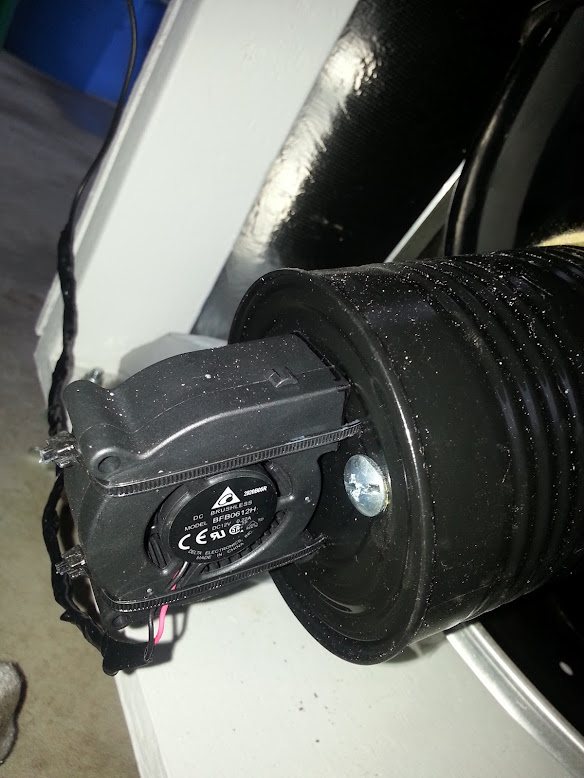 I think little to no air is getting into the smoker from the bottom vents. I think the problem was I tried a different method than the standard minion which has served me well and the coals got lit too quickly because I had fan speed too high.

I have closed the top vent down to half open. Temps are coming down a fair bit. But looking at my charcoal, almost all of it is lit at this point. I have easily done 14 hr burns using the minion so I think they are just got lit too quickly for whatever reason.
D

For my smoker (UDS) with a 1.5" bottom inlet, I run about 280 with the fan not running at all. The issue is that the smoker pulls enough air through the stopped fan to maintain that temp. That is why I close my bottom vent. I want to maintain a temp that is ~20 degrees < my target when the fan is off.

Yes if you get too much charcoal going at once it will run too hot as well, until you cut off enough air flow to slow the coals down.

Ohh, interesting thought Dave. Is that why you are trying to make a damper? So maybe have the bottom vent closed to the amount of what I would normally have it at without the HeaterMeter? Makes sense. I am going to go kill my current trial smoke and load up another batch and try again.

To augment what Dave said, about HeaterMeter can't control the heat if there's too much natural convection, the body of the blower is fairly non-restrictive so natural convection can pull a good amount of air through it. If there's other air intakes, you can easily run into an issue where the fan isn't running at all and the temperature creeps on up. As an example, I was making some pulled pork last weekend and my temperature was passing 250F with no signs of stopping, and 0% fan for the past 40 minutes. Turns out that when I put the meat on, my potholder stuck under the lid and left it open just a crack so air could get in. I pulled out the potholder and the temps dropped and heatermeter went all night right on the setpoint +/- 3F.

I've gone as long as 20 hours on a cook but I have a Big Green Egg so the logistics are a little different. I just hit 3 points on the charcoal for 20 seconds each with a blowtorch and let it do it's thing. By the time I am putting food on, a good percentage of the coals are lit.

I think if there was a flap that closed over the fan hole when the fan was off it would work much better, but I've tried all sorts of purely mechanical designs without a whole lot of luck. The best I ended up with (despite some rather over-engineered solutions) was to tape a piece of cereal box cardboard over the hole so it would partially block the flow when the fan was off. The cardboard had to be pretty small so the fan would be able to lift it when on, but heavy enough so it would close.
D

or use a damper
J

I started a second test burn using the same method Dave mentioned. I took one weber starter cube and lit it in the opposite side. I closed the vent in the fan half way now. It is going well so far
J

Okay this test burn went VERY well. I utilized some half burned Kingsford briquettes from two previous smokes - a real one and the test one. With the used charcoal, I put some new ones in and 3 fist sized pieces of wood. I didnt quite fill the whole ring. I got a consistent 13 hour burn at 225 in PELTING rain. It rained hard enough to wake me up last night, so I put a wood top on my cart seen above.

The smoker got to temp around 10:30 am and at 11:30 it started to lower. It burned through every piece of wood and charcoal. I was amazed at how everything was gone. I have a feeling that with a full basket of brand new briquettes, I can probably easily do a 15-16 hour burn. I was very impressed and so were a few people at church I showed the Android app too and how I could see my smoker through the internet. There was one flare up caused by me opening the door and peeking at the charcoal. The other was an anomaly.

I now have two pork bellies for my first bacon attempt at a set degree of 150. Smoker is doing pretty good at right now is hovering around 162.

On long smokes I open the top vent, and close all other vents. I have the other 2 holes on the vent I have my blower attached to taped off.

I fill the ring up with unlit charcoal, fire up a chimney of lit and toss it on top. Toss wood on and close it up. I wouldn't overthink it too much, it really just "works".
J

What are you guys with WSMs doing with the water pan? Filling it with water? Using a clay saucer? Sand? Nothing?

I've got a piedmont pan setup that I line with foil and use when I do salmon, but running the smoker manually I've always used a single Brinkmann pan filled with water. I'm inclined to use the same setup I use for salmon until the stores around here get their spring planting stuff out (which I'm sure will be any day now...)

Jarrod Igou said:
What are you guys with WSMs doing with the water pan? Filling it with water? Using a clay saucer? Sand? Nothing?

I've got a piedmont pan setup that I line with foil and use when I do salmon, but running the smoker manually I've always used a single Brinkmann pan filled with water. I'm inclined to use the same setup I use for salmon until the stores around here get their spring planting stuff out (which I'm sure will be any day now...)

I used a brinkmann charcoal pan with water as well. However, on my overnight smoke test it had dried up and caused a mess. I am thinking maybe an empty pan covered in foil would be best since the water is there to help maintain temps. Since the HeaterMeter does that itself, it may not need the water.
You must log in or register to reply here.
Share:
Facebook Twitter Reddit Pinterest Tumblr WhatsApp Email Share Link
Top