About 3 weeks ago, a friend that lives across the street and knew I liked to smoke BBQ asked me for my recommendation on what he should buy. I told him about my setup (18" WSM & HM 4.0). I told him if he wanted a WSM that I would build him a HM to go with it. I ordered a couple of HM 4.3.5 kits and built him the HM & Adaptadamper to go with his 22" WSM.
He picked up a Prime Brisket this weekend from Costco and we fired up him cooker Sunday night for the first time. Below is a picture of the HM webpage at the end of a nearly 16 hour cook. No tuning needed in the HM. This was using the default PID settings. His brisket turned out awesome and he couldn't be happier. 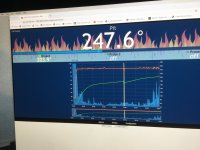 Golly, love to see graphs like that, especially after such a rough start!
T

Bryan Mayland said:
Golly, love to see graphs like that, especially after such a rough start!
Click to expand...