I currently have 3 dedicated Weber performers (one in Vortex mode, one in SNS mode and one in rotisserie mode. Also have large BGE in challenger table. I’m looking to add a Weber Summit Kamado but have a question about possible replacement cooking grids. I LOVE the BGE eggspander 5 piece set in my BGE. I would love to add the XL version to a new Weber Summit. Does anyone currently run this set up? I know you can use XL CGS Woo adjustable system, but I really like the BGE eggspander set up. (Meaning that all my lodge cast iron would also fit between the levels of the grate system.)

I also have a large BGE and have been watching what people are doing with their E6/S6 grills but haven't seen anyone using eggspanders or woos .

At my local dealer, I was comparing an XL BGE with an E6 side by side. Seemed like the height from grate to the lid was a less on the E6 than the XL BGE. I didn't measure it and the shape of the dome on the E6 is different than the shape of the BGE so height at the edges of the grate may be nearly the same as the XLBGE.

Have you called Tom at CGS? I'm guessing he would be interested in solving this even though the weber kamado isn't ceramic as it might expand his market.

And, for anyone not knowing and wondering what CGS stands for, its Ceramic Grill Store https://ceramicgrillstore.com/

oh, one last note maybe edit the subject of your post to include kamado S6/E6 as that might catch the attention of those with one.

I don‘t run this personally, but one of my BBQ acquaintances uses the KJ grate stacker from smokewares.com, on his E6. I’m assuming the bottom is 24”, which is what fits the E6. I kind of like that the top rack can pivot if you need to move it out of the way. 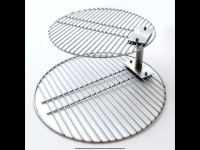 Thanks for the replies so far…So I’m thinking the eggspander may work. No dealers in my area have both (Weber or BGE XL together-not even a Weber summit E6 last I checked. I guess the best bet would be to call Tom @ CGS and ask him about Woo ring etc.

I might stop in at my BGE and weber dealer this week and if so I'll take a tape measure for the lid clearance.

I'm curious why you are looking at an E6?

Edit. I guess what I'm asking is what are you wanting an E6 to cook that you can't cook already?

@Brett-EDH have you added a second layer of grates?

DanHoo said:
@Brett-EDH have you added a second layer of grates?
Click to expand...

I am not running any grill expanders. I looked into them and haven’t really seen a need yet with my cooks.
S

DanHoo said:
I might stop in at my BGE and weber dealer this week and if so I'll take a tape measure for the lid clearance.

I'm curious why you are looking at an E6?

Edit. I guess what I'm asking is what are you wanting an E6 to cook that you can't cook already?
Click to expand...

just like to grill on different things, plus it would allow me to smoke more things at once? I have a 3k+ Weber stainless gas grill that I use to store my other grills’ accessories. Guess more toys…. I had a traegger once but gave it away. I like to manage my cooks.
C

I’ve heard that the Big Joe expander works in the Summit but I haven’t purchase one yet. Yeah, figure I’ll get the Summit E6 next spring…then measure and call CGS and see what works. Thanks!
P

I have a large BGE and love the eggspander and also have a WSK S6 so contacted Tom at CGS to understand what of their products fit the S6.
He advised that their KJ BJ expander works well. 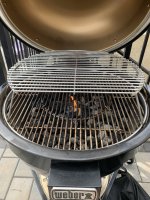