I got to spend some time in Charleston SC this week, which is a really cool place to go visit. Lot's of history and good food there. Rodney Scott's is a pretty popular place. Mr. Scott has been on some food network shows and was featured by Netflix in an hour long documentary. He seems like a pretty solid guy so I had to go see what it was like. Unfortunately the "house specialty" didn't live up to the hype. My whole hog pork plate came out cold, the beans were OK, and cole slaw was nothing special. I think it would have been a different story if the food was served hot. The vinegar sauce on the table was very good. I also tried a little brisket (it was good, but not great). However, the chicken wings WERE AWESOME. I took some pictures to share with everyone too.

I think we all have pretty dang high standards on the forum, so I'm not wanting to seem negative here - just honest. Not sure I'd go back again, but I do admire what Rodney Scott is doing and it is a really neat place to visit. Maybe I was just there on an off night.

Outside of the building 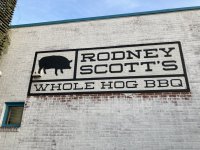 Smoke stack, and drive thru order board! You can peak inside thru the windows and see the guys working around the pits 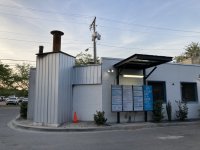 Rodney has a lot of outdoor seating. 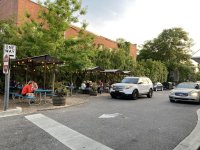 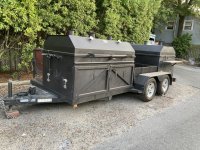 On the inside, the line moves quick, menu had pork, brisket, chicken, and most if not all of the southern style bbq sides. 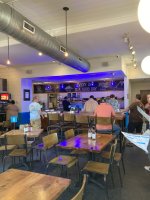 Here's my plate before things got serious as mentioned the chicken wings were really good. I think they were smoked and then re-seasoned and then flash fried.... SO GOOD. Pork would have been a lot better if served hot. 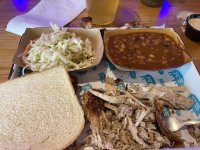 No problem with me for a negative review, I like honest over hype. There was a time, I reviewed a local joint and gave my honest opinion on the ribs and I got some pushback from a member who asks me if I'd taken my complaint to the owner rather than post here on this forum

I've heard a LOT about Rodney Scott's. He gets a lot of favorable media. And several joints in Texas are trying to emulate his whole hog. Apparently its a thing in Texas barbecue these days to do a whole hog on Saturday or once a month.

I had my doubts that whole hog was really all its built up to be.

If I visited Charleston, I think I'd hit John Lewis's place.

I really would love to check out some whole hog. I've never had it. That's one of the places on my list. Thanks for the review!
J

Dustin Dorsey said:
I really would love to check out some whole hog. I've never had it. That's one of the places on my list. Thanks for the review!
Click to expand...

If you get to East NC you’ll find some great whole hog BBQ restaurants. I’ve had whole hog before and really liked it.

I went here with my wife in November and was slightly disappointed. I got the ribs which were rather dry. Wife got the pulled pork which was pretty good especially with the vinegar sauce. The colelsaw left a lot to be desired, but the mac and cheese was some of the best I've ever had. Looking back I should've gotten pulled pork at a place known for whole hog. Maybe I caught them on an off day. It was real cool to see Rodney in person though!
You must log in or register to reply here.
Share:
Facebook Twitter Reddit Pinterest Tumblr WhatsApp Email Share Link
Top