Decided to fire up the Smokefire tonight and do some pizzas. I just picked up a new pizza pan, and after seasoning, wanted to give a shot. Nothing too fancy, store bought dough mix, jar sauce. It works for us though and they always come out great. I usually run them around 450F, for about 12-15 min. I added some of the basil and oregano that we have growing. Put a stainless baking pan on the top rack to reflect some heat back down on the pizza for browning the top. Worked pretty well, though I think that next time I'll rotate them a little more to even out. With the pans above them, the tops and bottoms browned up around the same time. We tend to make them more of a thin crust though. 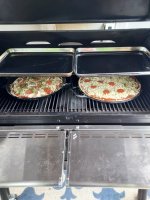 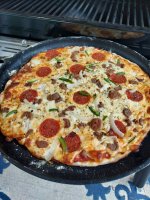 Charlie -- you can't post pizza pictures without giving us the photo of the leopard spotted bottom.

Clever use of the upper rack to get the tops cooking. The look great.

Those look so good!

Thank you all very much. The first time that I did them on the Smokefire, they came out good, but the tops didn't brown very much, and I really like getting some browning on the cheese. The pans seemed to help with that some. The one on the right in the Lodge pan is just cheese with pepperoni on half, for my wife and son. I like more of a meatlovers style, though I was out of bacon this time.

I know, I know. it was a sad day. I used sausage and pepperoni though, along with onion and green pepper. I also found that adding just a little cheddar cheese to the mozzarella gives it a unique flavor. I was using a skillet for mine, but wanted something a little bigger, so I got a cheapo pan from Home Depot, as Lodge doesn't make this particular style anymore. It's not the greatest, but it will work for the $18 that I paid for it. We're not pizza snobs by any means, we like what we like and convenience is the key, and the Smokefire has made that even more easier. Sometimes we'll delay dinner in the summer until after dark and make these on the grill for a late supper around the firepit.

Tried a couple take and bake pizzas tonight, I still used the paper pans they came in with a bit of foil under them so they didn't burn. I stuck a pizza stone and a baking sheet on the upper rack. The pepperoni one got nicely brown on top probably because things had more time to heat up since it was the 2nd pizza. Still experimenting, but this method turned out really well.