I took a couple slices from the three briskets I smoked the other day and came up with this little creation that was so delicious that I HAD to share it with you guys.

When I trimmed off a bunch of fat from all the briskets I smoked the other day, I filled up my 8-qt. Dutch oven with most of it, popped it in the oven and made beef tallow. I mention that, because I took some potatoes, sliced into 'em a bit to allow them to steam during the cooking process, and rolled them in the warmed up beef fat in my cast iron skillet. I added some salt and popped 'em in the oven at 375 degrees for an hour. Probably the best baked potatoes I have ever made. 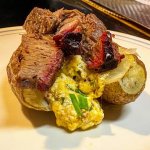 Quick note: when I made jalapeno poppers for a big event the other day, I had some leftover cream cheese in a bowl. I'm calling this 'recipe' a 'guide' because I can't say the exact measurements to be accurate. I probably had around 3-6 ounces of cream cheese. The cream cheese had been mixed in a bowl along with some shredded Mexican 4-blend cheese with a generous dusting of Meat Church Holy Voodoo rub.

-- I sliced'n'diced two jalapenos (deseeded) and cubed up about 6-8 ounces of Colby Jack cheese.

-- I fried about four slices of bacon in a different cast iron skillet (vs. the one I used for the potatoes). I removed the bacon, sat aside, and drained some of the grease, crumbling up the bacon afterwards.

-- After that, I sauteed the jalapenos. I was hungry and in a hurry, but sometimes for this dip I'll dice half an onion and add it as well as two or three cloves of minced garlic. However, I did add some dashes of garlic and onion powder respectively.

-- Following that, I had the heat on medium low, and I added the cream cheese mix mentioned above, and whisked it up. Moments later, I added about 1/2 cup or less of chicken broth. Continued whisking before adding the cubed Colby Jack cheese. I let it heat up and melt into the mix. You can roll the cubed cheese in a little bit of corn starch to thicken the dip up if you want, but I never do, because I like the consistency as is.

-- By this time, the potatoes were done. I popped the skillet with the cheese dip into the oven, set it to broil and allowed the top to brown. When I took it out, I added the crumbled bacon as well as some chopped green onions.

I threw some butter inside the potato, added the dip and brisket, and man oh man was it good!

Oooh. Beef and potatoes. Now I know what to do with the fat I trimmed. Thank you. Reminds me of the old, old McDonald fries.

Another wow! One of the prettiest shots I've seen in a while. Like the sound of that cheese dip too. Nice work Troy!

Troy S said:
-- I sliced'n'diced two jalapenos (deseeded) and cubed up about 6-8 ounces of Colby Jack cheese.
Click to expand...

Thank you for using real cheese and not that godawful Velveeta crap.

I appreciate it, everybody! Thank you. Highly recommend giving this a shot.

Brad Olson said:
Thank you for using real cheese and not that godawful Velveeta crap.
Click to expand...

Haha! Yeah, Brad, I'm not too wild about Velveeta. Sometimes I wish my tastebuds' 'perception' could go back to the days when I ate junk like that, and I say that because my family is awful big on Velveeta. Fairly frequently, I make a big ol' pot of mac and cheese -- I make a roux with a stick of butter, some flour and 4 cups of milk to finish it, with about 24-28oz. of cheese (usually a mix of sharp cheddar, colby jack and some pepperjack). A few family members complain, because they like the way someone else makes mac and cheese with evaporated milk, Velveeta and cheddar mixed. Ugh.

I do have to admit something, though. Back in June or so, I joined the 'smoked queso' craze and I did use 32oz. Velveeta. Hey, look, I was just wanting to taste what everyone else was in this wild queso craze. I'm definitely going to make it again, but next time without Velveeta.

Now, I do gotta say, too, I don't mind some good ol' American cheese on my burgers and -- to a lesser extent -- cheesesteaks (when I don't have any provolone)!

I will take that plate!!! Looks awesome!!

That is an amazing cook. I love the meals and lunches I make with the leftovers from my BBQ sessions. Pulled pork tacos, tritip sandwiches, pulled pork and homemade Mac and cheese in the same bowl, and chicken enchiladas are some of my favorites, but that cook of yours is next level!
You must log in or register to reply here.
Share:
Facebook Twitter Reddit Pinterest Tumblr WhatsApp Email Share Link
Top