It's been a busy couple months and with the way workload has been, I've worked both the MLK and President's Day holidays. Things are getting back to a somewhat normal level, so Friday, I made up for it and took one of my unused holidays. Decided to do some baby backs. I made a rub which (as many of my rubs do) started with the leftovers of the last rub I made - Chris Lily's Championship rub. To that, I added a batch of BRITU rub. Fired up the WSM with about 1/3 of a chimney of K-Pro and a large chunk of apple wood. Temps sat right at about 240 for the entire cook. I was hoping to get around 275, as we had rain moving last night and I wanted the WSM to have time to cool down. No such luck, and the rain actually arrived a few hours before I had planned. I got the ribs on around 3:30 and by 6:00, scattered drops started to show up. By 6:15, it looked like it might get heavier, so I shut the WSM down and moved the ribs to the far left side of the Genesis, with just the right burner on medium. Temps got to 300, so I knocked it down to medium low and it settled in at 250, where it sat for another 45 minutes to finish. For sauce, I had some Piedmont sauce that I modified with some extra ketchup, molasses and brown sugar. Worked out great. Also did some homemade Mac and Cheese with diced green chiles and a salad. Mac and cheese was excellent, but the amount on my plate is probably double what I should have had. It's very rich. All in all, a good meal - nice to have that Genesis. 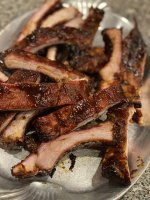 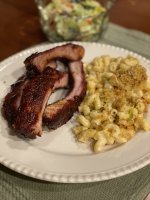 Nice save with the Genesis! Those ribs and Mac n cheese look delicious. Now I’m hungry!

Jim,
Those are some great looking ribs. The clean cut with the smoke ring and the little bit of glazed saucing, man oh man! Mac and cheese is so good with bbq. Great cook!

Beautiful plate of ribs, Jim. Way to work around what Mother Nature had going. Beautiful pics; I love the narrow depth of field.

Why did you ruin such a great meal by adding salad?

Nice save and cook, ribs look great Jim. Like the looks of that M&C also.

For anyone who's interested, here's the M&C recipe. For me, it was a little 'flat', but I used a pre-grated gruyere, which may have been a mistake. I added about 1/2 tsp of Gulden's to the cream/cheese sauce and that brightened it up nicely without giving it a mustard flavor. 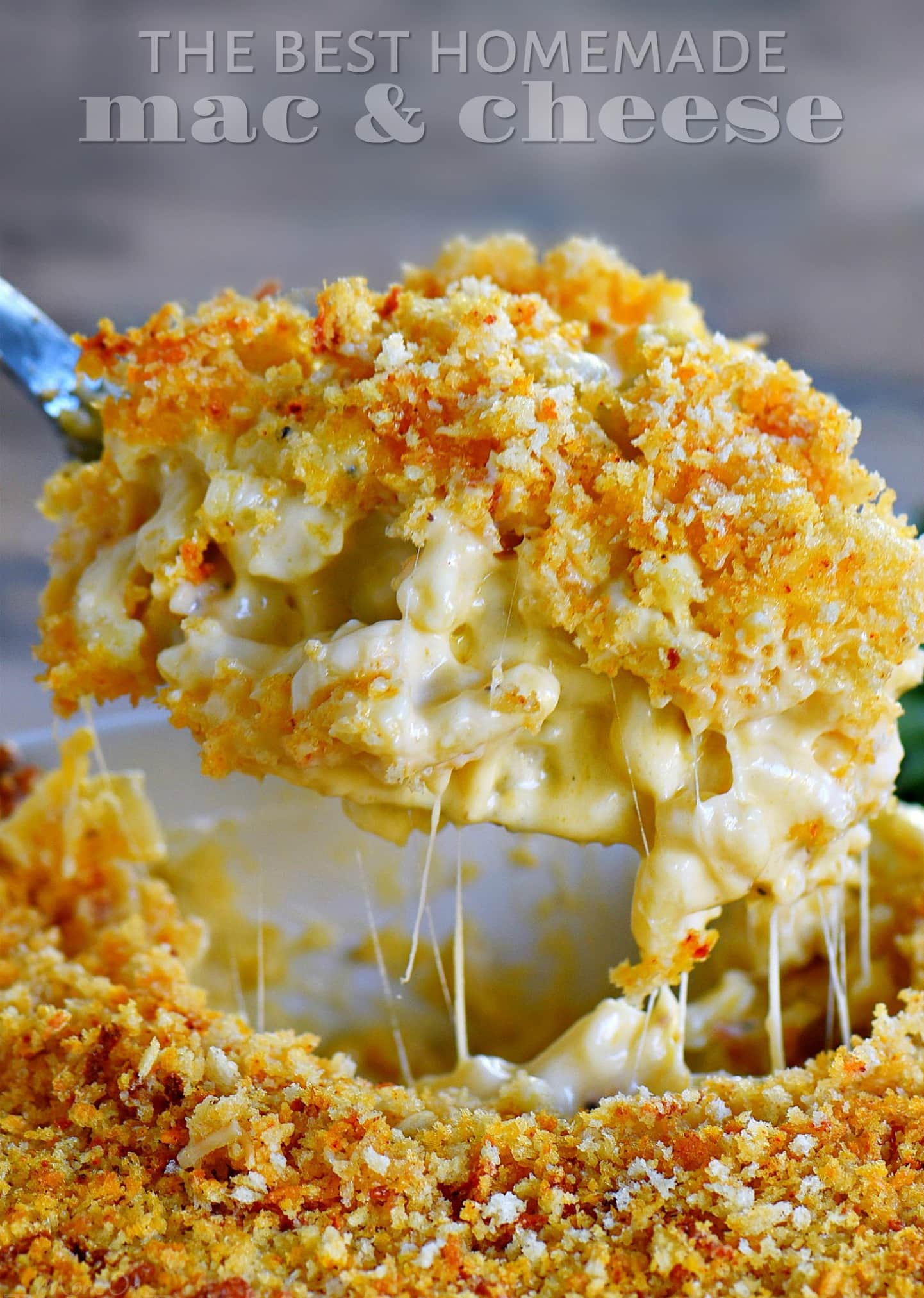 The BEST Homemade Mac and Cheese of your LIFE. Outrageously cheesy, ultra creamy, and topped with a crunchy Panko-Parmesan topping. Definitely a keeper!

Jim, thanks for sharing the recipe will be giving it a try soon.