I did this a couple of years ago on a particularly hot day (POSTED HERE), and with the recent heat here, I used this setup to bake my weekly bread batch again. Pretty much the same setup..... Step one, roll out ol' Red and get some briqs going 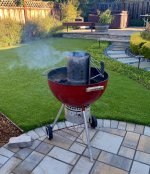 Once those were lit, they were dumped over about 2/3 of a chimney of unlit charcoal that was spread in a 3/4 moon around the outside of the kettle (trying to keep direct heat on the stone to a minimum). Stone in, lid on, and preheat for about 35 minutes. Thermo was at 495 on the KP, and the stone was temping around the same, so I slid the slashed loaf onto the stone, and covered it with an inverted roaster to trap steam for 20 minutes 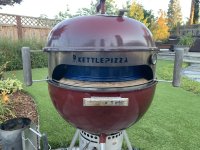 Removed the roaster, rotated the bread 180 degrees, and let it go another 25 minutes (with a rotation about halfway through) 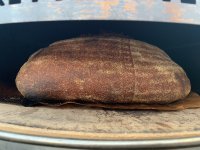 You can see from the above pic some signs that there's too much bottom heat (hint, lower left corner), and indeed the bottom of this loaf took a bit of a beating. The bread is just great, and for those who don't like a little extra flavor on their crust, well, the bread knife makes quick work of that! 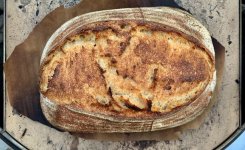 I was able to keep loaf #2 from burning on the bottom by placing both my round pizza tray as well as one of my pizza peels under it after the first 20 minutes where it was covered. This tempered the delivery of heat from below enough that, while darker than my oven loaves, was not close to burnt.

Yesterday hit 108° (not a huge deal for some of you, but that's the highest number I've seen on a thermometer since we moved here in 1998.) We also had our first close fire of the season in the county park that's less than 2 mi away......huge response from many local fire departments and Cal Fire got it under control quickly, though there were evacuation orders given before containment. 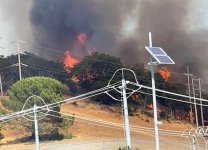 Stay safe out there folks!

Pass me some kerrygold butter and a warm slice, please. Looks delicious, as always!

106° here yesterday. And this is going to be a rough fire season from my readings.
J

I baked the bread the day before, Joan......not that I wouldn't have baked yesterday.....

BBQ Bread, what will Rich think of next?

ChuckO said:
BBQ Bread, what will Rich think of next?
Click to expand...

I keep trying to smoke spaghetti.....falls through the grates!

Great bread, Rich. I can't even do that inside.

Tim Campbell said:
Great bread, Rich. I can't even do that inside.
Click to expand...

I'm with Tim on this one - That bread looks perfect - yum -

Where are you getting 108 degree temps in the Bay Area?
That’s freaking knarly .
It gets hot in Danville too and that’s one of the main reasons I want to ditch that place.
I’m returning the the Bay for some business and I an honesty kinda dread it.
I’ve been living at our cabin for the last couple of months and it’s been high 60’s to low 70’s .

Where are you getting 108 degree temps in the Bay Area?
Click to expand...

I'm in Redwood City near Canada College. It was darned hot!!!

Super response from local FD's and CalFire saved a lot of homes!

Rich, was that fire-photo taken from outside your home???

Tim Campbell said:
Rich, was that fire-photo taken from outside your home???
Click to expand...

That was taken from the freeway that's on the other side of the hill from me. Here's a map (the map doesn't accurately show the 20 acres of the fire, but it was virtually all in Edgewood Park). It's worth noting, by the way, that another of our members here has a family member who was close enough to be evacuated (all safe/sound), we were not even issued an evacuation warning. 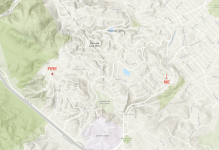 Thanks, Tim. We're all good. 95% contained, no wind today, will be fully out tomorrow. All Evac orders and warnings were lifted yesterday.

I second Tim, be safe Rich!