My "go to" whenever I make beans!
K

Made a double batch this weekend and served at 2 different parties at my house on sat/sun... Omitted the brown sugar as the rub I make (SYD ) has a good amount of sugar in it.... Loved these beans. a nice switch from "regular" recipe... May try the peach pie filling next time .... A nice way to use up some PP as well
M

I just made these tonight as a side item and the whole family raved about them. Just delicious!! This one is a keeper.

I made these beans last weekend to compliment my first time smoke of St. Louis style ribs. I made mine with apples (not apple pie filling), Sweet Baby Rays sauce, a 55oz can of Bush's Baked Beans (original style), Meathead's Memphis Dust for the dry rub and about 12oz of leftover smoked BB I had in the fridge. Otherwise I followed the recipe exactly as shown by Keri.

My take? A bit too sweet for my taste but otherwise delicious. I mixed in a bit (maybe 1 tablespoon) of the Fat Johnny's Bastardized Piedmont Sauce to my serving (about 1 cup) to add a bit of acid and cut the sweetness and they were great. My version of the Piedmont sauce does not include 1Q of apple cider vinegar as shown in the original recipe. It's just too acidic. I used closer to 1-1/2 or 2 cups instead and prefer it that way.

I will definitely do them again but maybe eliminate the brown sugar from the recipe to cut the sweetness. I'm also interested in trying to make it with fresh peaches which sounds great!

This is an always go to base recipe for me for over 10 years.

I use a BIG heavy aluminum cake pan and let the ribs, brisket or shoulder drip in - else leave it on the top rack and
add drippings in manually. They smoke very nicely regardless of which tier they are on. I'm typicall using a simple 18"
WSM with a stacker.

I make it my own.

It's a great reference recipe.

Just made some a few days ago while breaking down 4 cryovac whole spares.

I like washing off the sauce of the canned beans before hand and removing any fat or non-bean solids. I'm really just after the beans pre-cooked in a sweet base.

Else I'll cook my own beans from dried.

I mix in my own rub and jux etc from the given cook along with seasoned grilled chopped trim from the spares (chef treats).

I do add a can of unseasaoned pie filling, washing off the sauce and chopping (like the beans) or adding fresh grilled apples. I like using my own sauce or subbing in Head Country original.

Must have made these 50 times with different tweaks that went with the cook. Always get great feedback.

So again - a great base recipe, but make it your own.

I appreciate seeing this linked in a thread under the Barbecue Restaurant Directory... and just in time for a shot at making these for Thanksgiving!
C

Just made these for dinner, they are amazing!
G

Hello All. I haven't posted in a long while. I do occasionally pop in to refresh my memory about some recipes and techniques. Just bought all new innards for my WSM so I'll post some pics of my first cook. I just realized that I have been making these beans for 15 years. I can never throw a bbq or even go to a bbq without them. Whenever I attempt to change things up and use another recipe, I am always asked to go back to Keri's beans. I always make more than I need and freeze them, that way I always have some and I am not making beans throughout the entire summer.
R

Yes, same here - It's a classic. Thing I modify is the meat trim I toss in. I have the big heavy aluminum cake pans I use to make large batch and catch the drippings from whatever is cooking. I have also used fresh apples/filling to good measure as well if given the time. As mentioned above if I am using canned filling I rinse it first.
G

My favorite is to trim spare ribs to St. Louis, smoke the trimmings and the ribs on the top rack with the beans underneath. Then add the trimmings to the beans, they are a meal in itself.

Gerry D. said:
My favorite is to trim spare ribs to St. Louis, smoke the trimmings and the ribs on the top rack with the beans underneath. Then add the trimmings to the beans, they are a meal in itself.
Click to expand...

Yes - exactly what I do. Smoke the trim on top rack, pull it when tender through with a skewer, chop and dump the trim into the prepped recipe and smoke under the ribs, etc. My favorite pan for this is the Parrish Magic LIne 14x3 as it just fits nicely in the standard Bullet. But any heavy 14x3 pan works. Out of stock on Amazon but here's a reference: ref=cm_cr_arp_d_product_top
Last edited: Jun 16, 2022
E

I saw this thread pop up yesterday. I will be getting the groceries later this morning. The grocery list includes unusual items like ... apple pie filling. ;-)

Looks amazing! I have not tried it yet but, soon!
B

These beans are to die for. They are very popular when made with Peach Pie filling, also.
E

We made Keri's Hog Apple Baked Beans according to the recipe for 4th of July at home. See this post:
https://tvwbb.com/threads/what-you-cooking-for-the-fourth-of-july-weekend.91743/post-1048485

We decided to make the full recipe for our first time. We were reluctant, because the recipe calls for two (!) cans of Bush's baked beans. That's a lot for us. At the time, we figured that we would share half with my mother-in-law. That did not work out, see below.

Copying from my post in the other thread -
How we prepared our version of Keri's Hog Apple Baked Beans:
We used a 12 oz package of Great Value (Walmart) "premium sausage links", KC Masterpiece BBQ sauce, and an Urban Outfitters "Texas" rub that was a gift to us. We used only 1 teaspoon of cayenne, and the next time we will cut down to 1/2 teaspoon. Our cayenne was fresh (dried cayenne from the store, recently purchased) and the beans turned out okay. We ruled out plans to share half with my mother-in-law; it would have been too spicy for her. We cooked the sausage first, then the bacon, and finally the onions and green pepper, which practically floated in the bacon fat. I removed and "drained" the cooked onions and green peppers with a slotted spatula. Some of the bacon fat went along with the onions and peppers into the beans. We could have drained them with a colander or patted them with paper towels, but we assumed that the recipe expected some bacon fat. It was thick, not runny when we first mixed it together, so we baked it with the lid on the pot. The grill thermometer temperature was 325 for 50 minutes with the pot lid on, then a final 10 minutes with the pot lid off.

Our Review:
The beans were very good, but not great. Based on everyone's enthusiastic responses here, we expected something beyond special. It was very good, and we will make it again, with modifications. It was not "knock your socks off" great.

Not to disparage the uniqueness of Keri's recipe, but my partner has been making "Western Beans" for decades. She learned it from her mother and serves it for dinner from time to time. The ingredients are nearly identical. The differences between Keri's recipe and the one my partner makes are:
What we would change in Keri's Hog Apple Baked Beans, the next time we make them:
P.S. Added later, after reading the above text to my partner:
She says that the beans had a delightful "grilled" flavor that is not present in her "Western Beans", which she cooks on the kitchen stove. We think it might be the addition of bacon and bacon grease in Keri's beans. My partner mentioned that she might add a drop or two of liquid smoke when she makes Western Beans the next time.

P.P.S. Just curious, but where is Keri today? She has not visited on this website for several years. 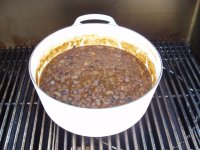 I made these for Saturday dinner, I omitted the 1/2 Cup of brown sugar and I would halve the amount of bbq sauce.
I was hoping for something more complex but, it all just became rather muddied and overly sweet. I might try it again but, it wasn’t the end result I’d hoped for.
You must log in or register to reply here.
Share:
Facebook Twitter Reddit Pinterest Tumblr WhatsApp Email Share Link
Top