I saw something today that will BLOW YOUR MIND!

TonyUK said:
Nice. Should have been in silver to really make it pop.
Click to expand...

Maybe sandblast off the porcelain and coat with high heat clearcoat? And definitely find a generic vent for the top.

Jon Tofte said:
Maybe sandblast off the porcelain and coat with high heat clearcoat? And definitely find a generic vent for the top.
Click to expand...

I like the design, but I think they could have done better to pay homage to the Original '52.
How hard could it be to have put a sheet of stainless into the jig and press out a lid and a bowl?

Tony,
Do you really think the original was stainless? I don't really know what they made those boueys out of, maybe stainless or galvanized steel? It's hard to tell from the pictures of a real original.

Most of the old bouys were made out of galvanized but, doing this “Homage” would have been much more “mind blowing” in Stainless.
But, not available to the general public?

They had one like it on display at their StL restaurant, before it closed. 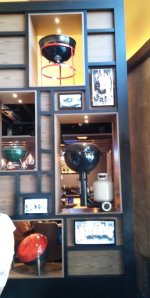 I have seen pictures of similar at another Weber Grill location. They really would be doing something to offer to us collector types!

I read somewhere that they have a original in the lobby at Palatine IL.

Jon Tofte said:
I did a quick watch of Harry' video. It is cool, maybe not mind-blowing, but cool. I think Weber should offer the lids and frame (the latter would be pretty easy to replicate) to other collectors. I was disappointed that they just used an old 3-hole bottom and didn't replicate the original with just one vent. And that new style Weber top vent does kind of stand out like a sore thumb. But, still all in all, it is still a very cool item. I have to wonder why Weber said that it was only a display item and not for cooking. Harry seems ready to fire it up - I hope not on his poor little dog!!!

Really, the one hard thing to duplicate in what Harry got is that lid. Come-on, Weber, offer them for sale as a novelty!

If you're just trying to get that look, you can buy tank heads in a similar shape, either hemispheres or elipticals. For the bottom, I would think the grate has to be sunk down a bit further than a contemporary kettle. But a replica will always be a replica. If they were galvanized, I wouldn't use it.

They could easily do a silver porcelain enamel and it would look much better. Personally I’d also take the one touch cleaning system so it could actually be used.

Weber went to black very early on. I would be ok with black with a plain vent on top. The lid is the hard part. If Weber would just sell that, it would be really nice.

I don't know Chris good enough to know what it means when he likes a comment I made like this........
I was looking for answers, like if there was more to it or was that really it.
Based on the video being pretty short and basic and not really saying much, and now Chris's reaction I want to believe my mind will really be blown....... any taker on this?

Jon Tofte said:
Tony,
Do you really think the original was stainless? I don't really know what they made those boueys out of, maybe stainless or galvanized steel? It's hard to tell from the pictures of a real original.
Click to expand...

Jon. No. I would hazard a guess that the original was galvy. However, if you're going to produce a one-off in homage to the Mother Ship, smash it out of the park, crap in yer hat and thump it with a stainless steel number.

Staff member
So...yes, this is what I saw that blew my mind. I received a text message from Harry Soo on Saturday morning, August 21, which is unusual because I don't get a lot of texts from Harry. It shows these two photos and says, "I'm open(ing) a box that Weber sent me" 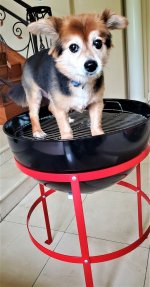 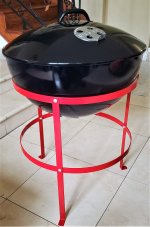 So I call Harry and we discuss what this is and theorize about why he received it...basically, during his numerous visits to Weber teaching classes and participating in influencer sessions, he's been telling the execs that they need to bring back the old buoy kettle. Harry figures that his constant badgering finally paid off and that perhaps this replica kettle is a thank you for his contributions to Weber. We both recognized this to be similar to or the same as the replica kettles seen at The Weber Grill restaurants, and the fact that it came in professionally designed packaging, not hand-packed as a one-off item, implied that this was not a one-of-a-kind object but rather something Weber had manufactured in quantity. The only question was...was this something new coming to market that regular folks would be able to buy, perhaps a limited edition item like the Glen Blue and Red kettles of recent years.

Mind you, at this point in August, we had not heard of the 70th anniversary kettles, so we weren't think of this as part of that collection of kettles.

We discussed the idea that it would be fitting for Harry to cook some of the old recipes from the early Weber kettle brochures, so I sent him PDFs of the brochures I have posted here on the forum. Again, at this point, we did not know (as pointed out in Harry's video) that this kettle is not intended for actual cooking. Only time will tell if Harry actually cooks on this thing.

So, I was really jacked after talking about this with Harry and I knew he was going to make a video on it. I was excited to think that maybe it was something coming to market in 2022, even as a limited edition. And my enthusiasm caused me to make the FATAL MISTAKE of posting this thread! I assumed Harry would reveal this kettle within a few days, but it took him 48 days! I'm sorry for the grief that caused some of you, it wasn't my intention to tease the situation for such a long time. Finally, I broke down and contacted Harry and told him about the mess I'd created, and he came back with the quote I posted on September 26.

Now, jump forward to September 28. I'm corresponding with Tom Fuller at Weber about taking down those 70th anniversary kettle images and I asked him about this replica kettle. He replies, "Let’s just call this a special request from a friend of Weber. These are replicas of George’s original kettle, but are not planned to be sold to the public anytime soon."

And now today, October 8, we finally get Harry's reveal video.


In conclusion, all I can say is I've learned this lesson: I will never again tease something like this where I don't personally have control over the timing of releasing the information. I know a lot of your replies were good natured, but still I could tell there was some underlying frustration and I don't want anyone feeling that. Sorry, it won't happen again!

From my perspective, it would appear as though all of us had a little fun, while just a touch at your expense.

It's not often you get to tease the boss just a little bit.

I had fun, no hard feelings here, I see what happened and I get it.

Hi Chris - thanks for sharing the detailed background and what led us to this point. It happens. We all are probably guilty at some point of getting excited about something and reacting quickly with good intent. Don’t worry about it.

No sweat Chris. I guess you were excited about this as we are. All good mate.

So I guessed right back on Sept 25?
That never happens lol.
C

All in fun Chris, it was a good time! Let it happen again, we got 17 pages out of it so far!