FINALLY after years of looking I picked up a modestly used 22.5" WSM

Have been a lurker for a long time but finally made my first WSM purchase! I had a choice (for essentially the same price from 2 different sellers) either a 18.5" or a 22.5" model. Ultimately I ended up on the 22.5" model even though it was older and not as well "accessorized" by the 18.5" model. I have a separate thread asking about it as I might just go buy that one too!.

Here are some pics of the 22" after I gave it a half-decent cleaning. It was quite when I purchased it begin with it but this was probably as good as I could get it without killing myself. The included cover was pretty ratty and beat up from being exposed to the elements but the cooker itself had barely any rust (just on the spots where the legs passed through in the fire bowl. The thermometer is not working so I will be getting a replacement for it soon.

Let the photos speak for themself!

Paid $330 CAD for it and they normally sell in my neck of the woods for $580 new including taxes.

This one looks great. Even the grates are shiny.

Congrats on your new toy. Our host, Chris Allingham, has a recommendation on replacement thermometers. He has tons of great tips. https://www.virtualweberbullet.com/installing-thermometer/
S

Lew Newby said:
Congrats on your new toy. Our host, Chris Allingham, has a recommendation on replacement thermometers. He has tons of great tips. https://www.virtualweberbullet.com/installing-thermometer/
Click to expand...

Thanks! Yes I'm super stoked to try it out but the winter is approaching so smoking may be a challenge unless I want to blow through a ton more charcoal to counteract the chill. I'm so impressed with my smoker's condition given that it was from 2013 and was stored outside. 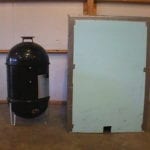 Cooking In The Wind, Rain & Cold - The Virtual Weber Bullet

Cold weather operating tips for the Weber Smokey Mountain Cooker, including the use of wind screens and enclosures, plus tips on cooking in the rain.

yes I saw those tricks and wonder if I can pull something like that off. I was thinking maybe I run the smoker in my shed. The thing that scares the crap outta me is the fact that you have hot burning coals inside the cooker that could potentially burn down my shed or deck. I even considered running the cooker in the garage and have the vent exiting to an exhaust fan that would then push the smoke outside. Probably easier to just build a windshield for it.
You must log in or register to reply here.
Share:
Facebook Twitter Reddit Pinterest Tumblr WhatsApp Email Share Link
Top