Inject pork shoulder evenly with injection solution. Apply a generous amount of rub onto meat. Pat so the rub will adhere. Place in a smoker and cook with indirect heat for 16 hours on 225°F. Serve with sauce on the side or paint shoulder with sauce the last 20 minutes of cooking. When done, the pork should pull off the bones easily. The internal temperature of the pork should reach 195°F.

I was JUST (like ten minutes ago) searching the web for this exact recipe!

You're scaring me Keri.
B

What does your intuition tell you would be a good sauce recipe to go with this for pulled pork sandwiches?

I am going to use this recipe as the basis for my Burning Man 72-butt rub.
K

Keri,
Have you done this rub yet? I was wondering if substituting turbanado sugar for the brown sugar would be wise? I haven't had much success with drying out brown sugar, the consistancy seems poor, and turbanado seems like a good substitute. As one of our gurus of Q, do you have any opinions on that?
G

I'm new to the board(been lurkin' for a while) and I'm considering making this recipe, this weekend. I've made the Renonwed Mr.Brown(fantastic) - but I have two ?'s for you:

1. Do you apply the rub any time prior to putting on the WSM - for example, the Renowned Mr. Brown had it applied 12 hours prior, and then again before placing on WSM.

2. Can you give an idea of how much injection to inject? (I'm a complete newbie with injections.)

Here's a pic of the Renowned Mr. Brown:

Erich, yes, you could substitute turbinado for the brown sugar with no problem. I've used both.

Joe, I've gotten to the point where, most times, I will apply my rubs, go build the fire while they sit, and put the meat on without letting it sit long at all. I DO let it sit long enough to form a liquidy layer over the meat, but since I usually do a mustard slather before the rub, that forms quickly.

Since Chris specified that the recipe is enough for 1 16-lb pork shoulder, that means that it will also suffice for two pork butts as well. I've seen Chris specify to use 1/2 oz of injection per lb of meat, but the way I inject, I'm lucky if half of what I inject actually stays in the meat. Thus... when I inject, I place each pork butt down into its own 2-gallon ziplock bag. I divide the total amount of injection made by the recipe and allow half to each butt. Keep the needle moving - you want to place liquid in as many small areas throughout the meat as possible, and not in one long streak. The bag will catch your overflow, and you can run it through the needle again.

Thanks Keri!! I'm making this tomorrow - it's a 14 pounder(untrimmed weight). Going to show the in-laws what real BBQ is.

I really appreciate the help!

14-lb??? That's a full shoulder, then, huh? I've done lots of butts, but have never done a full shoulder. That's a fine lookin' butt in the picture above. Fire up that digital camera and shoot a few of that shoulder - if you've been lurking, you know how we all love food ****...

It was so tightly packed that it was actually two seven pound shoulders(didn't realize). I took a pic of the package - but I caught the most heinous stomach virus from my one and a half y.o. son. It was horrible. But I still dragged my carcass up at 3:30am, cooked the shoulders at a steady ~230F for around 14hrs - the WSM is just unbelievable at holding a temp(did the Minion method). I was having a family get together - everyone absolutely raved about this pork! I was so sick I didn't pull it, but my MIL and wife did. Raves also about the Bastardized BBQ sauce too!

I used this recipe for a 20 lb whole fresh ham. Pulled off some of the fat strips so more smoke could permeate the meat. Took about 20 hours, turned out great. Cooked up a batch of the Basterdized bbq sauce too. Had the kids holding their nose, was pretty spicy, but delicous.

thanks for the great recipe!

I used this recipe for a picnic shoulder and ribs yesterday. Everyone loved them! I did not use the injection or sauce, just the rub. Thanks for the recipe, this one is a keeper.

Whoa...lets go back to the beginning...injecting meat is foreign territory for me...I DO want to try this hopefully within the next couple weeks...sounds great...

What do you use to inject the meat with? Is there a special kind of injector?

I can't say I've ever met an injected pork butt I liked but try it and see what you think.
G

I think my local grocery store has these pork shoulder's (Whole Fresh Picnic) on sale this week. Can anyone have a look at the picture below and confirm. I am not very familiar with this cut of pork, will it taste anything like a pork butt? How does this compare with a pork butt in taste, fat content, etc.

If the lower part of the leg (the shank or foreshank) is still attached then it is easy to recognize: 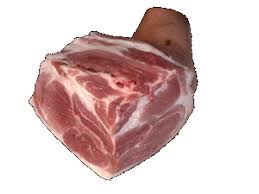 If it is somewhat trimmed one can still tell it's a picnic because of the narrow end:

If trimmed more and, especially, if the skin is removed, the picnic looks much more like a butt: 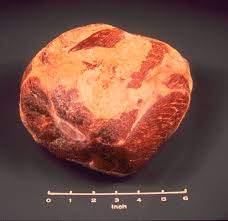 If bone-in, however, the picnic's bone is the round bone of the leg; the butt's is the flat bone of the shoulder blade.

The cooking approach and flavor of each are both quite similar. Some people prefer picnics over butts, some vice versa (like me).

Try it and see what you think. $.99/lb is about as low as one sees at Publix and is a decent price.

Welcome to the board.
E

<pre class="ip-ubbcode-code-pre"> What do you use to inject the meat with? Is there a special kind of injector? </pre>

You can buy the injectors in most grocery stores (at least around here), the same ones they use with the Cajun injection.

I know this is an older thread, but someone may run across it and have use for the update.
K