I have read many articles about wheel mods for a WSM. I would prefer to use 3" wheels going directly into the legs e.g. WSM not stitting in a frame. It seems a few think this might be tippy. I would appreciate any thoughts on this.

Staff member
I've never tried that myself. My concern is simply that the legs are not designed for sideways support. They're designed to support weight from above. Guys have been known to bend legs beyond repair just sliding the WSM across the bed of a pickup truck. I've seen guys install wheels at the end of each leg and then provide some cross support between legs to account for this concern.

CWilson said:
I have read many articles about wheel mods for a WSM. I would prefer to use 3" wheels going directly into the legs e.g. WSM not stitting in a frame. It seems a few think this might be tippy. I would appreciate any thoughts on this.
Click to expand...

I attached wheels directly to the legs on my 18. I have not had an issue so far. I just picked up a used 22 and am thinking I will do a triangle on the 22. Regardless of how you attach the wheels, you have to be careful moving it around.

I have attached casters to the legs of my 22 WSM and have no problems. As stated by Sparky you must be careful moving it around.
K

I used a mount like Chris built for my WSM 18 as it is stable but if I want to transport the smoker it comes off the wheels and into my truck or SUV and now stable to haul . Love it.
J

Harbor freight cart - so much better than wheels

The simple holed angle bracket works well. Security would really need a bit more. Removable to help weight and storage, and portability. The harbor freight, yeah that is the way to go. Love that you flipped the top.

If it's not perfectly level...... Perfectly, which you won't get just on the legs by themselves trying to put a wheel on a curved piece of metal, then the elevation of that side of the wsm changes as ithe caster swings around. It can be significant.... Making the grill surface not level.
.

I agree three or even four inch casters will be better for rolling unless you're rolling on a solid concrete smooth surface. But.... Those effects from the caster rotated, are magnified with larger casters over smaller.

Heres how i did mine. I have three inch wheels and I wish I had four dhen roling on wood decking. I made a frame out of some scrap steel strip, and use the existing holes in the aluminum legs to attach the frame to it with bolts.
I spent some time making sure everything was level. It's involved adjusting the bend on the pieces that attached to the WSM legs..... That metal was bent with heat. But my wheels can spin around as it rolls , etc and the WSM stays level. I've seen some photos of other people's truly horrid attempts to out wheels on legs directly which obviously are extremely flawed 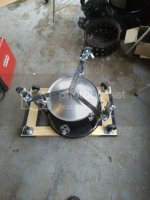 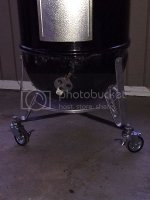