I don't want to hijack David's thread, so I'll continue my journey here. I started down this path before I realized David had already done most of it. I design, modify and service laboratory furnaces as part of my job as an instrument tech. I am also a long time WSM user and outdoor cook, so this was inevitable. I'm just starting to figure this out, so I'll update as I go along. Using the element David suggested I was able to reach 226 fairly quickly with an empty cooker. The temp was still rising, but I'm concerned that part of this was radiant heat. No pan in place or heat diffuser. It was about 45 degrees outside though. I'm beginning to think it would be easier to buy an old oven and build a controller for it, but this is more fun. I had to use a Hunsaker vortex plate to support the element. I'll probably put the AMAZN under it for smoke. 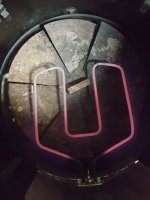 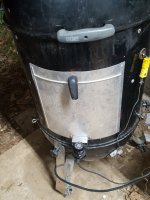 For continuity this is what I posted on the other thread:
I built a smaller version of this using, coincidentally, the same hot plate and AMAZN that the OP used. On the first run the pellets caught on fire which melted the hotplate and the smoker hit 500+ degrees. The toxic black smoke tainted the summer sausage. That's what prompted me to a search that lead me here. I'm now building one using the other element with the door mod on a 22in WSM. I built a PID controller, although now I see the Auber and that would've been a lot easier. If I can't get the temps in the 22 I'll switch to a 240v oven element. I also have an older 18in WSM, but I like the room in the 22 and have the Cajun Bandit Stacker for it. If it doesn't offend the OP I'll post pics and the results in the next few days. I can tell you at this point the door mod on the 22 puts the element up too high to rest on the charcoal ring. For now I have a baking pan upside down on the ring and that provides enough height to rest the element. Cutting out two of the small vent holes would place the element perfectly on the charcoal grate, but I'm saving that option for after the proof of concept. I have the silicone cover for the 22, so that may also get my temps up if the 1500w element won't. My biggest question is do I need a drip pan or can the grease drip on the element?
Attached are pics of the first attempt with the hot plate.

Round 3: I tried this setup with the water pan half full. I'm thinking this removes any radiant heat and somewhat simulates cold food in the smoker. The max temp I could reach was 205. This is enough for summer sausage though, so I'll try that this weekend. Sausage, salmon and jerky is all I really want electric for anyway. I'm thinking a 240 oven element may be next just for a faster response.
D

I moved this from another thread to prevent hijacking it: With the Cajun Bandit Stacker installed I could only hit 177 degrees. Ambient was around 40. Disclaimer: Don't try this unless you know what you're doing: Looks like the 240 element will be needed to easily maintain higher temps. I'll install a 240v receptacle this week, rewire the controller and source an element. I'm going to want a ground wire going to the WSM at this point. One short to the cooker could make the whole thing a shock hazard. I'm also going to add a limit controller with a second thermocouple in case the SSR shorts. The design I'm working towards will use an SCR controlled either by the Heatermeter or a PID controller with ramp/soak. The ramp/soak would be nice for SS. I can tell it to go to 120, soak 1 hour, then go to 140 etc. and also tell it how fast to get there. This way I don't blast the element on at full throttle while the upper part catches up. I.e. go to 140 at 5 degrees per minute. The ramp would compensate for smoker load, wind and ambient temps.
D

240 test build completed. First the bad part: I didn't get the massive heat advantage I expected. I can only hit 250 on a cold day with an empty smoker. Now the good: It controls much better at SS temps and I no longer need the stacker to get enough vertical space to hang the sausages. I put the oven element on the charcoal grate with the ring as a spacer for the water pan. this gave me 23 inches from the pan to the top grate. Current draw is only 10.3 amps. The wiring is temporary. The pics below will better explain it: 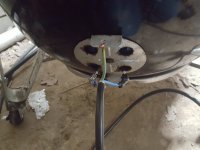 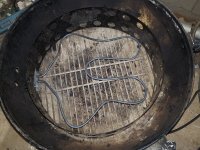 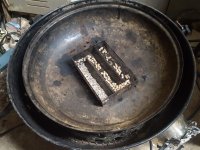 Well...SS cook went great. Ran it for 20 hours with no issues. Held temp all night with an ambient 25 degrees and no wind.
D 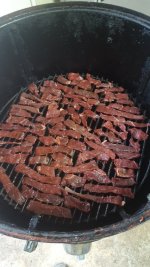 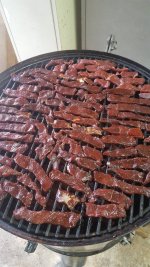 First rib cook went well. Maintained 280 without issue. Ribs were excellent. Looks like I can get another 1k watts with a broiler element, so 3500. I'll try this to see if it's worth the trouble. What the WSM really needs is insulation to reduce the required energy needed. Overall I'm really happy with the 240v mod for the 22.5 WSM, other than the fact I feel like I've gone to the dark side using electricity. I'm pretty convinced that the 120v element is not going to work unless you're smoking salmon or cheese.
D

Switched to a 3600w element and it made a big difference, I reached 320 degrees in an empty cooker before shutting it down and it was still climbing. I think this will work much better than the 2400w I was using. The 240 volt element makes this conversion a viable option.
R

Darren L said:
Switched to a 3600w element and it made a big difference, I reached 320 degrees in an empty cooker before shutting it down and it was still climbing. I think this will work much better than the 2400w I was using. The 240 volt element makes this conversion a viable option.
Click to expand...

What type insulating material are you thinking about using to insulate the wsm?

No shame in going to the dark side. A BTU is a BTU. I use a 1500w heating element for my sausage smoker.

Thanks for the update. Please keep us update.

My first thought for insulation is a welding blanket to wrap around the drum portion. For now I'll probably keep trying the silicone cover, although I'm not sure how much of a difference it makes. Guess that should be my next test. That 3600w element really cranks out the heat. I had to pretzel it up pretty good while it was still green to make it fit. 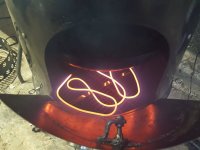 Darren, this is s great thread and very interesting. Please keep the updates coming. I did not realize that heating elements are malleable out of the box. Good to know. Not sure for what but one never knows.

You can pretty much bend an oven element into whatever shape you need, so I'm getting cheap ones from Amazon for these test. The hard part is finding the wattage since most listings only call out what appliance they'll fit. The average price is $25 or less. With a cheap PID controller you can set whatever temp you want with surprising accuracy.
D

Just an update on this project. I'm pretty much all electric for the moment. Briskets, ribs and butts have all turned out awesome. The pellets in the Amaz-n thing don't impart much smoke flavor, but people seem to actually prefer it that way. I'm going to try 6 butts at once this weekend with the Cajun Bandit Stacker. Don't know if I'll have enough wattage for that much volume and cold mass. I discovered that you need the top vent wide open to prevent getting a smoke/tar sludge on everything.
D

This is my method for using pellets as a smoke source:

Darren L said:
Just an update on this project. I'm pretty much all electric for the moment. Briskets, ribs and butts have all turned out awesome. The pellets in the Amaz-n thing don't impart much smoke flavor, but people seem to actually prefer it that way. I'm going to try 6 butts at once this weekend with the Cajun Bandit Stacker. Don't know if I'll have enough wattage for that much volume and cold mass. I discovered that you need the top vent wide open to prevent getting a smoke/tar sludge on everything.
Click to expand...

How did the six butt cook turn out? any pics
D